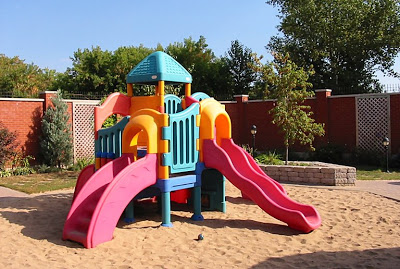 Children’s play equipment and the decline of the American yard.
By Tom Vanderbilt / April 2, 2008

The next time you drive down a street in suburban or exurban America, pay careful attention to the yards. Lurking somewhere, either peeping out from the back or nakedly displayed right in front, some form of children’s play equipment, typically in plastic and typically in some bright primary color, will probably be splayed on the grass.

I’d like to raise just one question about this picture of domestic bliss: How often do you actually see a child playing on, or near, one of these devices?

On a recent weekend trip through a posh Connecticut suburb, the kind with moss-covered stone walls and dense canopies of mature trees, I was dismayed to find the sylvan harmony of the scene constantly disrupted by garish blights, from wavy slides to inflatable contraptions of the kind once relegated to seasonal carnivals. It was as if a McDonald’s PlayPlace—some alien, mother-ship PlayPlace—was spawning its miniaturized brood across the landscape (and simultaneously vaporizing the kids).

The Web site of Little Tikes—which boasts an American flag banner noting that some of its polycarbonate products are “Made in the USA” and then, just below, slightly less triumphantly, “or Made in the USA with US and Imported Parts”—offers a representative field guide to this kiddie sprawl, listing such injection-molded contraptions as the “Endless Adventures Slide & Hide Tower” and the “6-in-1 Town Center.”

The phrase “fun that lasts” pops up often on the Little Tikes Web site, as if the manufacturer were trying to allay the suspicion of the purchasing parent that the giant red, yellow, and blue elephant he or she is buying will soon be nothing more than a mowing obstacle. For parents were once children, and they know the iron law: The more time spent in assembling a toy, the less it will actually be used. (A corollary: The packaging is inevitably more interesting than what’s inside.) My sister-in-law reports that each year, her upstate New York town’s annual “cleanup” day produces a massive haul of slides, swings, tubes, and tunnels, all of which seemingly have half-lives of one weekend and swiftly find themselves headed for the landfill.

The environmental implications alone—each piece of equipment must represent a lifetime’s worth of plastic shopping bags—are reason enough to eschew this stuff. Then there are the aesthetics. On this, I’m hardly alone in my displeasure. In her account of the perils of suburban gardening, Paths of Desire, Dominique Browning recounts how a new neighbor installed an enormous swing-set with a plastic slide facing her house: “Obviously, I had developed an exaggerated aversion to the plastic; I’m the first to admit it. But brightly colored plastic (and who decided kids enjoy these colors anyway?) in the garden is one of my peeves.” Or, as one blogger more bluntly put it, “The only thing worse than a neighbor with fifteen different pieces of play junk in his front yard is a neighbor with fifteen different pieces of insanely brightly colored play junk in his front yard.”

Before you dismiss such complaints as mere aesthetic snobbery, consider another of Browning’s pet peeves: “Why [does] every yard have to replicate the same debris, swing after swing, marching down the backs of the houses?” Her question highlights a few larger problems with this seemingly benign landscape element. The first is the decline of the playground. In her book American Playgrounds, Susan Solomon notes how the fear of injuries and their litigious consequences forced the closing, or banal “post-and-platform” retrofitting, of many playgrounds. Gone are the kinds of things that defined my own childhood: terrifying metal “monkey bars” pitched over a pit of hard gravel or the towering, twisting, all-metal “tornado slide,” as we called it, which was at once the most exhilarating and the most dangerous thing in my young life.

But, injuries aside, a larger specter began to haunt playgrounds, Solomon notes: “Told incessantly to be mindful of lurking dangers and the people who might inhabit the outdoors, [paranoid] parents often defer trips to public spaces. Going to a playground becomes too exhausting for a parent to contemplate.” And so instead of a communal play space, each yard becomes a (rarely used) playground unto itself.

It’s not just fear that underlies the American tendency toward elaborate play furniture. One parent-blogger recounted how his wife had purchased a massive water slide from Sam’s Club. This led him to reflect that, once upon a time, only one house on each block had “the cool thing.” “Today,” he writes, “I live in a neighborhood where, if one kid gets a toy, everybody else eventually ends up with the same thing, albeit bigger and more ghastly looking.”

Yes, it’s the aspirational spending race brought to the lawn. Of course, it was already there, in the execrable outrages committed in the name of “outdoor living,” the kind routinely chronicled in the pre-recessionary Weekend section of the Wall Street Journal (the Masters and Johnson of bourgeois anxiety): the grotesque waterfalls coursing over volcanic rock from Hawaii, the waterproof plasma televisions hovering over the pool, the backyard pizza ovens. But this impulse has spread to the short-pants set. How else to explain the ridiculous ensembles found at the higher end of the children’s play equipment market? At Posh Tots, for example, one can purchase, for $122,000, a “Tumble Outpost” filled with ropes and swings and ladders, the kind that would sustain an entire playground but is meant for private consumption. Or feast your eyes on the capacious “luxury playhouses,” like the “pint-sized plantation” known as “Oakmont Manor.”

I have come to think of all these things, in both their lack of use and aesthetic alien-ness, as being symptomatic of the decline of the American lawn. I don’t mean grass per se but, rather, the whole relationship of the house to its exterior; the meaning of the outdoor space as a pastoral enclave in a larger natural setting; the civility and beauty brought by the carefully considered arrangement of plants, trees, and shrubs—the sort of things one used to see in the so-called “garden suburbs.”

U.S. Census Bureau data tell us that as American house sizes have grown (despite shrinking family sizes), the size of lots has actually shrunk. It is now not uncommon to see massive houses crowding to the very edge of their property line. Whatever lot is left is typically barren grass with a few random shrubs installed by landscapers (the lawn version of a bad hair-plug job). The scalped appearance of these lots is usually not accidental—developers often find it easier to cut down mature trees than to work around them.

And so then one sees it: the asymmetrical, triple-garage-fronted, architecturally confused house, towering over a lawn that’s utterly stark—as if surrounding a prison so escapees can be seen—except for the assemblage of plastic junk and recreation equipment scattered here and there. Which is not being used, of course, because the entire family is inside the giant house, where the sounds of Nintendo echo off the high walls of the great room. The bright plastic begins to look like a memorial to the noble, dated idea of children playing outdoors. As historian Kenneth Jackson notes in his book Crabgrass Frontier, the shift to largely indoor living, accompanied by the much-reported decline of gardening and encouraged by everything from air conditioning (often now needed because houses seem to lack shade cover from trees) to front porches being replaced by garages, has left yards—when they even exist—curiously empty. “There are few places as desolate and lonely as a suburban street on a hot afternoon,” he writes.

The unused plastic playthings and private playgrounds scattered in the barren yard speak not only to vanishing outdoor play but to a larger cultural disconnect from nature, from one’s own environment. But there is a simple solution for this. Instead of buying cheap, potentially toxic plastic water slides and the like, plant a garden. Plant a tree. Plant something. It may not impress your neighbor, but it will last longer, it will look better, and it will have a better effect on the environment than plastic slides. And there is another benefit. In his book Second Nature, Michael Pollan writes touchingly about a hedge of lilac and forsythia at his childhood home on Long Island, N.Y. To the adult eye, the hedges were simply flush against the fence. But he had his own secret garden, a space between the hedge and the fence. “To a four-year-old, though, the space made by the vaulting branches of a forsythia is as grand as the inside of a cathedral, and there is room enough for a world between a lilac and a wall.” He didn’t need a plastic playhouse or an obscene mini-McMansion to find space to play. The natural world, when it is embraced, not only provides the opportunity for play—I imagine many of you, like me, have fond childhood memories of a swing hanging from a tree, or a tree house, or jumping in leaves, or running through the sprinkler as it watered the tomatoes—but connects us all to something larger and more lasting.

[Tom Vanderbilt is the Brooklyn-based author of Survival City: Adventures Among the Ruins of Atomic America and writes for many publications including the New York Times, Nest, the London Review of Books, and I.D.]

This entry was posted in RagBlog and tagged American Society, Environment. Bookmark the permalink.