An Outrageous Miscarriage of Justice 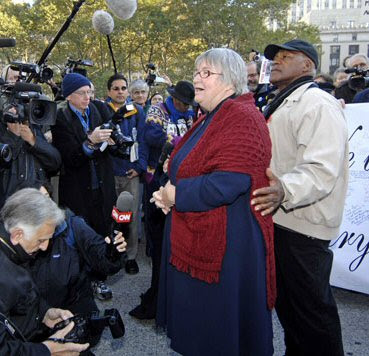 On April 9, 2002, Attorney General John Ashcroft made a symbolic visit to “Ground Zero.” While in New York, he held a well-publicized press conference at the US Attorney’s Office and used the occasion for an indictment. Four individuals were named on charges of conspiracy and materially aiding a terrorist organization. One of them was long-time civil rights lawyer Lynne Stewart. On the same day, FBI agents arrested her at her home and illegally seized documents there and from her office that are protected by attorney-client privilege.

In July 2003, Federal District Court Judge John Koeltl (a 1994 Clinton appointee) dismissed the original charges for being “unconstitutionally void for vagueness” and because they “revealed a lack of prosecutorial standards.” Nonetheless, Stewart was symbolically reindicted on November 22, 2003 (the 40th year anniversary of John F. Kennedy’s assassination) on five counts of aiding and abetting a terrorist organization under the 1996 Antiterrorism Act. Specific charges included:

* “conspiring to defraud the United States;

* conspiring to provide and conceal material support to terrorist activity;

* providing and concealing material support to terrorist activity; and

Stewart was also accused of violating US Bureau of Prisons-imposed Special Administrative Measures (SAMS) that included a gag order on her client, Sheik Abdel Rahman. These measures are imposed on some prisoners to forbid discussion (even with an attorney) of topics DOJ claims are outside the scope of their “legal representation.” It’s all very vague, does more to harass and obstruct justice than protect state secrets, yet Stewart was forced to accept them to gain access to her client.

In her case, police state-type attorney-client monitored conversations provided the basis for her indictment. However, engaging in this practice stretches the limit of the law, gives DOJ sole authority to decide how far and for what purpose, and in this instance egregiously overstepped it by charging defense counsel with aiding and abetting terrorism for representing her client as required.

At former US Attorney General Ramsey Clark’s request, Stewart agreed to join him as a member of Rahman’s court-appointed defense team. He was convicted in his 1995 show trial and is now serving a life sentence for “seditious conspiracy” in connection with the 1993 World Trade Center Center bombing despite evidence proving his innocence.

However, in what’s now common practice, the government’s case related more to his affiliations and anti-western views than specific evidence presented. Rahman was connected to the Egyptian-based Al-Gamaa al-Islamiyya (Islamic Group) – a 1997 State Department-designated “Foreign Terrorist Organization (FTO). Ironically in the 1980s, he was handled much differently as a “valuable (CIA) asset” for his influential role in recruiting Mujahadeen fighters against the Soviets in Afghanistan. It was no accident that he got a US visa, green card and State Department-CIA protection for as long as he was valued. When he wasn’t, he became a target along with Lynne Stewart who represented him at trial.

Stewart’s charges were trumped up, outrageous, and likely first time ever instance of a defense attorney in a terrorism case facing terrorism-related counts – for doing her job as the law requires and that renders attorney-client confidentiality sacrosanct under our criminal justice system. No matter, if convicted, she faced a possible 30 year sentence.

In America’s “war on terrorism,” her precedent-setting case is chilling, and president of the Center for Constitutional Rights, Michael Ratner, explained it: Its “purpose….was to send a message to lawyers who represent alleged terrorists that it’s dangerous to do so.” It’s also an effort to exploit the current atmosphere, incite fear and suspicions, stifle dissent, and make it just as risky for anyone with openly critical views of government policies. In Police State America, we’re all Lynne Stewarts.

At the time of her indictment, her attorney, Michael Tigar, explained what was at stake:

“This case (still ongoing) is an attack on a gallant, charismatic and effective fighter for justice (and has) at least three fundamental faults: (it) attack(s) the First Amendment right of free speech, free press and petition; (it) attack(s)….the right to effective assistance of counsel ….chills the defense….(and) the ‘evidence’ in this case was gathered by wholesale invasion of private conversations, private attorney-client meetings, faxes, letters and e-mails. I have never seen such an abuse of government power.” In America’s “war on terrorism,” many other defense attorneys can cite similar instances of lawlessness and injustice today.

However, in targeting Stewart, DOJ may have gotten more than it bargained for. Whatever the outcome, her case shamed the government, gave her worldwide recognition, made her a powerful symbolic figure, and elevated her to iconic stature. For her honor, devotion to principles, and lifetime of service to society’s most abused, she deserves it and more.

Throughout her 30 year career, she never shunned controversy or her choice of or duty to clients. She represented the poor, the underprivileged and society’s underdogs and unwanted who never get due process unless they’re lucky enough to have an advocate like her. She knew the risks and understood the state uses every underhanded trick possible to convict these type defendants and overwhelm, outspend and/or discredit their counsel doing it.

Nonetheless, she did what the American Bar Association’s Model Rules state all lawyers are obligated to do: “devote professional time and resources and use civic influence to ensure equal access to our system of justice for all those who because of economic or social barriers cannot afford or secure adequate legal counsel.”

Read all of it here.
counterpunch / The Rag Blog

“Free Lynne! Free Lynne!” shouted at least 100 of her supporters massed outside the courtroom, some of them raising their fists in a Black Power salute, others singing from “The Battle Hymn of the Republic.” They had gathered earlier for a rally in Foley Square to support Stewart’s efforts to be spared prison, perhaps with a sentence of home confinement. She has undergone radiation therapy for breast cancer.

This entry was posted in RagBlog and tagged Criminal Justice, Terrorism. Bookmark the permalink.