Analysing the Conflict in Southern Iraq

Read the LA Times headline! This wouldn’t be happening if BushCo could have stayed the hell out of the Middle East. And the MSM doesn’t help by pushing buttons that make it sound like the US is always the “good guy.” It ain’t so. Juan Cole recommends this as a decent analysis of the Shiite rivalries. 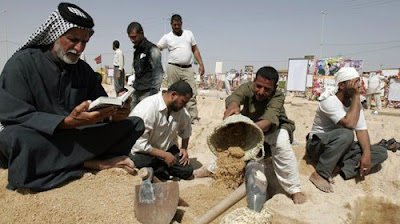 Graves are prepared for Mahdi Army fighters near the city of Najaf.

BAGHDAD — The biggest surprise about the raging battles that erupted last week in southern Iraq was not that the combatants were fellow Shiites, but that it took this long.

Enmity has long festered between the two sides: one a ruling party that has struggled against the widespread perception that it gained power on the back of the U.S. occupation, the other a populist movement that has positioned itself as a critic of the U.S.-backed new order.

As they vie for power before October provincial elections that will determine who controls the oil-rich south, the stakes are high not only for the Supreme Islamic Iraqi Council, the largest Shiite faction in the Iraqi coalition government, and the Mahdi Army, the militia loyal to cleric Muqtada Sadr.

The conflict also poses great difficulties for the Americans, who are widely seen as siding with the Supreme Islamic Iraqi Council and Prime Minister Nouri Maliki’s Islamic Dawa Party against Sadr.

The Iraqi government’s offensive in Basra has spelled the end to a seven-month cease-fire by Sadr’s militia in all but name.

In an ominous sign Saturday, Sadr in a rare TV interview praised armed resistance. Separately, he urged his followers to defy Maliki’s ultimatum to surrender their weapons.

Sadr’s cease-fire, which he imposed in August after his loyalists clashed with the Supreme Islamic Iraqi Council’s militia in the southern city of Karbala, was widely credited with helping calm Baghdad.

The U.S. military now risks forfeiting gains with the Sadr group, arguably the most popular Shiite political movement across Iraq. Already, U.S. officers have reported an increase in the number of attacks against them in Baghdad, where soldiers had benefited from the Mahdi Army’s tacit cooperation.