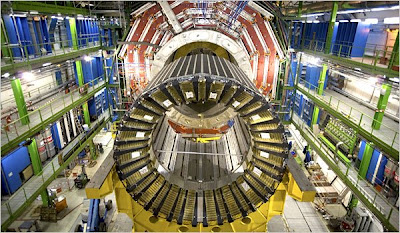 Part of a detector to study results of proton collisions by a particle accelerator that a federal lawsuit filed in Hawaii seeks to stop. Photo by Valerio Mezzanotti / NYT.
Asking a Judge to Save the World, and Maybe a Whole Lot More
By Dennis Overby /New York Times / March 29, 2008

More fighting in Iraq. Somalia in chaos. People in this country can’t afford their mortgages and in some places now they can’t even afford rice.

None of this nor the rest of the grimness on the front page today will matter a bit, though, if two men pursuing a lawsuit in federal court in Hawaii turn out to be right. They think a giant particle accelerator that will begin smashing protons together outside Geneva this summer might produce a black hole or something else that will spell the end of the Earth — and maybe the universe..

Scientists say that is very unlikely — though they have done some checking just to make sure.

The world’s physicists have spent 14 years and $8 billion building the Large Hadron Collider, in which the colliding protons will recreate energies and conditions last seen a trillionth of a second after the Big Bang. Researchers will sift the debris from these primordial recreations for clues to the nature of mass and new forces and symmetries of nature.

But Walter L. Wagner and Luis Sancho contend that scientists at the European Center for Nuclear Research, or CERN, have played down the chances that the collider could produce, among other horrors, a tiny black hole, which, they say, could eat the Earth. Or it could spit out something called a “strangelet” that would convert our planet to a shrunken dense dead lump of something called “strange matter.” Their suit also says CERN has failed to provide an environmental impact statement as required under the National Environmental Policy Act.

Although it sounds bizarre, the case touches on a serious issue that has bothered scholars and scientists in recent years — namely how to estimate the risk of new groundbreaking experiments and who gets to decide whether or not to go ahead.

The lawsuit, filed March 21 in Federal District Court, in Honolulu, seeks a temporary restraining order prohibiting CERN from proceeding with the accelerator until it has produced a safety report and an environmental assessment. It names the federal Department of Energy, the Fermi National Accelerator Laboratory, the National Science Foundation and CERN as defendants.

According to a spokesman for the Justice Department, which is representing the Department of Energy, a scheduling meeting has been set for June 16.

Why should CERN, an organization of European nations based in Switzerland, even show up in a Hawaiian courtroom?

In an interview, Mr. Wagner said, “I don’t know if they’re going to show up.” CERN would have to voluntarily submit to the court’s jurisdiction, he said, adding that he and Mr. Sancho could have sued in France or Switzerland, but to save expenses they had added CERN to the docket here. He claimed that a restraining order on Fermilab and the Energy Department, which helps to supply and maintain the accelerator’s massive superconducting magnets, would shut down the project anyway.

James Gillies, head of communications at CERN, said the laboratory as of yet had no comment on the suit. “It’s hard to see how a district court in Hawaii has jurisdiction over an intergovernmental organization in Europe,” Mr. Gillies said.

“There is nothing new to suggest that the L.H.C. is unsafe,” he said, adding that its safety had been confirmed by two reports, with a third on the way, and would be the subject of a discussion during an open house at the lab on April 6.

“Scientifically, we’re not hiding away,” he said.

“The possibility that a black hole eats up the Earth is too serious a threat to leave it as a matter of argument among crackpots,”

But Mr. Wagner is not mollified. “They’ve got a lot of propaganda saying it’s safe,” he said in an interview, “but basically it’s propaganda.”

In an e-mail message, Mr. Wagner called the CERN safety review “fundamentally flawed” and said it had been initiated too late. The review process violates the European Commission’s standards for adhering to the “Precautionary Principle,” he wrote, “and has not been done by ‘arms length’ scientists.”

Physicists in and out of CERN say a variety of studies, including an official CERN report in 2003, have concluded there is no problem. But just to be sure, last year the anonymous Safety Assessment Group was set up to do the review again.

“The possibility that a black hole eats up the Earth is too serious a threat to leave it as a matter of argument among crackpots,” said Michelangelo Mangano, a CERN theorist who said he was part of the group. The others prefer to remain anonymous, Mr. Mangano said, for various reasons. Their report was due in January.

This is not the first time around for Mr. Wagner. He filed similar suits in 1999 and 2000 to prevent the Brookhaven National Laboratory from operating the Relativistic Heavy Ion Collider.

That suit was dismissed in 2001. The collider, which smashes together gold ions in the hopes of creating what is called a “quark-gluon plasma,” has been operating without incident since 2000.

This entry was posted in RagBlog and tagged Science. Bookmark the permalink.