Another Leftist Government for Latin America 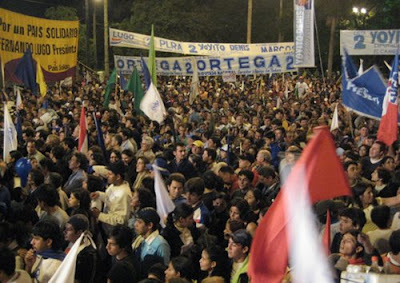 Paraguay VotesAsuncion, Paraguay – Even before last night’s official results were announced, Lugo supporters were in the streets celebrating what many called a dream come true.

“I came here to vote for Lugo, and now I’m here for him. I came here to vote, and I voted, and now I’m here, present for my president. President Lugo, President Lugo!” chanted an elderly Graciela Bogadin in both Spanish and Guarani. The people around her cheered. Bogadin is a Paraguayan who has lived in Argentina for many years. She is one of the thousands who came back to vote in yesterday’s historic elections and who descended on Asuncion’s Heroe’s Pantheon last night for the victory celebration.

“I want to pray that the good god bless our Paraguay, that deserves better horizons, better times, for absolutely all of her children, those who are in Buenos Aires, or New York, or Spain or Brazil, in whatever part of the geography of the planet, here is a country that recognizes them, appreciates them, and we also count on them,” said a powerful President-elect Fernando Lugo only an hour earlier at a nearby press conference, as if talking directly to Bogadin.

“We are convinced that this country has the right to better horizons,” said Lugo. “We’ve felt it in the pain and tears of so many mothers, and the hopelessness of so many youth, and the suffering of so many children, and a special invitation to all of the Paraguayan political class, to join together for this country, which was great, and together we believe will once again be great in the concert of Nations.”

Read all of it here. / Upside Down World / The Rag Blog