We Think the BushCo Lie Is Bigger Than That 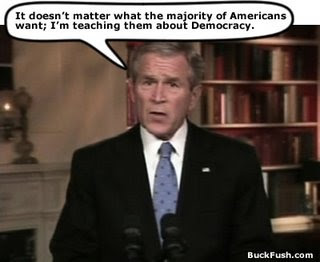 The Sunday Times’ article detailing the massive, secret coordinated campaign by the Pentagon and all the leading television news channels to sell and defend the administration’s Iraq policy is a critical piece of investigative journalism. David Barstow provided meticulous and aggressive reporting, even referencing how The Times’ amplified Pentagon “surrogates” without sufficient disclosure for readers. The Times also deserves credit, both for running the lengthy piece and suing the government to obtain related documents. (Read the whole thing here, or try this YouTube excerpt.)

The Nation’s Katrina vanden Heuvel is urging Congress to investigate the program exposed by the article: In its rigorous documentation of the relationship between the government, the networks and retired military analysts, the lineaments of the corrosive structure and impact of a new military-media-industrial complex are exposed. This corrupt complex demands investigation by all relevant Congressional committees…

Glenn Greenwald, who has written extensively about the media’s pro-war bias and undisclosed conflicts of interest, flags the galling (non)-response of several news organizations, near the end of the article:

The most incredible aspect of the NYT story is that most of the news organizations which deceived their readers and viewers by using these “objective” analysts — CBS, NBC, Fox — simply refused to comment on what they knew about any of this or what their procedures are for safeguarding against it. Just ponder what that says about these organizations — there is a major expose in the NYT documenting that these news outlets misleadingly shoveled government propaganda down the throats of their viewers on matters of war and terrorism and they don’t feel the least bit obliged to answer for what they did or knew about any of it…. The single most significant factor in American political culture is the incestuous, extensive overlap between our media institutions and government officials.

The article reports that most of the news organizations either didn’t know or didn’t care about their paid analysts taking direction from the administration while claiming to neutrally assess its policies; or taking expensive trips paid by the administration; or meeting secretly with senior administration officials and plotting military or political strategy; or competing for military contracts.

So what does it take to disqualify a former general from on-air analysis?

While the article does not cover this incident, CBS did fire Maj. Gen. John Batiste (Ret.) for criticizing President Bush’s Iraq policy in a television ad. As the former commander of the Army’s First Infantry Division, which was deployed to Iraq in 2003, Batiste had unassailable credentials, but his views were too much for CBS. This larger context is key, because while the Times exposed a sophisticated, deceptive domestic propaganda campaign for the administration, the flip-side is harder to document. But antiwar perspectives are routinely marginalized or scrubbed from televised debate, even when offered by our nation’s brave military leaders.

As ABC News was reminded last week, the public expects more integrity and substance from these news organizations. They are egregiously late in even commenting on these new reports, let alone reforming their policies, which demonstrates why Congress must investigate this propaganda program — and the marginalization of experts who are critical of the war or the government.

This entry was posted in RagBlog and tagged Conspiracy, Iraq, Media. Bookmark the permalink.