On November 1st, in Montpelier, the capital of Vermont, one hundred activists gathered to protest against General Dynamics, a weapons manufacturer operating in the state. The diverse group of activists rallied in support of building a peace economy and movement beyond election day. Speaking to the crowd in front of the statehouse, VT-based filmmaker and writer Eugene Jarecki talked about the presidential election and activism. “There’s a moment of real crossroads here,” he said. “But it’s a crossroad for all of us not to be happy and go to bed but for all of us to be absolutely unrelenting and dissatisfied until real change happens.”

General Dynamics has profited more than any other defense contractor from the Iraq War; its revenues have tripled since 9/11 and in 2007 it earned $27 billion. In spite of this wealth, the company received $3.6 million in Vermont tax breaks in 2007. It’s not as though the state doesn’t need this money – bridges and roads are in disrepair, 2/3 of Vermonters can’t afford the median price of VT home, and 60,000 residents in the small state lack health insurance.

These realities underscored the November 1st rally. While the VT Food Not Bombs group spooned out lunch, and seasoned anti-GD activists mingled with children and college-aged activists, Jarecki and others spoke of the billions of dollars spent on US defense while unemployment soars and the funding for schools and healthcare is slashed. 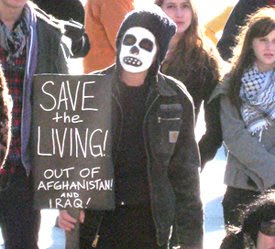 I asked Jarecki, the producer of “Why We Fight” – a film which explores the roots and results of America’s military industrial complex – to comment on the irony of GD operating in VT, a state known for its liberal politics and green businesses. “It’s a stain on Vermont’s record,” he said. “Vermont is at its best when it strays from the widespread corruption that is a national affliction.”

On May 1st of this year, 10 activists committed civil disobedience by sitting in the lobby of the GD weapons plant in Burlington, VT demanding that “General Dynamics stop giving campaign contributions to the politicians responsible for regulating it, stop making Gatling guns, missiles and other weapons of mass destruction and give back the $3.6 million dollars in Vermont tax breaks General Dynamics received in 2007.” Later, in October, a panel was organized in Montpelier to share stories and strategies from VT activists who had been organizing against GD for decades.

At the November 1st rally, many spoke of the need to continue organizing in spite of Barack Obama’s imminent victory. Lea Wood, an “all around activist” from Montpelier, said, “we have to push Mr. Obama to make sure he’s heading in the right direction.” Wood, a veteran of World War II, said she is surprised when politicians talk about how long it will take to bring the troops home. “After World War II, people came home pretty quickly. Now they say it’s going to take years to bring the troops home from Iraq and Afghanistan – that’s ridiculous.”

Vermont State Senator Ann Cummings was also in the crowd. She agreed that GD was profiting from the wars, and receiving tax breaks in spite of the state’s limited budget. “But I’m here mostly to hear what my constituents are concerned about, I take that very seriously.” Cummings added that she would look into the tax breaks that GD receives and see what can be done.

Matt Howard, an Iraq War Veteran, spoke of why he attended the protest. “I happened to have witnessed the results of the kinds of weapons produced by General Dynamics. I’ve seen first hand what they look like on the ground when they come in contact with real human flesh. As a citizen of Vermont, and a former marine, I cannot in good conscience support our state tax dollars going to enrich the coffers of a company that is making a fortune off the misery and blood of others.”

[Benjamin Dangl is the editor of TowardFreedom.com, a VT-based progressive publication.]