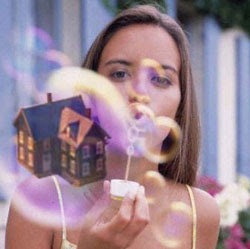 Treating the disease, not the symptoms: a comparison of proposed solutions to the problems resulting from the bursting of the housing bubble.
By Sid Eschenbach / The Rag Blog / November 16, 2008

There have been a variety of proposals for this line of attack, including recently by Martin Feldstein in the WSJ. I have also proposed a plan, outlined below. Following my plan is a précis of Feldstein’s plan, followed by a comparison of both. There is great merit in a strategy of treating the disease and not the symptoms.

There are 7.2 million subprime mortgages out there worth 1.3 trillion, of which possibly 70% of them have exploding rate mortgages, which means about 5 million have exploding rates. Exploding rate mortgages account for 93% of the bad mortgages, which means that possibly 4.5 million of these will go bad, or 63% of the total, at a value of $820 billion and an average value of $180,000. If the ARMs reset from 7% to 12%, the increase in monthly payments is about $590 per month. $590 per month times the total of 5 million is about 3 billion dollars per month. Therefore, $700 billion would pay for 233 months, or nearly 20 years of payments… and this without renegotiating the loans so that maybe they just go to… say… 9% with the government picking up the difference. The holders of all the CDO’s would then be able to value them, mark them back to market, solve their balance sheet problems… financial problems solved.

From the housing markets point of view, it would relieve the pressure of the foreclosure spiral forcing down prices more than ‘normal’, and provide the time cushion necessary for the economy to recover and housing to rebound. Any homeowner who elected to avail himself of the help would give up all or a part of the appreciation of the property over time, penalizing them for getting jammed up, but not penalizing the guy who is paying his mortgage, playing by the rules, and betting that his home is indeed a good investment over the long term.

If the sub-prime ARMS were renegotiated down to 9%, the monthly payments the government would be liable for would be an average of $225 per house per month, or $1.1 billion annually. The $700 billion under those circumstances would be good for 636 months, or 53 years…

So in review, the proposal is to:

Benefits of the action:

This would be a much cheaper and more effective way to solve the problem… renegotiate the exploding rate, paying the difference and profiting from the increase in asset value over time.

The following is the proposal advanced by Feldstein in the WSJ:

The bailout bill doesn’t get at the root of the credit crunch.

A successful plan to stabilize the U.S. economy and prevent a deep global recession must do more than buy back impaired debt from financial institutions. It must address the fundamental cause of the crisis: the downward spiral of house prices that devastates household wealth and destroys the capital of financial institutions that hold mortgages and mortgage-backed securities.
…
We need a firewall to break the downward spiral of house prices. Here’s how it might work. The federal government would offer any homeowner with a mortgage an opportunity to replace 20% of the mortgage with a low-interest loan from the government, subject to a maximum of $80,000. This would be available to new buyers as well as those with mortgages. The interest on that loan would reflect the government’s cost of funds and could be as low as 2%.
…
Consider a homeowner who has a mortgage equal to 90% of the value of his home. The 15% decline in the value of his house that may be needed to bring it back to its prebubble level would shift that homeowner into negative equity. Further price declines would make default attractive. But the 20% mortgage replacement loan would take the loan-to-value ratio to 72% from 90%, making it unlikely that prices would fall far enough to push him into negative equity. An interest saving that could be as large as $3,000 a year would provide a strong incentive to accept the mortgage-replacement loan, even if the individual thinks that he might temporarily have a moderate level of negative equity.

Below is a comparison of the advantages of the two plans point by point:

The negative effects of subprime foreclosures are spreading.

This entry was posted in RagBlog and tagged Bank Bailouts, Banking, Bankruptcy, Housing. Bookmark the permalink.