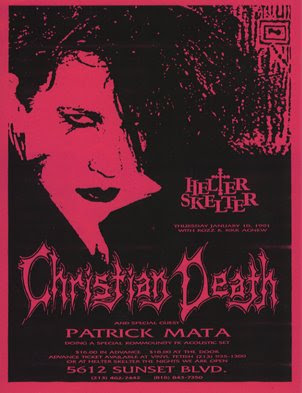 Rozz Williams on a Christian Death poster (Image: Wikipedia)
April Fool’s Day is the date of death of one Rozz Williams, born Roger Alan Painter, regarded by many as the inventor of death rock. In his most (in)famous band/incarnation, “Christian Death”, Rozz pioneered the art form that would become home to Marilyn Manson (aka Brian Warner). Both Williams and Manson continue to inspire many who believe that conformity is NOT the sincerest form of democracy. If you are interested in the roots of death rock/goth, check out “Only Theatre Of Pain“, “Catastrophe Ballet” or “Ashes” by the innovative and provocative Christian Death.

Williams, who battled manic depression and drug addiction, was greatly influenced by surrealism and dadaism. In “The Fleeing Somnambulist” – the closing track on the very influential “Catastrophe Ballet” recording – a gentle lullaby is trampled by marching jackboots. Elsewhere in the piece, Williams intones, “There was a man in a huge, white goats head sweeping through the German landscapes…”

Williams’ lyrics are infused with anti-fascist and anti-racist sentiment but perhaps the best characterization of his core message comes from the man himself. In 1994, he told an interviewer: “But as far as a message, just trying to have people keep their minds open. You know, THINK! It seems like a lot of people in the world today don’t spend much time doing that.” {1} Williams died ten years ago today — on April 1, 1998. His death was ruled a suicide.

This entry was posted in RagBlog and tagged Counterculture, Music, Popular Culture. Bookmark the permalink.