Arianna Huffington : John McCain, Paris Hilton, and the Politics of Nothing 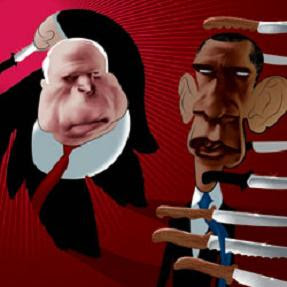 Illustration by André Carrilho / New Yorker.
‘it’s not exactly a surprise that the Republican election machine would resort to trying to make the entire election into an issueless sideshow’
By Arianna Huffington / August 6, 2008

With just ninety days left in the election it’s come down to this: our energy policy and a good deal of this presidential campaign are being discussed through the lens of Paris Hilton. What a big goof it all is! If you just ignore all the soldiers and civilians dying in the Mideast, and all the millions losing their homes and their jobs at home, you could really see the lighter side of it all.

It all started with McCain’s ad comparing Obama to Britney Spears and Paris Hilton. And then we had Paris Hilton’s “response,” followed by the McCain camp’s response to Paris Hilton: “It sounds like Paris Hilton supports John McCain’s ‘all of the above’ approach to America’s energy crisis — including both alternatives and drilling. Paris Hilton might not be as big a celebrity as Barack Obama, but she obviously has a better energy plan.”

Who ever thought this election wasn’t going to be about the issues?

Of course, it’s not exactly a surprise that the Republican election machine would resort to trying to make the entire election into an issueless sideshow. I mean, what else do they have?

But it is still a sad spectacle to see John McCain going along with it with such glib eagerness. The man who once pledged to run a “respectful campaign” and who said that Obama “would rather lose a war in order to win a political campaign” has made it clear that he’d rather lose everything he has stood for than lose the White House.

As New York Magazine’s John Heilemann noted, “we now have an inkling of just how deep in the mud McCain and his people are willing to wallow in order to win in November: right up to their Republican eyeballs.”

The problem is, we’re right down there with him. That’s because all it takes is one of the two candidates to decide to yank the discourse into the ditch and the media — and as a result, the public — follow.

Instead of the media calling the McCain campaign on its pathetic trivialization of the presidential race, they have been engaging in meaningless horse-race analysis of “did the ad work?” The conventional wisdom appears to be that it did.

There was Gloria Borger on CNN, saying, “They put out this ad, and we’re running this ad and we’re talking about it, which from their point of view, actually works for them.”

And there was Dana Milbank with Campbell Brown declaring, “They work and they always work. And we always go through this little dance when everybody says, I’m a different kind of politician, I’m post partisan, I’m a maverick. And of course when it comes right down to it, you need to drive the other guy’s numbers down. If anything, they haven’t gone negative enough just yet.”

As Huffpost’s Seth Colters Walls reports, this is nonsense, period. Indeed, to the extent that eventually the ad may “work,” it will be only because of the media saying that it worked. It’s not even horse-race analysis. It’s the Observer Effect.

Even though the media play this game every election cycle, this time, I honestly thought it would be different. That the problems we’re facing — a disastrous never-ending war, the recession, the near collapse of our banking system, etc., etc. — were just too big to ignore.

But it now appears that the bigger the problems, the more likely it is that they’ll be completely ignored. So here we are: huge problems and a correspondingly empty election. It’s the politics of nothing.

The McCain camp knows that the only way they can win this election is to turn it into a carnival sideshow.

Here’s the question the media should be asking John McCain: “do you think the frivolous, jeering tone of your campaign matches the problems being faced by this country and the sacrifices being made right now by our soldiers overseas?”

And here’s another question: what’s next for John McCain? Where does he and his campaign go from here? If this is where they have taken the political discourse in early August, what have they got for us come October? Here is a preview — our best guess — of what the McCain has in store for us:

“Too Tall.” An ad claiming that proof of Obama’s arrogance is his refusal to be as short as McCain (5′ 6″).

“Sex Tape.” An ad comparing Obama to Paris Hilton’s sex tape to make the point that, well, no point, just that Paris had a sex tape and Obama is, you know, like it.

“Rhymes with Iraq.” An ad pointing out that Obama’s first name almost rhymes with Iraq. The ad is pulled after it’s pointed out that it comes close to mentioning an issue.

“Michelle Obama: a man?” An ad that’s not making any claims, “just asking a question.” The ad succeeds in getting the typical media treatment: “As many have noted, the ad uses hyperbole. Still, however, it raises the question, is Michelle Obama a woman?”

“Barack Obama: gay?” Hard to say, but, per the last ad, if Michelle is indeed a man, then that makes Obama gay.

“akludfilkakmeitceks.” An ad with random letters coming up on the screen. The media declares it “a home run.”

1 Response to Arianna Huffington : John McCain, Paris Hilton, and the Politics of Nothing