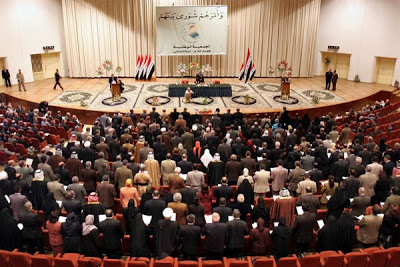 Iraq lawmakers break for vacation, unable to agree on oil-rich Kirkuk, which the Kurds want to annex to the semiautonomous Kurdish region.

BAGHDAD — The Iraqi parliament broke for summer vacation Wednesday without passing a bill that would have allowed provincial elections to be held this year, dealing a blow to hopes for bringing alienated Sunni and Shiite Muslim voices into the political process any time soon.

The parliament, which tried during a four-day special session to pass the legislation under pressure from the United States and United Nations, could not resolve differences over oil-rich Kirkuk, a volatile mixed area that the Kurds wish to annex to their semiautonomous northern region.

Iraq’s electoral commission had said the measure needed to be passed before lawmakers adjourned for the month in order to hold elections by the end of December.

Lawmakers had been set to adjourn last week when they scheduled the special session. But differences between Kurds, Arabs and Turkmens over Kirkuk ultimately could not be resolved.

Iraqi politicians, officials and Western diplomats have speculated that the political parties in government were never invested in holding a vote this year out of fear they would lose seats and influence at the provincial level. Senior politicians — including President Jalal Talabani, a Kurd, and Vice President Tariq Hashimi, a Sunni Arab — have been absent from Baghdad during the round-the-clock negotiations, citing medical reasons.

The impasse over the legislation left an uncertain situation in Kirkuk, where last week a suicide bomb and ethnic clashes killed 25 people. The delay was also likely to add to frustrations in other mixed provinces — such as Baghdad, Nineveh and Diyala — where a Sunni Arab boycott of 2005 elections created lopsided provincial councils dominated by Shiites and Kurds.

In Anbar province, Sunni tribes that joined U.S. forces in opposing Islamic extremists have wanted elections so they could try to wrest power from their Sunni rivals in the Iraqi Islamic Party.

The breakdown came amid a banner time for the Shiite-led Iraqi government, which has witnessed falling death rates; successful military campaigns in southern Iraq since the spring; and the return to the national government of Iraq’s main Sunni political bloc, which had boycotted the Cabinet for a year.

But fighting is still occurring in Iraq, and the relative calm is fragile. U.S. military commanders and Iraq experts worry that an unexpected event could set off a new cycle of violence among dueling ethnicities and sects.

The political crisis started July 22 when Arabs and Turkmens in parliament surprised the Kurds, recent kingmakers in Iraqi politics, with a call for a secret vote on the election bill’s clause dealing with Kirkuk. In a twist, even some of the Kurds’ longtime Shiite allies abandoned them, and the Kurds walked out as the measure was approved.

The country’s three-member presidency council, headed by Talabani, then vetoed the bill, citing as illegal the secret ballot in parliament.

Efforts to rescue the troubled legislation have gone into overdrive since Sunday, with the constant meetings involving political bloc leaders, the United Nations and U.S. Ambassador Ryan Crocker. At one point, President Bush phoned Massoud Barzani, president of the Kurdish region, in hopes of getting the Kurds to compromise on Kirkuk.

The parliament made a final stab Wednesday at bringing the bill to a vote after approving a $21-billion supplemental budget for the rest of the year. Instead, the parliament opted to reconvene Sept. 9 and to set up a committee to continue negotiations in the short term.

“The election law cannot be held hostage to the Kirkuk issue, so we hope very much that the Council of Representatives will continue to seek a compromise that will be adopted promptly,” U.S. Embassy spokeswoman Mirembe Nantongo said.

This entry was posted in RagBlog and tagged Electoral politics, Iraq. Bookmark the permalink.