ART : Infinity Goes Up On Trial: The Questioning of Psychedelic Art 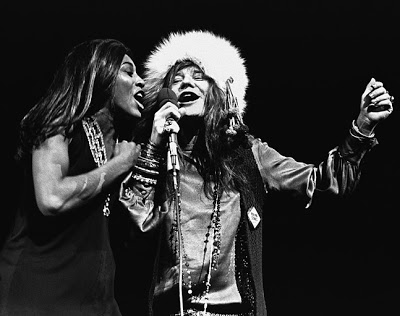 Janis Joplin and Tina Turner singing together at Madison Square Garden on November 27, 1969. Photo by ©Amalie R. Rothschild.
Summer of Love: Art of the Psychedelic Era
By Michael J. Kramer

Michael J. Kramer is a lecturer in History and American Studies at Northwestern University. This article appears in full in The Sixties A Journal of History, Politics and Culture, Vol. I, No. 1, 2008.

You need not have worn flowers in your hair to attend the Whitney Museum’s exhibition, “Summer of Love: Art of the Psychedelic Era,” but you did need to bring your wallet. The summer blockbuster seemed a blatant attempt to cash in on the 40th anniversary of the original 1967 San Francisco media event (which itself had largely been an effort to cash in on the strange psychedelic rumblings emanating from the city by the bay). Yet the exhibition turned out to offer more than just a rehashing of Sixties nostalgia, instead staging a serious reinvestigation of the definition, meaning, and continued relevance of Sixties psychedelia, as well as probing the political stances implicit in its modes of representation.

“Summer of Love” assembled a swirl of materials that itself seemed psychedelic in its mix of genres and forms: high art and kitsch, iconic imagery and esoterica, and samplings from disparate regions (San Francisco and “swinging” London, as expected, but also from the nihilistic, leather-and-heroin scene in New York City). The exhibition included collage, abstract paintings, light shows, documentary photographs, sound art, experimental film, underground newspaper graphic design, trashy novels, mystical sculptures, “mod” furniture, and wacky architectural diagrams. It veered even into abstract (Robert Rauschenberg) and pop art (Andy Warhol). This range of materials raised questions about the very definition of the psychedelic. Critics such as Holland Cotter of the New York Times criticized the exhibition for narrowing the late 1960s down to psychedelia alone, while others complained that the show lumped too much into the genre.1

The main curator, the Tate Liverpool’s Christoph Grunenberg, seems to have wanted to have his acid and eat it too. He sought to broaden the genre of the psychedelic while also maintaining that it was a transgressive, oppositional art. In the catalog that accompanied the show, Grunenberg asserted that psychedelia shared a common “spirit of euphoria and a utopian belief in a better future.” It was “adopted by those in opposition to technocratic and profit-oriented systems and in search of a more humane and authentic society.”2 But one wondered: could an artist such as Andy Warhol really be included? After all, he seemed to revel in the surface-obsessed and profit-oriented systems of postwar American mass consumer culture.

By including artists such as Warhol, “Summer of Love” asked its audience to rethink the questions driving psychedelic art rather than accept the answers we now take for granted about hippies, the counterculture, flower power, peace and love, sex, drugs, and rock ‘n’ roll, and other clichd phenomena of the late 1960s. Central to the show was the idea that the psychedelic might be understood more as a mode of inquiry than a programmatic set of conclusions; more as a widespread investigation of life than an assertion of one perspective on the way things are. In this sense, “Summer of Love” was about far more than the mythic summer of 1967 alone. Rather, it proposed that the late 1960s was a kind of extended season: a “summer” of romance, vacation, and warmth (as well as excess humidity, overheated rhetoric, and putrid rot).

The art made during these years was especially defined by the exploration of love as a guiding force and principle. But love in the late 1960s was no straightforward thing. A tumultuous time politically, socially, and culturally, the late 1960s became a vortex for many participants, sucking them into utter disorientation. From the feeling that the larger social fabric was tearing asunder to the frightening sense that the very self was cracking up, many concluded that all you need is love precisely because love seemed to be the only thing you might cling to in a time of turbulent madness.

Others, such as Warhol, held back from declaring that love could overcome all problems, but they created art that was psychedelic in the sense that it shared in the same investigation of the relationship of love to madness (Warhol explored the new kinds of quasi-religious love felt for celebrities and consumer products as well as the darker shadows of love, such as obsession or insanity itself). To quote no less an authority than Jimi Hendrix on the central question that drove psychedelic art: Is this, uh, love, baby, or is it just, uh, confusion?

Psychedelic art arose from the combination of an interest in love and a feeling of disorientation. It offered aesthetic modes for representing the crises of the late 1960s. It is worth recalling the origins of the term “psychedelic”. Coined by the psychiatrist Humphry Osmond in 1957 in response to the mystical ideas of Aldous Huxley, the psychedelic revolved around the notion that one had to destabilize set patterns of perception in order to reach a deeper truth about reality. Confusion and clarity, doubt and euphoria: they were fundamentally linked.

What better way, then, to address psychedelic art than by undermining the conventional, now clichd assumptions about the genre? This is the proposition that made “Summer of Love” more than a nostalgia trip. In place of a static definition of the psychedelic, a number of countervailing tendencies emerged in the show’s explorations of love and confusion in the late 1960s: (1) the effort to destabilize conventional conceptions of the self; (2) the urge to constitute and document community; (3) the search for the civic capacities in commercialized forms of social interaction; and (4) an interest in rethinking historical logic.

Self and community in particular appeared in continuous tension. In much of the art, the self was under attack. The experimental film of the era often explored the deconditioning of the self through radical and deeply personalized manipulations of cinematic technique. One of the most powerful segments of the exhibition was the screening of rarely seen films, such as Jerry Abrams’ Be-In (1967) and Eyetoon (1968), Ben Van Meter’s S.F. Trips Festival: An Opening (1968), and works by Kenneth Anger, Stan VanDerBeek, Jud Yalkut, and Peter Whitehead. Often trained as painters, these filmmakers used collage, speed-up, slow-down, and cut-up to transform individuals into component parts, to blur individuals with others and with their larger environs, and to suggest that the self was not fixed but rather in perpetual flux – indeed radically unstable. Most audaciously, these films continually seemed to assert that the conventional self was worth abandoning or even destroying by, in the parlance of the time, blowing one’s mind.

Indeed, there was little of the “peace and love” usually associated in this cinematic onslaught of light and form, but rather a kind of aggressive (almost violent) interrogation of the self. Yayoi Kusama’s stunning 1967 film is perhaps the best example of psychedelic filmmaking from the 1960s. The work, featured on a video monitor, chronicled Kusama’s manic obsession with noticing, painting, or pasting polka dots everywhere: on herself, a horse, a pond, the Empire State Building, crowds of commuters, a corncob, and, eventually, on the randy participants at one of her famous “naked happenings” in New York City. In her film, this all takes place to the psychedelic sounds of a rock band called the C.I.A. Change. Mania shades into paranoia, and by the film’s end, hallucination tilts into delusion, leaving us closer to madness and disintegration than magic and transcendence (or are they, to Kusama, one and the same?). All this confirms Nick Bromell’s observation that in the Sixties culture of rock and psychedelic drugs there was an ominous connection between breakthrough and breakdown.3 Despite its euphoric culminating scene of participants at a “naked happening,” Kusama’s film was titled Self-Obliteration (and Kusama now lives, by choice, in a psychiatric hospital, where she still produces polka-dot art).

Unlike the efforts to destabilize the self in the experimental films, the photographs in “Summer of Love” often revealed an urge to represent new kinds of collectivity, to document the new society coming into being in the late 1960s. These photographs were, on the whole, surprisingly unpsychedelic at first glance. One of the most underappreciated chroniclers of the era, the photographer Amalie R. Rothschild, was virtually the Lewis Hine of rock ‘n’ roll. She simply sought to document the world of music at Bill Graham’s famous Fillmore East Ballroom, particularly the community of workers who put on the shows. Her photographs include iconic snapshots of performers, especially Janis Joplin, but also the staff behind the scenes: the light show makers and roadies, the ticket takers and band managers, and the towering mountains of equipment and machines they used.

Similarly, Elliott Landy’s photographs of the Woodstock Music Festival and Gene Anthony’s of San Francisco were not aggressive probings of the self, but instead gentle portraits of community gatherings. Even photographs that utilized collage, such as Robert Whitaker and Martin Sharp’s Plant a Flower Child (1967), revealed a new kind of self blossoming within a vision of organic community.

However, other photographs seemed to question the kind of world that was being made through rock and drugs. Just as in experimental films, photographs captured the loss of stable identity even when new visions of community came into being. Rothschild’s photograph The Crowd at Woodstock (1969) began as documentary, but the more one observed it, the more it started to resemble the radical abstractions of experimental film. In the wide-angle shot, there were so many people that Rothschild’s camera could not take in all the details. The people appeared as innumerable dots; the vastness was overwhelming, even frightening. Rothschild seemed to be asking: could the individual flourish in this kind of environment? Could community?

Psychedelic art in “Summer of Love” not only questioned the nature of self and community, but also the relationship between the counterculture and mass culture. While the popular assumption has been that capitalist companies often stole from the counterculture, “Summer of Love” offered the opposite notion. In an essay from the catalog, Jonathan Harris contended that “new forms of social and political radicalism in the later 1960s were parasitic to a significant extent upon the growth in new forms of consumption and relative affluence.” In other words, Madison Avenue did not steal from psychedelic art, but, rather, psychedelic art often embraced and explored the possibilities of post-World War II capitalism and its mass consumer culture. The clothing designer Betsey Johnson, for example, recalled using scraps and random bits of the fashion industry to investigate “the everyday mix linked to the oddball possibilities of mass production.”4

This “mix” points to a crucial dynamic in the Sixties: new technologies and commercial forms increasingly saturated the day-in, day-out life of civic interaction on the streets and through the mass media. The “Summer of Love” suggested that it was precisely in this interplay between “the everyday mix” and “the oddball possibilities of mass production” that so much psychedelic art was created. Even money itself arose as a topic for exploration in this dynamic of everyday life and mass consumerism. A fascinating bit of “parasitic” appropriation in the “Summer of Love” exhibition was the mock currency created by the San Francisco collective, the Diggers. These bills were worth “No Value.” They were called “Last Stage Money” and proclaimed a “Psychedelic Burlesque” in which “only love is legal, tender, and private.” On the back, the bills declared “In LBJ We Trust None.”

Read all of this article here. / informaworld

This entry was posted in RagBlog and tagged Art, History, Psychedelia, Sixties, Summer of Love. Bookmark the permalink.