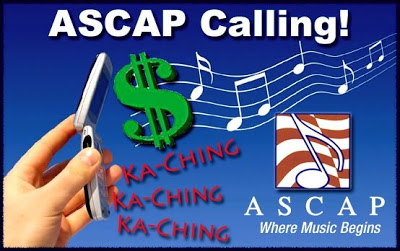 Graphic by Larry Ray / The Rag Blog.
ASCAP wants to be paid when your phone rings

…these are the same folks who crisscrossed America threatening and intimidating small business owners for having a radio playing in their small shop, diner or bar, demanding they pay an annual fee.

When I first read about being forced to pay every time your cell phone’s ringtone plays I thought it was a prank or hoax email. It wasn’t. If you don’t know what ASCAP is then turn off your cell phone and read this.

The American Society of Composers, Authors, and Publishers was born in 1913 following passage of the Copyright Law of 1909. The law was enacted, the old tale goes, after songwriter Stephen Foster died penniless while sheet music publishers became wealthy selling his music. ASCAP set up a royalty rate structure and under New York law became an unincorporated membership association. Licensing contracts with composer and publisher members give ASCAP the power to “collect and distribute money and police infringements.”

By the 1990’s ASCAP had membership of some 30,000 writers and around 14,000 music publishers who retained their individual copyrights. ASCAP’s contracted powers grew exponentially as hand cranked Victrolas gave way to movies with sound, radio, TV and an explosion of elevator music, video, jukeboxes, tape decks right up to today’s iPods, the internet and and downloadable music.

BMI is also part of the alphabet soup. Broadcast Music Incorporated collects fees from radio and TV stations for the music they play and was formed in the 1940’s when broadcasters began to feel ASCAP was more and more engaging in monopolistic practices, price fixing, and other unsavory practices.

So, with that bit of background, let’s look at just one of the inevitable excesses ASCAP has indulged in based upon it’s interpretation of licensing practices that are, “the only practical way to give effect to the right of public performance which the Copyright Law intends creators to have.”

It is a tough call as to whether it was music industry greed or just plain stupidity that led ASCAP to actually go after Girl Scouts singing songs around a campfire. In 1996, ASCAP, ever seeking more licensing and musical moolah, cast a wide net covering hotels, restaurants, funeral homes, even resorts demanding payment for the right to “perform” licensed or recorded music.

Under copyright law, “where a substantial number of persons outside a normal circle of a family and its social acquaintances are gathered,” that qualifies as a public performance. Summer camp is sort of like a resort, they reasoned, so the suits around the table opened negotiations with the American Camping Association asking $1,200 annually each from the 288 camps in the association. They finally settled for a nag of $257 per camp. But when the public learned that the Girl Scouts were among the camps being dunned and would have to pony up their Girl Scout Cookie money to sing around a campfire, ASCAP took a PR beating and called off the whole camping caper.

Now, just a couple of weeks ago, ASCAP decided every time that snip of music you bought for a ringtone blares forth on your cell phone that constitutes a performance, violating copyright law meaning you must pay up! ASCAP is in a big legal skunk peeing contest with major mobile cell phone carriers like AT&T and Verizon.

Customers who have legally bought ringtones have already boosted the music industry’s bottom line by millions of dollars. But now ASCAP’s lawyers are dialing for more dollars. Existing law from the much earlier Sony Betamax ruling says companies are not liable for how their technology is used. It would seem like ASCAP doesn’t have a case at all.

But these are the same folks who crisscrossed America threatening and intimidating small business owners for having a radio playing in their small shop, diner or bar, demanding they pay an annual fee. Those found playing a radio or recorded music were hounded month after month not unlike mafia shakedown goons seeking protection money. ASCAP agents didn’t burn down the businesses who refused to pay for playing a radio but hounded them mercilessly.

I doubt many of us are keeping up with briefs filed in court by ASCAP, but THIS ONE in their battle with AT&T pretty well shows where this may all be headed, and the outcome of their insatiable greed may just be coming to a cell phone near you.

Imagine! You, an ASCAP performer!