Assurances Economists Gave Made No Sense 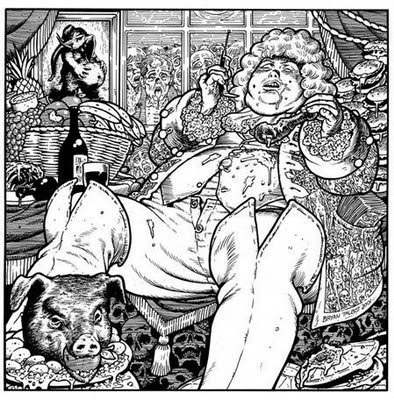 The collapse of world socialism, the rise of the high speed Internet, a bought-and-paid-for US government, and a million dollar cap on executive pay that is not performance related are permitting greedy and disloyal corporate executives, Wall Street, and large retailers to dismantle the ladders of upward mobility that made America an “opportunity society.” In the 21st century the US economy has been able to create net new jobs only in nontradable domestic services, such as waitresses, bartenders, government workers, hospital orderlies, and retail clerks. (Nontradable services are “hands on” services that cannot be sold as exports, such as haircuts, waiting a table, fixing a drink.)

Corporations can boost their bottom lines, shareholder returns, and executive performance bonuses by arbitraging labor across national boundaries. High value- added jobs in manufacturing and in tradable services can be relocated from developed countries to developing countries where wages and salaries are much lower. In the United States, the high value-added jobs that remain are increasingly filled by lower paid foreigners brought in on work visas.

When manufacturing jobs began leaving the US, no-think economists gave their assurances that this was a good thing. Grimy jobs that required little education would be replaced with new high tech service jobs requiring university degrees. The American work force would be elevated. The US would do the innovating, design, engineering, financing and marketing, and poor countries such as China would manufacture the goods that Americans invented. High-tech services were touted as the new source of value-added that would keep the American economy preeminent in the world.

According to Eric Noble, president of The Car Lab, an automotive consultancy, “Advanced studios want to be where the new frontier is. So in China, studios are popping up like rabbits.”

The idea is nonsensical that the US can remain the font of research, innovation, design, and engineering while the country ceases to make things. Research and product development invariably follow manufacturing. Now even business schools that were cheerleaders for offshoring of US jobs are beginning to wise up. In a recent report, “Next Generation Offshoring: The Globalization of Innovation,” Duke University’s Fuqua School of Business finds that product development is moving to China to support the manufacturing operations that have located there.

The study, reported in Manufacturing & Technology News, acknowledges that “labor arbitrage strategies continue to be key drivers of offshoring,” a conclusion that I reached a number of years ago. Moreover, the study concludes, jobs offshoring is no longer mainly associated with locating IT services and call centers in low wage countries. Jobs offshoring has reached maturity, “and now the growth is centered around product and process innovation.”

According to the Fuqua School of Business report, in just one year, from 2005 to 2006, offshoring of product development jobs increased from an already significant base by 40 to 50 percent. Over the next one and one-half to three years, “growth in offshoring of product development projects is forecast to increase by 65 percent for R&D and by more than 80 percent for engineering services and product design-projects.”

More than half of US companies are now engaged in jobs offshoring, and the practice is no longer confined to large corporations. Small companies have discovered that “offshoring of innovation projects can significantly leverage limited investment dollars.”

It turns out that product development, which was to be America’s replacement for manufacturing jobs, is the second largest business function that is offshored.

According to the report, the offshoring of finance, accounting, and human resource jobs is increasing at a 35 percent annual rate. The study observes that “the high growth rates for the offshoring of core functions of value creation is a remarkable development.”

In brief, the United States is losing its economy. However, a business school cannot go so far as to admit that, because its financing is dependent on outside sources that engage in offshoring. Instead, the study claims, absurdly, that the massive movement of jobs abroad that the study reports are causing no job loss in the US: “Contrary to various claims, fears about loss of high-skill jobs in engineering and science are unfounded.” The study then contradicts this claim by reporting that as more scientists and engineers are hired abroad, “fewer jobs are being eliminated onshore.” Since 2005, the study reports, there has been a 48 percent drop in the onshore jobs losses caused by offshore projects.

Academia’s lack of independent financing means that its researchers can only tell the facts by denying them.

The study adds more cover for corporate America’s rear end by repeating the false assertion that US firms are moving jobs offshore because of a shortage of scientists and engineers in America. A correct statement would be that the offshoring of science, engineering and professional service jobs is causing fewer American students to pursue these occupations, which formerly comprised broad ladders of upward mobility. The Bureau of Labor Statistics’ nonfarm payroll jobs statistics show no sign of job growth in these careers. The best that can be surmised is that there are replacement jobs as people retire.

The offshoring of the US economy is destroying the dollar’s role as reserve currency, a role that is the source of American power and influence. The US trade deficit resulting from offshored US goods and services is too massive to be sustainable. Already the once all-mighty dollar has lost enormous purchasing power against oil, gold, and other currencies. In the 21st century, the American people have been placed on a path that can only end in a substantial reduction in US living standards for every American except the corporate elite, who earn tens of millions of dollars in bonuses by excluding Americans from the production of the goods and services that they consume.

What can be done? The US economy has been seriously undermined by offshoring. The damage might not be reparable. Possibly, the American market and living standards could be rescued by tariffs that offset the lower labor and compliance costs abroad.

Another alternative, suggested by Ralph Gomory, would be to tax US corporations on the basis of the percentage of their value added that occurs in the US. The greater the value added to a company’s product in America, the lower the tax rate on the profits.

The current recession with its layoffs will mask the continuing deterioration in employment and career outlooks for American university graduates. The highly skilled US work force is being gradually transformed into the domestic service workforce characteristic of third world economies.

This entry was posted in RagBlog and tagged Monopoly Capitalism. Bookmark the permalink.