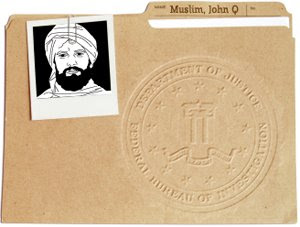 It’s unconstitutional, un-American — and it might hurt, rather than help, the FBI’s effort to stop real acts of terror.

The U.S. Justice Department is considering a change in the grounds on which the FBI can investigate citizens and legal residents of the United States. Till now, DOJ guidelines have required the FBI to have some evidence of wrongdoing before it opens an investigation. The impending new rules, which would be implemented later this summer, allow bureau agents to establish a terrorist profile or pattern of behavior and attributes and, on the basis of that profile, start investigating an individual or group. Agents would be permitted to ask “open-ended questions” concerning the activities of Muslim Americans and Arab-Americans. A person’s travel and occupation, as well as race or ethnicity, could be grounds for opening a national security investigation.

The rumored changes have provoked protests from Muslim American and Arab-American groups. The Council on American Islamic Relations, among the more effective lobbies for Muslim Americans’ civil liberties, immediately denounced the plan, as did James Zogby, the president of the Arab-American Institute. Said Zogby, “There are millions of Americans who, under the reported new parameters, could become subject to arbitrary and subjective ethnic and religious profiling.” Zogby, who noted that the Bush administration’s history with profiling is not reassuring, warned that all Americans would suffer from a weakening of civil liberties.

In fact, Zogby’s statement only begins to touch on the many problems with these proposed rules. The new guidelines would lead to many bogus prosecutions, but they would also prove counterproductive in the effort to disrupt real terror plots. And then there’s Attorney General Michael Mukasey’s rationale for revising the rules in the first place. “It’s necessary,” he explained in a June news conference, “to put in place regulations that will allow the FBI to transform itself as it is transforming itself into an intelligence-gathering organization.” When did Congress, or we as a nation, have a debate about whether we want to authorize the establishment of a domestic intelligence agency? Indeed, late last month Congress signaled its discomfort with the concept by denying the FBI’s $11 million funding request for its data-mining center.

Establishing a profile that would aid in identifying suspects is not in and of itself illegal, though the practice generally makes civil libertarians nervous. When looking for drug couriers, Drug Enforcement Agency agents were permitted by the Supreme Court in United States v. Sokolow (1989) to use indicators such as the use of an alias, nervous or evasive behavior, cash payments for tickets, brief trips to major drug-trafficking cities, type of clothing, and the lack of checked luggage. This technique, however, specifically excluded the use of skin color or other racial features in building the profile.

In contrast, using race and ethnicity as the — or even a — primary factor in deciding whom to stop and search, despite being widespread among police forces, is illegal. Just this spring, the Maryland State Police settled out of court with the ACLU and an African-American man after having been sued for the practice of stopping black and Latino men and searching them for drugs. New Jersey police also got into trouble over stopping people on the grounds of race.

The New Jersey Supreme Court ruled last year in State v. Calvin Lee that a defendant’s plausible allegation that the arrest was initiated primarily because of race would be grounds for discovery: The defense attorney could then request relevant documents from the prosecution that might show discriminatory attitudes and actions on the part of the police. Because racial profiling is most often felt by juries to be inappropriate, its use could backfire on the FBI. Suspects charged on the basis of an investigation primarily triggered by their race could end up being acquitted as victims of government discrimination.

If the aim is to identify al-Qaida operatives or close sympathizers in the United States, racial profiling is counterproductive. Such tiny, cultlike terror organizations are multinational. Richard Reid, the shoe bomber, is a Briton whose father hailed from Jamaica, and no racial profile of him would have predicted his al-Qaida ties. Adam Gadahn, an al-Qaida spokesman, is from a mixed Jewish and Christian heritage and hails from suburban Orange County, Calif. When I broached the topic of FBI profiling to some Muslim American friends on Facebook, a scientist in San Francisco replied, “Profiling Muslims or Arabs will just make al-Qaida look outside Islam for its bombers. There are many other disgruntled groups aside from those that worship Allah.”

It is a mystery why the Department of Justice has not learned the lesson that terrorists are best tracked down through good police work brought to bear on specific illegal acts, rather than by vast fishing expeditions. After Sept. 11, the DOJ called thousands of Muslim men in the United States for what it termed voluntary interviews. Not a single terrorist was identified in this manner, though a handful of the interviewees ended up being deported for minor visa offenses. Once it became clear that the interviews might eventuate in arbitrary actions against them, the willingness of American Muslims to cooperate declined rapidly, and so the whole operation badly backfired.

Read all of it here. / Salon

This entry was posted in RagBlog and tagged Criminal Justice, U.S. Government, War on Terror. Bookmark the permalink.