Atheism and the Army 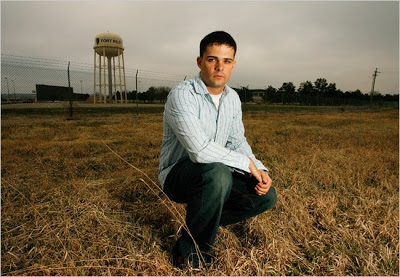 Specialist Jeremy Hall, 23, outside Fort Riley, Kan., where he has been stationed since being sent home early from Iraq because of threats from fellow soldiers. Photo by Ed Zurga / NYT
Soldier Sues Army, Saying His Atheism Led to Threats
By Neela Banerjee / April 26, 2008

FORT RILEY, Kan. — When Specialist Jeremy Hall held a meeting last July for atheists and freethinkers at Camp Speicher in Iraq, he was excited, he said, to see an officer attending.

But minutes into the talk, the officer, Maj. Freddy J. Welborn, began to berate Specialist Hall and another soldier about atheism, Specialist Hall wrote in a sworn statement. “People like you are not holding up the Constitution and are going against what the founding fathers, who were Christians, wanted for America!” Major Welborn said, according to the statement.

Major Welborn told the soldiers he might bar them from re-enlistment and bring charges against them, according to the statement.

Last month, Specialist Hall and the Military Religious Freedom Foundation, an advocacy group, filed suit in federal court in Kansas, alleging that Specialist Hall’s right to be free from state endorsement of religion under the First Amendment had been violated and that he had faced retaliation for his views. In November, he was sent home early from Iraq because of threats from fellow soldiers.

Eileen Lainez, a spokeswoman for the Defense Department, declined to comment on the case, saying, “The department does not discuss pending litigation.”

Specialist Hall’s lawsuit is the latest incident to raise questions about the military’s religion guidelines. In 2005, the Air Force issued new regulations in response to complaints from cadets at the Air Force Academy that evangelical Christian officers used their positions to proselytize. In general, the armed forces have regulations, Ms. Lainez said, that respect “the rights of others to their own religious beliefs, including the right to hold no beliefs.”

To Specialist Hall and other critics of the military, the guidelines have done little to change a culture they say tilts heavily toward evangelical Christianity. Controversies have continued to flare, largely over tactics used by evangelicals to promote their faith. Perhaps the most high-profile incident involved seven officers, including four generals, who appeared, in uniform and in violation of military regulations, in a 2006 fund-raising video for the Christian Embassy, an evangelical Bible study group.

“They don’t trust you because they think you are unreliable and might break, since you don’t have God to rely on,” Specialist Hall said of those who proselytize in the military. “The message is, ‘It’s a Christian nation, and you need to recognize that.’ ”

Soft-spoken and younger looking than his 23 years, Specialist Hall began a chapter of the Military Association of Atheists and Freethinkers at Camp Speicher, near Tikrit, to support others like him.

At the July meeting, Major Welborn told the soldiers they had disgraced those who had died for the Constitution, Specialist Hall said. When he finished, Major Welborn said, according to the statement: “I love you guys; I just want the best for you. One day you will see the truth and know what I mean.”

Major Welborn declined to comment beyond saying, “I’d love to tell my side of the story because it’s such a false story.”

But Timothy Feary, the other soldier at the meeting, said in an e-mail message: “Jeremy is telling the truth. I was there and witnessed everything.”

Read all of it here. / New York Times
Thanks to Jim Baldauf / The Rag Blog