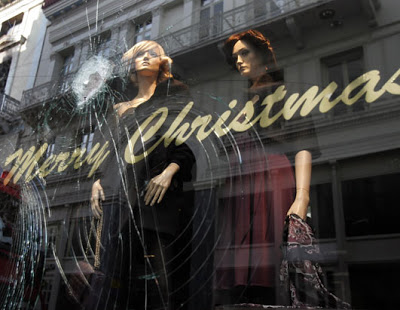 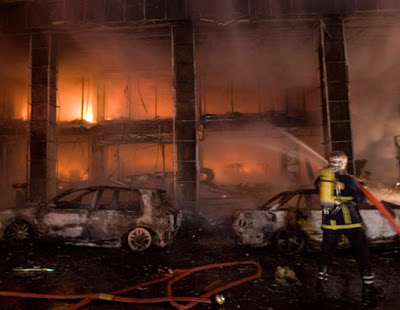 A firefighter tries to extinguish a fire in the Monastiraki area of central Athens, Greece early Sunday, Dec. 7, 2008. Photo by Petros Giannakouris / AP.
‘The shooting and its violent aftermath threatens to escalate a decades-long conflict that has simmered between police and far-left groups.’
By Nicole Itano / December 8, 2008

ATHENS – Greece’s worst rioting in years erupted late Saturday night after an Athens policeman shot and killed a teenage boy in a central neighborhood known as the base of anarchist and other antiestablishment groups.

By Sunday morning, with the riots continuing, a trail of devastation had been blazed across central Athens – with the stench of tear gas and smoke from charred vehicles and buildings hanging over parts of the ancient city. The violence quickly spread to other parts of the country, including Greece’s second-city, Thessaloniki, and the vacation islands of Crete and Corfu.

The conservative government, which was already struggling to stay in power in the wake of a recent land-exchange scandal, attempted to calm the rioters by arresting the two police officers connected with the shooting.

The fatal shooting took place in the Athens neighborhood of Exarchia, a dense warren of concrete apartment buildings home to a mix of students and anarchists. Clashes between police and radicals are common in the neighborhood.

Anarchist groups frequently set off small bombs throughout the city – on Wednesday alone a bomb damaged the offices of the French news service Agence France Presse and arsonists torched a Bosnian embassy car and a bank cash machine.

Brady Kiesling, a former US diplomat, who is writing a book about the Greek militant group November 17, says Greek police have limited power to use force against these groups because public sentiment will not tolerate it. This has resulted in a delicate balance in Exarchia, with neither pushing the other too far. Many Greeks cite the events of November 17, 1973 – a day that is still commemorated, when the army stormed the Athens Polytechnic University and killed a number of striking students – as a reason why the police must be restricted.

“The police stay out of certain areas, unless there’s a major emergency, and the anarchists don’t trash things badly unless there’s a good reason,” Mr. Kiesling says. But “once someone gets killed, the doctrine is massive retaliation.”

Details of the shooting are disputed, but police issued a statement saying the two officers had been attacked by a group of youths. One officer threw a stun grenade while the other responded with three shots. At least one bullet hit the boy, reported to be 15 or 16. According to police, he died on the way to the hospital.

The last fatal police shooting of a minor in Greece, in 1985, sparked months of nearly daily clashes between police and anarchists. The terrorist group November 17 also bombed a bus full of riot police in retaliation, Kiesling says.

Both officers involved in Saturday’s incident have been arrested. Prokopis Pavlopoulos, the country’s Interior minister, who is responsible for the police, promised punishment for those responsible.

Mr. Pavlopoulos, and his deputy minister, also offered their resignations, a move that was rejected by the prime minister.

“It is inconceivable for there not to be punishment when a person loses their life, particularly when it is a child,” Pavlopoulos said in a press conference Sunday morning. The Interior minister also condemned the actions of the rioters. “No outrage, no matter how ideologically established it is, can lead to such incidents as we witnessed last night.”

Shortly after the shooting, which took place before 10 p.m., an angry crowd – summoned by text message and the Internet – gathered in Exarchia. They clashed with police, shouting “Murderers in uniform,” and burned and looted local shops.

Later that night, the rioters moved to other areas of the city center, burning or damaging at least 31 shops and breaking windows in the tourist neighborhood of Monistiraki and along one of central Athens’ major shopping streets, Ermou. Just a few hundred yards from the ancient site of Hadrian’s Library, a charred building still smoldered late Sunday morning. Some two dozen police officers were reportedly injured in the clashes.

On Sunday afternoon, more than 2,000 people gathered near the Athens Polytechnic to march towards Athens’ central police station in protest of the killings. Greek law bars police from university buildings.

“The feeling is anger,” says John Gelis, a 28-year psychologist, shortly before joining the march. “A kid was killed just like that. It’s a sign of arrogance by the police. It’s an act against democracy.”

Mr. Gelis joined in the riots on Saturday night, saying the targets of the unrest included banks and multinational companies, not small businesses. “No one has anything against the little owners.”

But some small businesses had been ransacked, including a family-run computer store in the heart of Exarchia. Business owners and residents say they are weary of the unrest. “I’m fed up with this,” says Elina Dimitriou, a long-time resident of the neighborhood. “It needs to stop. But I don’t know who to blame.”

[Material from the Associated Press was used in this story.]

This entry was posted in RagBlog and tagged Anarchism, Greece, Riots, The Left. Bookmark the permalink.