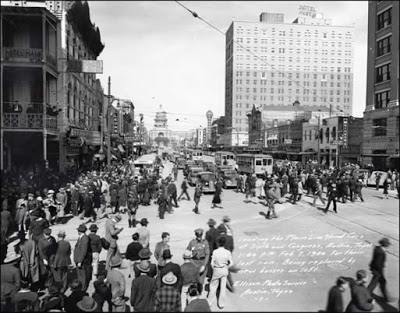 For many years Capital Metro ran a free service that was known as “the Dillos.” Quirky buses crisscrossed Austin from Pleasant Valley to Austin High School and from UT down to Oltorf. Thousands of workers and tourists used these buses. One of the busiest Dillo routes shuttled jurors to and from the courthouse.

In 2007, the Downtown Austin Alliance, a collection of real estate interests intent on building a light rail system for themselves convinced the transit authority to christen a “Dillo Task Force,” which altered the Dillo service to serve just the Downtown area east of IH35, south of the Capitol and north of the river mimicking the future rail alignment. To keep people of little means off the new system they instituted a fare for the first time. But they forgot to ride it, and the Dillos quickly died.

Emboldened and undeterred, the Downtown Alliance led by millionaire developer Tom Stacy has set it’s sights on those same people of little means. 72% of Capital Metro riders are non-choice riders who have no car option. Over 90% have incomes below Austin’s mean. In an Austin American-Statesman op-ed piece on September 24th, Stacy pleaded with the transit authority to raise bus fares sooner and at a much higher rate than the 100% increase that was arrived at last year after much wailing and gnashing of teeth. The Statesman gleefully seconded the notion in an editorial the next day.

Earlier in the budget process Capital Metro staff drew up a balanced budget without the Alliance’s quicker, steeper fare hike. The Board of Directors led by County Commissioner Margaret Gomez raised no objection and CMTA told the media and the public the fare hike would stay at the previously voted on rate and time.

On September 28th, the Board of Directors caved into pressure from the Alliance whose members own the property Capital Metro leases at a bargain rate at 323 Congress Ave. primarily to sell route schedule booklets and passes for senior and disabled riders. Their members also have sold many millions of dollars worth of real estate to Capital Metro over the years. Now Metro says the much harsher fare increase is back on the table.

The excuse Stacy and some others are using is that the stimulus money the transit authority is receiving should go 100% to hardware and specifically the Leander train. Not surprisingly, the most vocal person is Leander, TX mayor and realtor John Cowman who once called local transit workers “the help.” Leander’s 40,000 residents are the sole beneficiaries of the “Red Line,” which has cost 112 million dollars and counting.

The rules for the transit portion of the stimulus money specifically allow for 10% to be used on operations. Regardless, there is no direct tie in to fares. The budget could be balanced any number of ways and the worst way would be to be on the backs of the residents of Austin with the lowest income. The Bus Riders Union of Austin has recommended cutting numerous areas of waste including leasing of the Metro store which is estimated to consume about one million dollars a year to do little more than sell passes and schedule booklets that we used to get at HEB or at Metro’s opulent headquarters at 2910 East Fifth St. The stimulus chatter is nothing more than convenient teabagger rhetoric.

Raising fares lowers ridership. This flies in the face of Capital Metro’s professed goal of doubling ridership by 2025. Lowering ridership harms the environment by forcing people off the bus and back into cars. As Austin approaches EPA non-attainment a fare hike is the opposite of what our air needs. The first stage of the hike has cost the transit system over one million trips in the first half of the year and the second stage set for next summer will further devastate ridership. Stacy’s anti-people fare hike would be equally anti-environment, and compound an already bad situation.

When riders in San Francisco and Vancouver were pushed to the breaking point they staged fare strikes which not only denied those cities’ versions of the Downtown Alliance their blood money, it also empowered transit riders to push for other changes to the system. They asserted their ownership and now these systems are seen as models for transit that Austin says it aspires to.