Battle of the Hawks 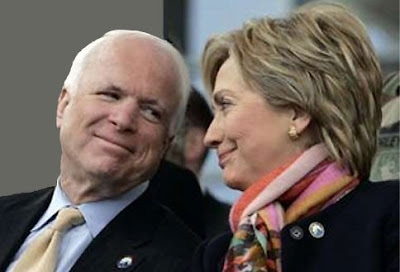 In the increasingly unlikely event of a McCain-Clinton election, folks who care about the peace issue would have serious reason to worry. Both of these candidates are inveterate hawks, and what we would be up against is a choice between the neoconservatives and the neoliberals as to who could be more adventurous in getting us into unjustifiable foreign wars.

Both not only voted to authorize President Bush’s irrational invasion of Iraq but also have failed to apply those lessons to the real challenges we face, particularly concerning Iran. On the one hand, we have Sen. John McCain’s wildly inane “bomb, bomb, bomb, bomb, bomb Iran” singing refrain, and on the other, Sen. Hillary Clinton’s commitment to “totally obliterate” Iran in response to any nuclear attack by Tehran on Israel.

Clinton has stood by her implicitly genocidal threat against the 70 million innocent Iranians, who have no effective control over their government’s policy, a threat made in response to a question raised in the heat of primary day in Pennsylvania. She later extended the threat to include retaliation on behalf of Saudi Arabia, Kuwait and other Arab countries if they were attacked by Iran.

Her statement extending the U.S. “nuclear umbrella” far beyond the threat to retaliate against a Soviet nuclear attack during the Cold War was greeted with a yawn by the media, which interpreted it as an election-day ploy to appear tough and pro-Israel. The Washington Post referred to “Clinton’s apparent effort to distinguish herself from her rival for the Democratic nomination … by offering a more hawkish approach to world affairs.” That rival, Barack Obama, has called for negotiations with Iran’s leaders and condemned Clinton’s proposal as saber rattling.

But the Washington Post story provided evidence that Hillary’s hawkishness is not merely a campaign posture, as evidenced by her two key foreign policy advisers, who the Post reports helped come up with the “obliterate Iran” idea. One of them is Martin S. Indyk, the former Clinton administration ambassador to Israel, who was as strong as any of the neoconservatives in advocating the invasion of Iraq. In an article he co-wrote with Kenneth M. Pollack for the Los Angeles Times three months before the Iraq invasion, which cited their insider status as former government officials who “had access to the most sensitive U.S. intelligence on Iraq,” the two claimed that Iraq had “thousands of tons of precursor chemicals for chemical warfare agents, thousands of liters of biological warfare agents. …” That “insider” information was false.

The Clinton campaign’s national security director, Lee Feinstein, is another leading Democratic hawk and Clinton administration alum who promoted the threat to obliterate Iran. Feinstein, like Indyk, had strongly disparaged the work of the U.N. inspectors before the invasion. And even a month after the U.S. occupation began, as U.S. troops scoured all of the suggested weapons locations, Feinstein argued, “I believe they will find weapons of mass destruction.”

The dark irony here is that the unjustifiable invasion of Iraq has elevated Iran to a position of enormous power over events in the region, beginning with its influence over the puppet government in Iraq’s Green Zone, many of whose key members, including the prime minister, spent many years in exile in Tehran, where they were trained. The ability of Iran to make life miserable for the American occupation is the main counterweight to a tougher stance on Iran’s nuclear program, and that is the direct consequence of a war for which Clinton and McCain both voted.

Clinton seems to be far more hawkish than her husband, and her increasingly bellicose remarks support that perception. If she is chosen as the Democratic Party’s standard-bearer, she can be expected to tack further in that direction, once the primaries are over and the peace vote has been counted out.

I do not think this a matter of a female candidate having to prove that she is capable of being a macho commander in chief, although there is a whiff of Margaret Thatcher here, so proud of taking her nation to unneeded war. With Clinton, as with Thatcher, quite apart from gender, there seems to be a more basic philosophical commitment to using military force before other options have been seriously explored.

That the force cited by Clinton portends the “total obliteration” of another people raises the prospect of the United States, the only nation that has ever used nuclear weapons, doing so again. It suggests that such weapons of mass destruction are not heinous inventions but rather instruments of rational policy when in the hands of the virtuous. That is a message that we dare not deliver to the world.

Robert Scheer’s new book is “The Pornography of Power: How Defense Hawks Hijacked 9/11 and Weakened America.”

This entry was posted in RagBlog and tagged Hillary, Iran, McCain, Presidential Campaign. Bookmark the permalink.