Ben Hirsch :
What is Tom Brady, and why does it matter?

The Brady-as-an-underdog tale has got to be one of the most dubious American sports myths. 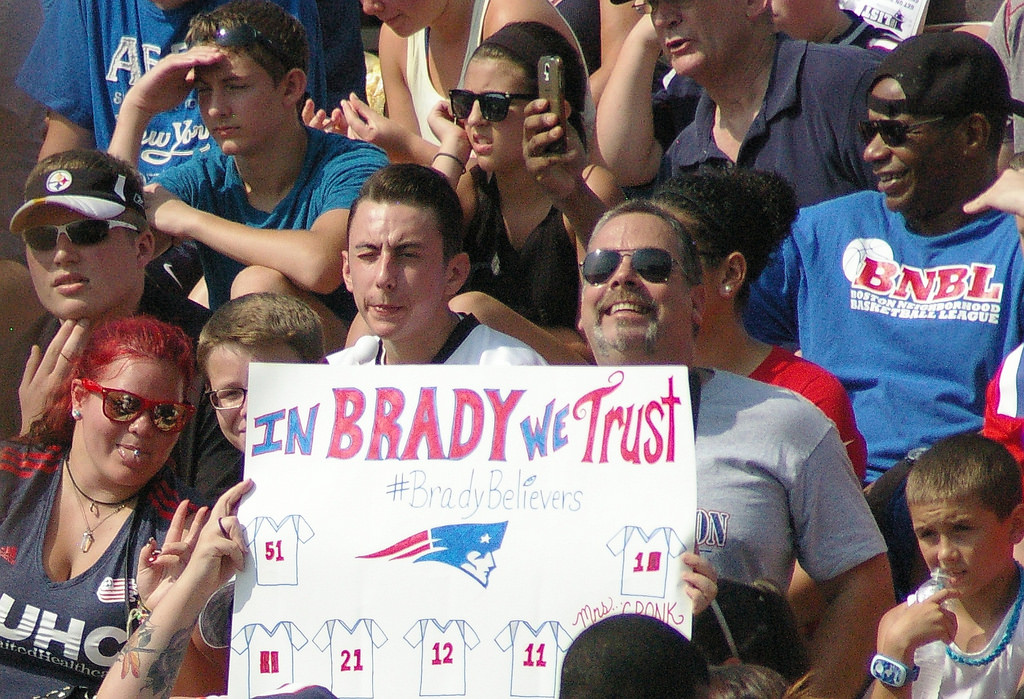 I was 11 years old and lived in Hull, Massachusetts, a suburb on the south shore of Boston, the first time Tom Brady – then a sort of floppy, child-like savant not so much immune but oblivious to pressure – led the Patriots to “world champion” status. I really cared; I jumped off of a family friend’s couch when Adam Vinatieri converted the field goal that beat the “Greatest Show on Turf” St. Louis Rams, and hugged my dad like it mattered.

Now, 16 years later, at the age of 39, Tom Brady — the ice-veined sex symbol version — won his fifth Super Bowl, and was awarded his fourth Super Bowl MVP award. He is universally considered the greatest quarterback of all time and is probably the most impressive athlete I have ever seen.

Tom Brady is a supporter of Donald Trump and his victory was cheered by white supremacists.

Much to the horror of my “liberal” home city, Tom Brady also is a supporter of Donald Trump (or at the very least has been known to don a MAGA hat) and his victory was cheered by white supremacists. Tom Brady matters because he represents a coalescence of our cultural politics. This quarterback is an embodiment of the terrifying symbolic politics of the right, and the inadequacy of the arguments and alternatives presented by the left.

Tom Brady’s origin as an underdog is now the stuff of legend, and is a prime example of how fundamentally confused we all are. Tom Brady grew up in suburban California and is the son of a CEO. He regularly attended 49ers games and learned to throw from NFL pros at expensive football camps. Despite his reputation as unseen, undervalued, and ignored, he was scouted by at least four powerful football programs (UCLA, UC Berkeley, USC, and Michigan), eventually starting for Michigan where he set records for most passes attempted and completed in a season.

After his NCAA career he was drafted with the 199th overall pick.

Aware that he might not be able to play forever — or at least advised by those who were aware — Brady also spent time during college interning at Merrill Lynch. After his NCAA career he was drafted with the (now unfathomably low) 199th overall pick. He won the Super Bowl his second full season in the league.

The Brady-as-an-underdog tale has got to be one of the most dubious American sports myths. His is the story of a person who started near the top, stayed near the top with the help of deep financial resources, and eventually became the best ever. It is not an accident that people like Brady are heralded as underdogs. Seemingly an exaggeration for extra excitement, the underdog paradigm serves to undermine our awareness of privilege, to discount the need for affirmative action, and to legitimize the erosion of the social safety net. “Look at Tom! That 6’4” guy who could jump two feet in the air and didn’t even have explosive talent. It’s all his grit and determination.”

And yet, the real challenge that the left faces is that no structural analysis can convincingly explain Tommy Touchdown. Brady is a freak of instant spatial analysis, immense physical bravery, and unrelenting effort. White supremacy may explain why Richard Spencer adores Brady and his band of white receivers (Spencer especially loves this), but it cannot explain why Brady seems to perform best when the game is on the line.

People like Serena Williams have faced down prejudice all their lives.

In fact, a compelling counternarrative can be made that people like Serena Williams, a rare parallel in terms of athletic excellence, are resistant to pressure because they have faced down prejudice all their lives. One accomplishment of the Brady-as-underdog story is that it allows the vastly different degree of obstacles faced by Williams and Brady — in particular and as stand-ins — into one equal valid experience of “adversity.” I would argue that most ardent Patriots fans know that Brady is not really an underdog, especially not now. But academic leftists can not explain Brady, and the cultural left provides little alternative to the spectacle of individual excellence.

Beyond the obfuscation achieved by underdog Tom, he should terrify because he is the synchronization of consumptive liberalism and political conservatism, and demonstrates the dangerous flexibility of the alt-right. Brady is married to a Brazilian immigrant, eats avocado ice-cream, and avoids white flour and sugar. He receives regular acupuncture treatment, does yoga, and meditates. He abstains from lifting weights and emphasizes flexibility. The perfectly-manicured quarterback famously wears Ugg boots and calls male and female friends alike “Babe.”

Tom Brady, masculine hero, is a ‘snowflake’ if there ever was one.

Tom Brady, masculine hero, is a “snowflake” if there ever was one. According to the Washington Post and Sports Illustrated, Brady cites the change in diet and shift towards spiritually-inflected physical training to “Eastern teachings” and credits them for his longevity and sustained excellence. Despite this, Brady provides at least silent support to politicians who belittle the laborers who grow his avocados and demean the culture from which they originate, who enact racially-motivated immigration bans, and propose to erode the social programs that provide the floor of opportunity from which so many of his teammates rose from to support him in his effort to be the greatest.

The new American right is completely comfortable with this dissonance. They have politicians who go on CNN and ask, “what have non-European cultures really contributed to human progress?” while their hero lays on an acupuncture table and eats quinoa salad. If Steve Bannon is Death itself (as he was Super Bowl weekend on SNL), Brady is his golden retriever.

In all likelihood Brady worries little about what should create paralyzing cognitive dissonance in his highly-focused mind. As David Foster Wallace (look at me, liberal elitist if there ever was one) points out, the thing about sports heroes is that for them platitudes are real. For Jordan the game seven buzzer-beater really was just one of thousands of shots. For LeBron it really was a team effort. Down 28-3 Brady really felt, “a little disappointed in how we played, but knew [he] could come back out and win the game.”

Brady probably does not worry about what his black teammates think of his politics.

Brady probably does not worry about what the black teammates essential to the initiation of his legacy think of his politics. To him probably each Pats edition really has been a unified team once they get on the field. But his reliance on players — including my childhood favorites Richard Seymour, Willie McGinest, Ty Law, Troy Brown, and Deion Branch — and simultaneous support for and endorsement by a white supremacist is deeply troubling because it shows the inability of the left to articulate what exactly Trump and his orcs represent.

Tom Brady should be ashamed and embarrassed by his tacit support of Trump. He should wake up to his reliance on people of color, and his need for cultural practices that some of his fan-boys would prefer to see cleansed from our national space.

Unlike many of my friends on the left, I think sports matter. After a few beers I’m even tempted to argue that sports offer a rare moment of interclass excitement and fosters the place-based unity that so many communitarian-strand progressives ache for. But sports also matter in that they provide a platform through which embedded power can be legitimated and naturalized, and through which truly evil ideas can be sanitized.

Maybe we should engage with Trump supporters through the signifier that is Tom Brady and try to show the incoherence of his beliefs. Or maybe if we are going to blast sports as a “capitalist patriarchal opiate,” we must at least try and generate the type of communal experience that something like the Super Bowl provides. At the very least we should admit that Tom Brady matters.  And we should worry, because he is terrifying.

[Ben Hirsch is a graduate student at The University of Texas LBJ school of Public Affairs. He is a former academic interventionist at a public high school in Austin and is also an environmental justice activist/organizer. In his spare time Ben thinks about the cultural politics of music, art, and sports.]

3 Responses to Ben Hirsch :
What is Tom Brady, and why does it matter?