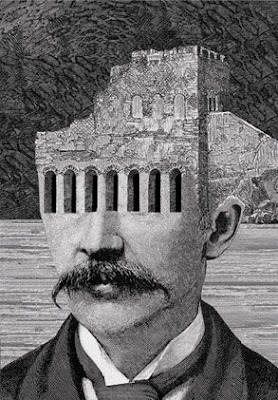 Ben Stein has a message for Darwin: “Fuck you!”

It seems incomprehensible that Stein — former Nixon speech writer, game show host, eye drop pitchman and Neil Cavuto love interest — could find a way to further cement his reputation as the smartest dumb person alive, but, bless his heart, he’s done it. Today sees the theatrical release of a full-length documentary presented and narrated by Stein: Expelled: No Intelligence Allowed casts the man with the velvet monotone as a sort of Michael Mooresque troublemaker — a mischievous imp out to rankle the establishment and challenge the suffocating status quo, all in the name of getting to the truth that they don’t want you to know about.

And against which authority figure is Stein playing the role of the uppity insurgent?

Feel free to stop reading if you’ve heard this one before, but Expelled assumes the position not only that the theory of evolution and the faith-based hypothesis known as “intelligent design” are on close-to-equal scientific footing, but that there’s an Illuminatian cabal among the science community, no doubt sitting in a Star Chamber somewhere, seeing to it that any developmental view but Darwin’s is suppressed at all costs. It’s a hell of a parlor trick really, and one the religious right has become admirably adept at exploiting these days: to turn the tables on their adversaries by adopting the tactics and lexicon traditionally associated with the mutinous left, casting themselves as the victimized and oppressed — the little guys, taking up the fight against (literally, as opposed to an omnipotent deity) “The Man.”

In the end though, that’s all it is — a really clever trick, and one that’s played to the hilt in Expelled.

Creating controversy where there is none is positively pedestrian by now, but taking it to the lengths that this new documentary does, and doing it with such a salient level of panache, borders on genius. The SNL writing staff, circa 1977, couldn’t have created a more audaciously comical premise than Ben Stein — a man so square he craps cubes — writing “I Will Not Question Authority” on a blackboard while dressed like Angus Young. Stein is a Dangerous Mind only if you see market-to-market accounting as a ballsy show of defiance, which makes him the perfect impertinent hero for the God-said-it-I-believe-it set.

Unfortunately, no matter how creative the packaging, the lesson being sold in Expelled remains little more than nonsense. Stein and company can wrap themselves in the American flag and the freedom to question that it provides; they can grab a handful of ostensible pop culture street cred by aligning themselves with the likes of Bono; in the end, it doesn’t make so-called intelligent design any more logically sound. It’s still a religious assertion, and not a scientific one. It doesn’t stand up to even the most rudimentary evidential scrutiny, and while it’s always important to ask questions and allow for healthy debate, no matter the topic, at some point a line has to be drawn separating fact from fiction — or distraction. The truth is important because it’s the yardstick by which we measure our reality, and Ben Stein — or anyone else — trying to pass off spectacular whimsy as legitimate fact is, yes, damaging. Not everything can be up for discussion, no matter how large a segment of the population might believe otherwise.

And that’s the best part of all this: Stein and his supposedly rag-tag little group of freedom fighters are neither rag-tag nor little.

In fact, the idea that we’re expected to believe that the religious in this country are few and persecuted is laughable, bordering on offensive.

Last Sunday evening, CNN aired something it called the “Compassion Forum.” It was a live event, broadcast from Messiah College in Pennsylvania, in which an entire roomful of religious leaders — mostly Christian — were granted an audience with the two Democratic candidates for president, one of whom may eventually be the next leader of the free world. For two hours, Hillary Clinton and Barack Obama talked not about war, education and the economy, but about how their faith guides them and, to some extent, who loves Jesus more. The fact that either candidate believes that he or she has the luxury right now to spout metaphysical platitudes is nothing short of staggering — though certainly not surprising. Just a few days prior to the “Compassion Forum,” the entire cast of American Idol, dressed in evangelical white, belted its way through Shout to the Lord not once, but twice on national television. And today, the city in which I live, New York, is at a standstill as thousands crowd the streets — streets which have been shut down by police — to reverently welcome an unremarkable man in ridiculous robes and a funny hat who believes that he has a hotline to the creator of the universe and who just wrapped up a meeting with the President of the United States.

In other words, don’t even attempt to claim that the religious suffer for their beliefs in this country. Hell, as long as you insist that you’re doing it in the name of God, you can swap wives and molest children in The Middle of Nowhere, Texas for years before somebody finally comes and hauls your lunatic ass off to jail.

Ben Stein can rage against the scientific machine all he wants. He can shake his fist and shout, “Don’t try to keep me down with your, your gravity, man!” It won’t make a spurious assertion — that intelligent design deserves a seat at the lab station — any more sound, nor will it make Stein anything more than a rebel without a clue.

Backlash to Ben Stein’s Expelled Revs Up With Sexpelled
By Jenna Wortham / April 18, 2008

The manifesto for the video states: “Sexpelled tells of how Sex Theory has thrived unchallenged in the ivory towers of academia, as the explanation for how new babies are created. Proponents of Stork Theory claim that ‘Big Sex’ has been suppressing their claim that babies are delivered by storks.”

The video (right) combines footage from the film and mock interviews with scientists, all set to the bluesy guitar riff from ’80s rock song, “Bad to the Bone.”

The conclusion of the clip plasters the words “Ben Stein is an ignorant fool” across the screen.