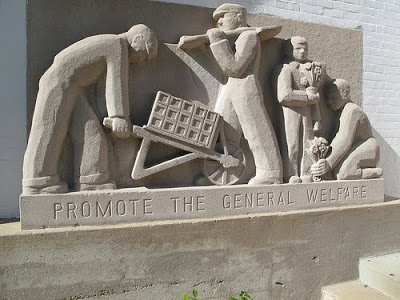 Frieze by New Deal sculptor Lenore Thomas at Center School in Greenbelt, Maryland.Photo by Anomalous_A’s / Flickr.
Americans in Berlin:
How do we ‘promote the general welfare’?

Now I’d like to offer a little background and two comments, a personal and a philosophical one.

American Voices Abroad (AVA)-Berlin occasionally convenes “ Café Americain,” a political salon. Recently we read and discussed the U.S. Constitution, line by line. A core stated purpose in founding the United States of America was “to promote the general welfare.”

Question: How and by whom does that get defined? It can be a difficult process, and has changed over time. Originally, at the time the constitution was written, Indians, slaves, and women had no vote in defining that.

Since then the constitution has been improved some.

When I was a kid in the 1950’s “the general welfare” seemed to be defined simply as, “What is good for GM is good for the USA” — in a corporate led economic boom, with “everything getting better for everybody.”

But that boom has been over for a long time now.

GM drove over a cliff. And recently in a spectacular way, with “innovative investment grade products,” the capital market made what were not — shall we say — efficient investment decisions, misallocating vast sums.

The issue of “the general welfare,” of how and by whom that gets defined, has become dramatic indeed. The effort to reform health care in the U.S. certainly provides insight into that process. The process has been messy, and some have compared it to making sausage.

(I will note that I once helped make sausage, literally. One of my best friends when I was a kid invited me to his home when the family pig was turned into sausage. The family knew how to do that well. I found it rather grisly, but do not, just now, want to philosophize about the pros and cons of eating meat or being a vegetarian.)

Now, living in Germany and looking at the health care efforts here and in the USA, I will make a philosophical point. While there are intense issues here, there is a general cultural agreement that promoting a good health care system is an important part of promoting the general welfare — that there are “common goods” that are worth maintaining and improving upon. And there are processes here to work on that.

A technical term in philosophy is “ontology” — which humorously put, is the study of what “is” is. What “is” reality? What kinds of “reality” “are” there? What entities exist or can be said to exist. Moving further, are there “common goods,” or “the general welfare,” and by whom and how are decisions made about “common goods” and “the general welfare”?

What do you think?

I will raise this issue again in a different context by early May when in Berlin there will be a celebration at the historical inner city Tempelhoff airport. Air traffic has been moved to another airport on the edge of town, and the Tempelhoff airfield will be opened to public use. There are some similarities between Tempelhoff airport in Berlin and the Mueller Airport area in Austin, Texas.

Historically, the Tempelhoff airfield has defined a large part of Berlin, especially during the “Berlin Airlift.” Now the closing of that field for air traffic has opened it for flights of fantasy about future use.

I will try to report on future developments concerning those efforts.

In the meantime, below is a letter that members of AVA-Berlin wrote about supporting the health care fight in the U.S.

[Editor’s note: as we publish this, Congress appears to be in the process of passing President Obama’s compromise health care bill.]

Americans in Berlin. Our man David MacBryde, in the hat, is fifth from the right Photo by Karen Axelrad.

The health care reform bill is still alive and headed for a vote within the next week or so. Although not as far-reaching as many of us had hoped, the bill has real merit. It is expected to cover 34 million uninsured, to eliminate pre-existing condition clauses, close the gap in the Medicare drug program, and eventually control the spiraling costs of health care spending. It will also provide a basis for future changes and improvements.

Passing a health care bill will also affirm and strengthen the Obama administration against a powerful right wing backlash. If health care doesn’t pass, the administration is unlikely to be able to be effective in other critical areas such as environmental protection, energy policy and foreign relations, to name but a few.

Many Democrats are moving into the Yes column for this bill, but unfortunately many are afraid that a vote for a health care bill will damage their re-election chances. In the next few days, their offices will be virtually under siege from those who listen to Beck, Hannity, etc. If you would like to counter this onslaught with a powerful positive message to your Senators and Representatives — emphasizing that health care reform is so important to you that you are calling from Germany — links to phone numbers are provided below.

If you have a flat rate for calls to the U.S., great! If not, use one of the special prefixes to make an inexpensive call to the U.S. And remember, this e-mail can be passed along to family and friends, to remind everyone who cares about the state of health care in the U.S. to stand up for it now.

You can check here for up-to-the-minute rates. And again, we urge you to call your people in Congress even if they have a good voting record.

[David MacBryde worked for The Rag, Austin’s Sixties underground newspaper. He sends us the occasional dispatch from Berlin where he now lives.]