Bernardine Dohrn and Bill Ayers : Looking Back at Kent State and Jackson State 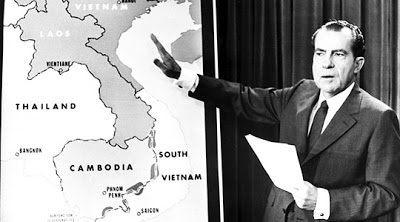 Richard Nixon and the political class had denounced students as thugs and subversives for their resistance to the pervasive U.S. war crimes.

Again and again we learn that war and empire abroad will find a way home.

On April 30, 1970, Richard Nixon announced the U.S. invasion of Cambodia, a sovereign nation the U.S. had been secretly bombing for several months. It was a saturation campaign involving 120 strikes a day by B-52s carrying up to 60,000 pounds of bombs each.

But in the common doublespeak of war, the president claimed: “This is not an invasion of Cambodia… once enemy forces are driven out of these sanctuaries and once their military supplies are destroyed, we will withdraw…”

Nixon’s aggression against Cambodia was accompanied by a verbal assault on those inside the U.S. opposing the war: “we live in an age of anarchy, both abroad and at home,” he intoned.

The next day, Nixon went to the Pentagon to clarify the point: “you see these bums…blowing up the campuses…burning up the books, I mean storming around about this issue… you name it, get rid of the war, there’ll be another one.”

On the rolling spring lawns of Kent State in the American heartland, students continued to press against an illegal, immoral war of occupation. The first entering classes of Black students formed themselves into what was to become a growing wave of Black student unions, even at Kent State. Returning veterans were throwing their medals back at the warmongers, and themselves becoming students.

Two days after the official invasion of Cambodia, 900 National Guardsmen amassed on the Kent State campus. M-1 rifles were raised, and within 13 seconds, 61 shots were fired on unarmed students — four were dead, nine wounded. It was, the official Presidential Commission on Campus Unrest later found, “a nation driven to use the weapons of war upon its youth.”

The outright murder of (white) college students engaged in peaceful protest at Kent State University, and the lesser-recognized but equally tragic murder of (Black) unarmed college students at Jackson State University that same week, were shocking although forewarned. Richard Nixon and the political class had denounced students as thugs and subversives for their resistance to the pervasive U.S. war crimes in Viet Nam, to the secret wars against Laos and Cambodia, to the flagrant arming and supporting of tyrants throughout Latin America, and to the lavish funding of apartheid and colonialism in Africa.

Invasion, lawlessness, military occupation and counter-insurgency, displacement, and systematic violence visited on others necessarily created its domestic corollary: a militarized national security state promoting heightened cruelty and callousness at home, the shredding of constitutional liberty and rights, and the unleashing of armed violence on its own citizens. The 10-year war against Viet Nam and the murderous (secret) assault on the Black freedom movement were blood cousins, Kent and Jackson State its offspring.

Today the permanent wars carried out by the U.S. military and its NATO spawn bring home their own violence and tragedy. Witness the mass killings at Fort Hood, astronomical suicide rates for returning veterans, widespread rape and assault on women in the military by their fellow soldiers, attempted assassinations of politicians, and the galloping arms race among ordinary citizens and residents who are increasingly arming up and carrying concealed weapons to work and play.

Add to that the quiet violence of a 20% child poverty rate in the richest nation in history, a prison gulag of mass incarceration sweeping up 2½ million people, harsh economic “austerity” resulting in severe slashing and degradation of education, health care, housing, public transportation and jobs at home — all of it hitting people of color disproportionally.

Empire and constant military wars not only squander the public wealth and directly destroy the lives of millions, they inevitably bring about a Panopticon-like national security state and a militarized domestic life at home.

At Kent State, students met with state violence and terror previously directed almost exclusively at the Black and Latino freedom movements. In response, 80% of U.S. colleges and universities called for some form of strike. Four million students were involved in protests, willing to face being beaten, gassed, or even shot. The National Guard was called out at 21 colleges and universities, 500 campuses cancelled classes, and 51 did not reopen until the fall. In Washington, D.C., 130,000 students mobilized against war and repression.

It was all merely prelude: greater repression and disintegration at home will accompany the long wars in Iraq, Afghanistan, Yemen, Bahrain, and Pakistan; Occupy, Madison, Trayvon, and inevitable resistance will surely follow.

[William Ayers is Distinguished Professor of Education and Senior University Scholar at the University of Illinois at Chicago. Bernardine Dohrn is Clinical Associate Professor of Law and director and founder of the Children and Family Justice Center at Northwestern University. Both Ayers and Dohrn were leaders in SDS and the New Left, and were founders of Weatherman and the Weather Underground. Find more articles by and about Bill Ayers and Bernardine Dohrn on The Rag Blog.]

1 Response to Bernardine Dohrn and Bill Ayers : Looking Back at Kent State and Jackson State