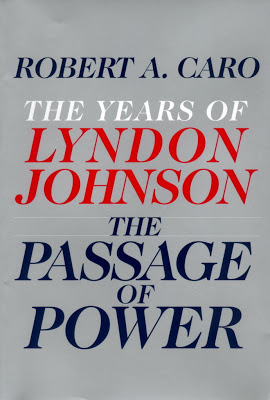 Was LBJ more Lear than Machiavelli?
Reflection on Robert Caro’s The Passage of Power

Robert Caro’s impressive biography of Lyndon Johnson seems beyond the reach of criticism, having won the National Book Critics Circle Award and been described as a “monument” (Michael Beschloss) and “at the summit of American historical writing.” (The Washington Post) Yet Caro may have identified far too much with his subject, a form of Stockholm Syndrome, perhaps, in which a prisoner identifies with his jailer.

Hardly mentioned in Caro’s latest 700 pages are two crises, each which left an indelible stain on the Johnson presidency:

Rather than minor errors, these judgments led to the polarizations that eventually destroyed LBJ and the potential of the Great Society.

Regarding Mississippi, Caro says virtually nothing about the 1964 Democratic convention controversy; the word “Mississippi” appears only three times in the Index. Yet Johnson’s backroom pressure prevented the convention delegates from voting for Fannie Lou Hamer and other MFDP delegates opposed to the all-white Mississippi delegation that was pledged to segregation and defiance of the federal government. Johnson dispatched Hubert Humphrey to “put a stop to this hell-raising,” and to “get his Reuthers and the rest of ‘em in here — and Joe Rauh — and make ‘em behave.”[1]

By all accounts, LBJ was testing Humphrey’s loyalty, and that of his closest liberal allies, before agreeing to name him the vice-presidential running mate. These machinations, including wiretaps on the MFDP and Bobby Kennedy, were stunning errors of judgment by Caro’s master politician, for they alienated the MFDP and SNCC, sickened many northern liberals, led the next year to the formation of the Black Panther Party in Lowndes County, Alabama, and, indirectly as least, four consecutive summers of black urban insurrections — and the gradual transformation of the Goldwater movement into the very white backlash Johnson feared but couldn’t prevent.

Caro mentions none of this, emphasizing instead LBJ’s masterful tactics in passing the 1964 civil rights bill.

On the tapes, LBJ reveals his control-driven fear of a floor fight over seating the MFDP, saying, “they’ll have a roll call… [and] the Northern states will probably prevail.”[2] Instead of accepting the convention’s majority choice, LBJ turned to his dark and questionable tactics, surrounded by his seeming lackeys. Humphrey told him, “We’re just not dealing with emotionally stable people on this.”[3] Reuther warned the president, “we can reduce the opposition to this to a microscopic faction so that they’ll be completely unimportant.”[4] LBJ was driven by exaggerated fears, at least at the time, of losing white Southern states if he appeared to cave in to the Mississippi Freedom Democrats. He defeated Barry Goldwater handily that November. But granting his fear for the sake of the argument, the question is why he delegated the MFDP decision to Humphrey and others who were desperate for his favor.

A last-minute White House compromise proposal for two non-voting seats for MFDP observers was bound to be rejected as too little, too late — “Didn’t come all this way for no two seats,” Ms. Hamer said in leaving. Another promise being floated — to seat the two non-voting MFDP observers and publicly guarantee a four-year track to full integration of southern delegations in 1968 — just might have succeeded if LBJ had used all his private and political powers in the weeks leading up to the convention. Instead LBJ was stubborn to the end.

“The only thing that can really screw us good is to seat that group of challengers from Mississippi… I’ll guarantee the Freedom delegation somebody representing their views like that will be seated four years from now. But we can’t do it all before breakfast,” Johnson privately said to Reuther on August 9. When the UAW leader tried to interject, “we’ll lose Mississippi, but the impact on the other southern states…” LBJ cut him off.

Whether SNCC, COFO, or the MFDP would have accepted a four-year enforceable transition is impossible to know, and probably doubtful. But the point here is that Johnson’s behind-the-scenes behavior was emotional and petulant, not that of a sophisticated Machiavellian genius. Throughout, he was convinced without evidence that Bobby Kennedy was plotting the MFDP challenge — “I rather think that this Freedom Party was born in the Justice Department.”[5] After several days of tantrums, LBJ told his aides he had drafted a lengthy retirement statement and, sunk in depression, went to bed.

Beschloss’ LBJ book includes tapes exposing White House confusion and unmistakable deceit around the August 1964 Gulf of Tonkin “incident” in North Vietnam’s waters, which LBJ quickly used to push a war authorization through a gullible Congress, with only two senators voting against, Oregon’s Wayne Morse and Alaska’s Ernest Gruening. Caro mentions none of this.

Caro provides evidence for the view that Johnson’s Vietnam escalation decision occurred immediately after John Kennedy’s assassination, marking a sharp turn in U.S. policy while masked in the rhetoric of continuity. Intriguingly, Caro promises to examine Vietnam decision-making in greater depth in the next volume of his history, including the question of whether the course of events in Vietnam would have been different had Kennedy lived, and whether other options were feasible.[6]

Caro writes that LBJ concealed his plans from both Congress and the American people. In Caro’s account, on October 2, Kennedy appointees Maxwell Taylor and Robert McNamara reported after a trip to Vietnam that 1,000 U.S. advisers could be withdrawn in 1963 and “it should be possible to withdraw the bulk of U.S. personnel” by the end of 1965, one year after JFK’s presumed re-election.“We need a way to get out of Vietnam, and this is a way of doing it,” McNamara said, according to Caro.

President Kennedy endorsed the McNamara-Taylor recommendations the next day through his press secretary Pierre Salinger.

It may be just coincidental, but McGeorge Bundy was drafting a new National Security Action Memorandum on Vietnam on November 21, the day before Kennedy’s murder.[7] Four days later, on November 26, the new U.S. president approved the memo as NSM 273.

While the main thrust of NSM 273 was to emphasize consistency with Kennedy’s Vietnam policy, it included a proposal for “possible [increased] military activity,” a reference to the recommendations of a secret committee, led by Marine General Victor “Brute” Krulak, who were proposing “progressively escalating pressure” on North Vietnam.[8] The Krulak paper was presented to Johnson at his Texas ranch on January 2, just before the inauguration. The Krulak plan recommended one year of commando raids along the North Vietnamese coast, and shelling by U.S. ships around the waters of the Gulf of Tonkin.

Those operations were to begin on February 1, just as LBJ was “juggling the figures” to make it appear that the withdrawal of the 1,000 advisers was on schedule.[9]

Once again, the Bechloss tapes were available to Caro, but are not referred to. LBJ made his famous pledge to “seek no wider war” on August 4, ironically on the same day that the bodies of three civil rights workers were found buried in a Mississippi swamp. Johnson already was implementing the Krulak recommendations to attack North Vietnam’s coastal facilities and oil refineries — “there have been some covert operations in that area we’ve been carrying on… we’ve been playing around up there,” he confided.[10]

Defense secretary McNamara formally advised LBJ on Aug. 8 that the Tonkin matter was “a very delicate subject,” and, “one that you have to dissociate from and certainly not admit that any such incident took place, but neither should you get in a position of denying it,” since it was part of “that covert operational plan.”[11]

In Caro’s perspective, Johnson’s decision to escalate was based on his desire “to keep Vietnam from becoming a major political issue” in the 1964 election. Caro fails to explain how such an historically fateful and ultimately irrational decision fits with Caro’s narrative of LBJ as the master politician of his time. Instead it proved to be one of the worst blunders in American foreign policy history.

It is quite possible that Caro will pivot to depicting LBJ as a modern King Lear in the next volume. But for now, when similar controversies over military secrecy have surrounded both the Bush and Obama presidencies, Caro regrettably gives his Lyndon Johnson a pass.