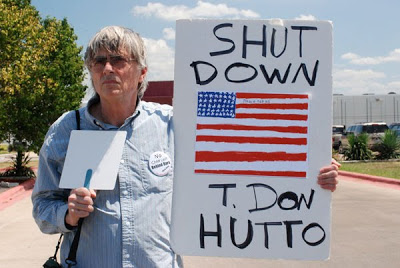 In response to mounting criticism of harsh policies, the Obama administration announced in August that the United States would begin reforming the government’s immigrant detention system. Although details are sketchy and changes will be introduced slowly, one immediate and appreciable shift in policy was the announcement that Immigrant and Customs Enforcement (ICE) will no longer send immigrant families to the T. Don Hutto Residential Center in Taylor, Texas, just northwest of Austin.

That the administration mentioned Hutto specifically is not surprising; news media, religious groups, and progressive activists have criticized the facility for locking up children since Hutto began detaining families in May 2006. In 2007, the American Civil Liberties Union filed a lawsuit against ICE on behalf of families detained at Hutto, which led to improved conditions at the facility. After investigating the prison in June 2009, the Inter-American Commission on Human Rights (IACHR) announced in a press release that, even though conditions had improved since the ACLU lawsuit, the continued detention of asylum seekers and their children at Hutto violated principles of international law.

Bob Libal is the Texas coordinator for Grassroots Leadership, a southern based social justice organization taking on private prisons, and an activist in the movement to end immigrant detention at Hutto. Lauren Martin is a member of Texans United for Families, an Austin-based coalition working to end family detention, and is a PhD student in geography at the University of Kentucky.

Talk about the history of the T. Don Hutto facility.

Bob Libal: Basically, Hutto was a medium-security prison that Corrections Corporation of America took over in the late ’90s. It was a failing private prison that couldn’t retain much of a population base. CCA had contracted with U.S. Marshals, with ICE to house adult detainees, and both of those contracts had fallen through. Then, in the spring of 2006 they reopened it with the announcement that they were going to be detaining immigrant families, including small children for ICE. This was a pretty big expansion of the family detention system in this country.

In August, the Obama administration announced that the U.S. government would no longer be holding immigrant families at facilities such as Hutto. Why did they make this move?

The announcement is that they would be either transferring families to Berks or releasing them on alternatives-to-detention programs. Berks is full right now: it’s at capacity at 82 beds, so in reality what that’s translated to is they’re releasing families into alternatives-to-detention programs or releasing them with notices to appear at their immigration hearings. They also are taking the new family detention centers off the table. I think it’s a pretty substantial victory. The New York Times described it as the first major departure on immigration policy from the Bush administration.

Is this going back to the idea of “catch and release?”

Bob Libal: I’ve heard John Morten, who is the Assistant Secretary for Homeland Security, say “No, we’re not returning to that.” But I think the people who are getting out of Hutto are getting out on notices to appear. I think that it’s still unclear how this sort of processing is going to take place. Say that you’re apprehended or apply for asylum on the border. What happens to you? Are you then just released into an alternatives-to-detention program, or are you sent to Berks and then released? I think we don’t know that yet. What it does mean is that, at any one time, there are a lot fewer families in detention.

Lauren Martin: I think it’s important to differentiate, too, between “catch and release,” which is really vague and could mean anything, and the bond and parole procedures that have been in place and are available to many immigrant detainees. That’s often what families are released on. There is some degree of supervision, and they also pay quite a bit of money either in bond or for parole to participate in those programs. So “release” is misleading. Just because they’re not in Hutto, there are still other forms of institutional supervision. Alternatives-to-detention programs have a wide range of forms of supervision.

“Catch and release” is this phrase that critics of this policy bandy about.

Lauren Martin: Right. And the justification for opening Hutto was that they need to move from “catch and release” to “catch and return.” There’s a presumption of illegality — that all these families would be released into the population and abscond. Michael Chertoff said that. A vast majority of the families that have been detained at Hutto are asylum seeking families, so it’s a lot more complicated than this simplistic illegal-versus-legal dichotomy.

Hutto has not been shut down, though. It’s been converted into a detention center for women, correct?

Lauren Martin: Yes. After the legal settlement mandated that they do periodic reviews — every 30 days they have to review whether a specific family qualifies to be released on bond or parole — once they started doing that, they did start releasing families a lot faster, which made the population drop. So they filled Hutto halfway with immigrant women. As families are released, it will be filled completely with immigrant women without children. That’s what they’ve announced. It’s not closed.

What now? Will Grassroots Leadership continue to focus on Hutto?

Lauren Martin: I work with Texans United for Families, a coalition of people that have been fighting family detention at Hutto. I can sort of speak for the coalition, but not Grassroots Leadership. We’re trying to figure out what the announcement really means, so we’ve been staying in close contact with Washington, D.C.-based advocates who have closer relationships with ICE, and the attorneys in the lawsuit who are actually representing folks at Hutto, to see what’s going on there and to make sure that everything continues to go well. The next project is to figure out how to use the energy from the victory — because it is still a victory, even it’s a partial one — how to roll that in to serve the next campaign. What are the lessons we’ve learned? How do we build on it and expand it?

We also have to think about, what do we do when there are not families detained? That was clearly something that mattered to a lot of people. And widening the question to detention requires very careful strategies about messaging, although there’s plenty to organize around.

Do you think there’s a climate for expanding this message to include more than just families? To target detention itself?

Lauren Martin: I think so. There have been a lot of really successful campaigns in the United States around other family-related issues, not necessarily family detention. In New York, Families for Freedom is a close ally of ours, and they’ve been organizing around the Child Citizen Protection Act, which is basically an act that says if someone has a citizen child, then the immigration judge will get some discretion to not deport the parents. Right now, in many situations, judges get no discretion. They don’t get to say, “This person clearly has family ties, they have a few kids who need them, so it would be better not to deport this person.” Immigration judges’ hands are tied by the way our legislation is written right now.

Bob Libal: We will certainly continue to draw attention to the broader issues of immigrant detention and private prisons. And I believe that we will continue to draw attention to Hutto, since it’s right outside of Austin and still a private prison that holds immigrant detainees. But I think that it is important to think strategically about how we can best push back on that system. I don’t think we’ve figured out exactly what the next big campaign is going to be, because there are so many immigrant detention centers. It’s important to both target geographic locations — like a facility — but also work towards policy change.

I think that is one of the lessons of the Hutto campaign: You can target a facility to make it very infamous, which the movement did to Hutto. But at the same time, it was drawing attention to a broader policy, which is family detention. I think we’ve pushed back family detention policy by drawing attention to Hutto. Hopefully we’ll be able to do that again in the future: by targeting a facility and pushing back on a policy like mandatory detention, secure communities, or any of these other really horrendous programs that lead to the incarceration of immigrants on a mass scale.