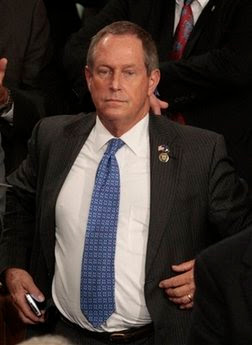 Rep. Charles Boustany of Louisiana, who delivered the Republican rebuttal to the President’s health care speech, once got scammed while trying to buy a British title. Apparently, his colleague from South Carolina is taking GOP Anglophile tendencies into his own hands by heckling a speech to a joint session of Congress, which is customary when the House of Commons meets the Prime Minister… but we don’t normally run our Congress that way.

Whether is was “You lie!” or “Liar!” it was the unruly gentleman from South Carolina with his pants on fire, even if the bill did not specifically exclude the undocumented, which it does.

Let me pause to say the heresy: if it were possible to cover undocumented workers, we should. This is not a play for Hispanic votes because I don’t run for office anymore. This is economic reality. The more people in the pool, the more people paying premiums, the cheaper health insurance is. So instead of including undocumented — am I allowed to say human beings? — in the pool, we will continue to treat them in emergency rooms. That’s bad policy and that makes no economic sense.

The anti-immigrant crowd is either too racist or too stupid to wrap their minds around the fact that each person added to the insurance pool costs the ratepayers — us — less money rather than more. Health insurance is not charity.

What has become of politics where it’s necessary to deny being charitable?

Anyway, here’s why Congressman Pants on Fire would be wrong even without the plain language of the bill.

This is a coverage mandate. Everybody is required to buy health insurance. See above. A universal pool is cheapest. As the President said, it works like mandatory automobile liability insurance, complete with an assigned risk pool so people are not required to do the impossible.

To enforce such a mandate, government has to set up a wicket we all pass. In the case of automobile liability insurance, that wicket is registration of your automobile or renewing your driver’s license.

In the case of health insurance, that wicket is going to be form 1040 or 1040EZ, filed every year with the Internal Revenue Service. This is because so much of the bill happens on that form: subsidies for low numbers reported on that form, credits against sums owing on that form.

That wicket will miss the elderly, but they have Medicare.

That wicket will miss children, but they have coverage from their parents or S-Chip.

And it will miss the undocumented because they have no Social Security numbers and their very employment is unlawful. So if the mandate hits them, how will it be enforced?

The nonsense here, alongside the racism, is that medical insurance will, if Obama’s proposal passes, be free.

The other nonsense is that the government will run the entire system, like it does in Great Britain, the country where the two congressmen who set me on this rant will find their hereditary titles and their opportunity to shout down the country’s chief executive. I guess they are Anglophiles in all but health care.