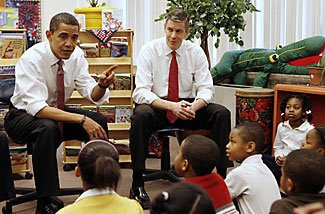 “Arne Duncan was the smart choice.” Nominee for education secretary Duncan, with President-elect Obama, speaks to children at a school in Chicago. Photo by Jeff Haynes / Reuters.
‘Since the Obama victory, many people seem to be suffering a kind of post-partum depression: unable to find any polls to obsess over, we read the tea-leaves and try to penetrate the president-elect’s mind.’
By Bill Ayers / January 2, 2009

[Bill Ayers, known for his sixties activism, is an author and the Distinguished Professor of Education and Senior University Scholar at the University of Illinois at Chicago.]

Of course I would have loved to have seen Linda Darling-Hammond become Secretary of Education in an Obama administration. She’s smart, honest, compassionate and courageous, and perhaps most striking, she actually knows schools and classrooms, curriculum and teaching, kids and child development. These have never counted for much as qualifications for the post, of course, and yet they offer a neat contrast with the four failed urban school superintendents–Michelle Rhee, Joel Klein, Paul Vallas, and Arne Duncan — who were for weeks rumored to be her chief competition.

These four, like George W. Bush’s Secretary of Education, Rod Paige of the fraudulent Texas-miracle, have little to show in terms of school improvement beyond a deeply dishonest public relations narrative. Teacher accountability, relentless standardized testing, school closings, and privatization — this is what the dogmatists and true-believers of the right call “reform.”

Michelle Rhee of Washington D.C., the most ideologically-driven of the bunch, warranted a cover story in Time in early December called “How to Fix America’s Schools” in which she was praised for making more changes in a year and a half on the job than other school leaders, “even reform-minded ones,” make in five: closing 21 schools (15% of the total), firing 100 central office personnel, 270 teachers, and 36 principals. These are all policy moves that are held on faith to stand for improvement; not a word on kids’ learning or engagement with schools, not even a nod at evidence that might connect these moves with student progress. But of course evidence is always the enemy of dogma, and this is faith-based, fact-free school policy at its purest.

So I would have picked Darling-Hammond, but then again I would have picked Noam Chomsky for state, Naomi Klein for defense, Bernardine Dohrn for Attorney General, Bill Fletcher for commerce, James Thindwa for labor, Barbara Ransby for human services, Paul Krugman for treasury, and Amy Goodman for press secretary. So what do I know?

Darling-Hammond would not have been a smart pick for Obama. She was steadily demonized in a concerted campaign to undermine her effectiveness, and she would surely have had great difficulty getting any traction whatsoever for progressive policy change in this environment. Arne Duncan was the smart choice, the unity choice — the least driven by ideology, the most open to working with teachers and unions, the smartest by a mile — and let’s wish him well.

But there’s a deeper point: since the Obama victory, many people seem to be suffering a kind of post-partum depression: unable to find any polls to obsess over, we read the tea-leaves and try to penetrate the president-elect’s mind. What do his moves portend? What magic or disaster awaits us? With due respect, this is a matter of looking entirely in the wrong direction.

Obama is not a monarch — Arne Duncan is not education czar — and we are not his subjects. If we want a foreign policy based on justice, for example, we ought to get busy organizing a robust anti-imperialist peace movement; if we want to end the death penalty we better get smart about changing the dominant narrative concerning crime and punishment. We are not allowed to sit quietly in a democracy awaiting salvation from above. We are all equal, and we all need to speak up and speak out right now.

During Arne Duncan’s tenure in Chicago, a group of hunger-striking mothers organized city-wide support and won the construction of a new high school in a community that had been underserved and denied for years. Another group of parents, teachers, and students mobilized to push military recruiters out of their high school; Duncan didn’t support them and he certainly didn’t lead the charge, but they won anyway. If they’d waited for Duncan to act they’d likely be waiting still. Teachers at another school refused to give one of the endless standardized tests, arguing that this was one test too many, and they organized deep support for their protest; Duncan didn’t support them either, but they won anyway. If they’d waited for Duncan, they’d be waiting still. Why would anyone sit around waiting for Arne now? Stop whining; get busy.

In the realm of education, there is nothing preventing any of us from pressing to change the dominant discourse that has controlled the discussion for many years. It’s reasonable to assume that education in a democracy is distinct from education under a dictatorship or a monarchy, but how? Surely school leaders in fascist Germany or communist Albania or medieval Saudi Arabia all agreed, for example, that students should behave well, stay away from drugs and crime, do their homework, study hard, and master the subject matters, so those things don’t differentiate a democratic education from any other.

Democracy, after all, is geared toward participation and engagement, and it’s based on a common faith: every human being is of infinite and incalculable value, each a unique intellectual, emotional, physical, spiritual, and creative force. Every human being is born free and equal in dignity and rights, each is endowed with reason and conscience, and deserves, then, a sense of solidarity, brotherhood and sisterhood, recognition and respect.

We want our students to be able to think for themselves, to make judgments based on evidence and argument, to develop minds of their own. We want them to ask fundamental questions—Who in the world am I? How did I get here and where am I going? What in the world are my choices? How in the world shall I proceed? — and to pursue answers wherever they might take them. Democratic educators focus their efforts, not on the production of things so much as on the production of fully developed human beings who are capable of controlling and transforming their own lives, citizens who can participate fully in civic life.

Democratic teaching encourages students to develop initiative and imagination, the capacity to name the world, to identify the obstacles to their full humanity, and the courage to act upon whatever the known demands. Education in a democracy should be characteristically eye-popping and mind-blowing–always about opening doors and opening minds as students forge their own pathways into a wider world.

How do our schools here and now measure up to the democratic ideal?

Much of what we call schooling forecloses or shuts down or walls off meaningful choice-making. Much of it is based on obedience and conformity, the hallmarks of every authoritarian regime. Much of it banishes the unpopular, squirms in the presence of the unorthodox, hides the unpleasant. There’s no space for skepticism, irreverence, or even doubt. While many of us long for teaching as something transcendent and powerful, we find ourselves too-often locked in situations that reduce teaching to a kind of glorified clerking, passing along a curriculum of received wisdom and predigested and often false bits of information. This is a recipe for disaster in the long run.

Educators, students, and citizens must press now for an education worthy of a democracy, including an end to sorting people into winners and losers through expensive standardized tests which act as pseudo-scientific forms of surveillance; an end to starving schools of needed resources and then blaming teachers and their unions for dismal outcomes; and an end to the rapidly accumulating “educational debt,” the resources due to communities historically segregated, under-funded and under-served. All children and youth in a democracy, regardless of economic circumstance, deserve full access to richly-resourced classrooms led by caring, qualified and generously compensated teachers. So let’s push for that, and let’s make it happen before Arne Duncan or anyone else grants us permission.