Bill Oakey :
METRO | JAZZ | The magic of Sarah Sharp’s music: Be careful, or it will sweep you away

Sarah is poised to scale the tall slopes that stand between her and national record label success. 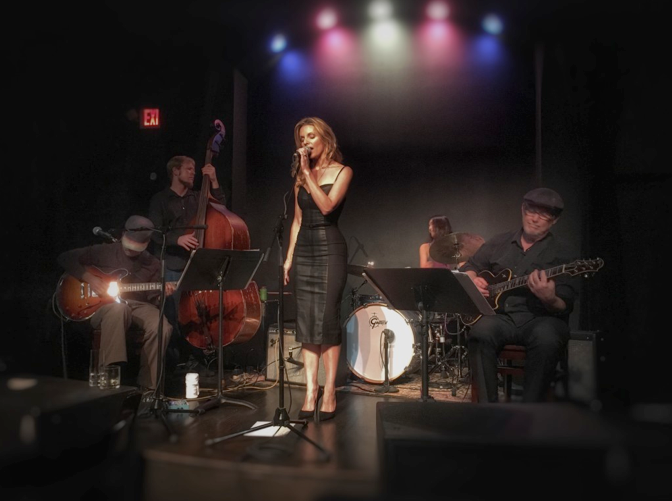 Sarah Sharp will be Thorne Dreyer’s guest on Rag Radio — in conversation and live performance — Friday, July 8, 2-3 p.m., on KOOP 91.7-FM in Austin and streamed live here. Go to the Rag Radio page for more information about Rag Radio, including other stations where the show can be heard, and to listen to the podcast after the original broadcast.

AUSTIN — They say that life’s unexpected surprises only come along once in a blue moon. Well, the sun was still shining when I left an affordability discussion in the mayor’s office to catch the bus home a few weeks ago. I made an impulsive decision to duck into the Elephant Room and grab a quick beer. Once I stepped up to the bar, I heard an incredible voice coming through the speaker system. It was late afternoon and the club had just barely opened.

I was told that the magical voice came from a CD by the Jitterbug Vipers, and that the lead singer’s name was Sarah Sharp. Having been out of touch with the local music scene recently, I did not recognize her name or that of the band. But I wrote those names down and told the club manager that I had to get ahold of any CD’s that Sarah Sharp might have available. The music is a cool, breezy style of jazz with lots of swing.

Coming from the speakers was the title song from the Jitterbug Vipers album, ‘Phoebe’s Dream.’

What I heard coming from the speakers was the title song from the 2013 Jitterbug Vipers album, Phoebe’s Dream. It’s an original tune written by Sarah. Further into the album, I noticed two more originals. The one called “That Was Just the Sauce Talking” is a lively, danceable tune that is so catchy that it’s hard to get it out of your head. It’s the kind of song that could be a big hit if enough people got exposed to it. Then I noticed an original ballad called “Viper Moon.” Sarah’s splendid vocals on that one made me want to track her down and buy the CD as soon as I could. A quick trip to her website led me to her email address.

Music has always been my greatest passion. I started collecting records in 1952 when I was five years old. These days, my iTunes library has in excess of 12,500 songs, mostly from the “golden age” of music, from the 1940’s through the 1960’s. I have several renditions of many popular jazz and swing standards from the likes of Peggy Lee, Rosemary Clooney, Frank Sinatra, Dean Martin, Ella Fitzgerald, etc. And the collection extends to everything good by Elvis, the Beatles, Willie Nelson, Hank Williams, and Asleep at the Wheel. Then throw in Petula Clark, Toni Price, Tony Bennett, and others from a wide spectrum of genres.

I found myself caught up in an unexpected
life adventure.

The “discovery” of Sarah Sharp made me want to delve into the musical archives and try to match her amazing voice with some of the finest songs of the golden age, including not only major hits but quite a few obscure gems and rare versions. In so doing, I found myself caught up in an unexpected life adventure. To help you along as I describe the journey, check out the picture at the top of this article of Sarah onstage.

I first saw Sarah perform with a trio at the Elephant Room. She met me during the break and brought the CD’s that I had requested. I wrote down the songs that she performed onstage, many of which I was surprised that someone her age would even know about. Listening to Mitch Watkins playing guitar with Sarah sent me into a strange time warp. Back in 1975 and 1976, I spent many an evening at the Blue Parrot on West 15th Street, absorbing the music of another jazz vocalist, Peggy Lauren. Her guitarist was a much younger Mitch Watkins. These shows introduced me to the great standards by the Gershwins and Cole Porter.

At the Elephant Room with Sarah Sharp, old memories morphed into the excitement of realizing that truly wonderful music is timeless. Just like nothing in the book world reads better than a good story, no modern trend in music can replace the simple beauty and the emotional appeal of a well written, exquisitely delivered song. If you spice up that recipe with a few original tunes that are just as much fun as the old standards, then you’ve got a winning combination.

I thought that the show couldn’t possibly
get any better.

Toward the end of the evening, I thought that the show couldn’t possibly get any better. Then Sarah stepped up to the mike and hit me with “As Time Goes By,” a huge personal favorite done in the style of Peggy Lee. I was hooked for sure.

The very next morning found Sarah and me chatting over coffee at Mozart’s. We both swapped stories about our past music experiences. I brought along some music magazines that I had written feature articles for quite a number of years ago. She told me about her stint with the Jitterbug Vipers, and explained that she left the group last year after their revered guitarist, Slim Richey, passed away.

Now, Sarah is poised to scale the tall slopes that stand between her and national record label success. That musical milestone definitely needs to happen, and the sooner the better. I will be doing everything that I can to help.

Round up some friends and come to one of Sarah’s live shows.

What you should do is round up some friends and come to one of Sarah’s live shows. You can catch her at the Elephant Room on Monday, July 18, with a small group. Or see her sometime soon at the Continental Club with a full band. Be sure to listen to her Rag Radio appearance from 2-3 p.m. this Friday, July 8, on KOOP 91.7-FM (stream it live here), or listen to the podcast afterwards (find the link on the Rag Radio page).

You can use these links to learn more about Sarah, and to sample her music and purchase the tracks.

[Bill Oakey is an Austin artist-photographer, music writer, and civic activist, who publishes the blog, AustinAffordability.com. Since his early childhood, Bill has enjoyed writing and telling stories, often in the form of humor and satire. Retired from his finance-related State of Texas agency “day job” since 2007, Bill researches music history from the ’50s & ’60s and exhibits his photographs in local art shows.]

4 Responses to Bill Oakey :
METRO | JAZZ | The magic of Sarah Sharp’s music: Be careful, or it will sweep you away