Despite the repressive policies of the Mubarak regime, Egyptians continued to fight for the democratization of their society. 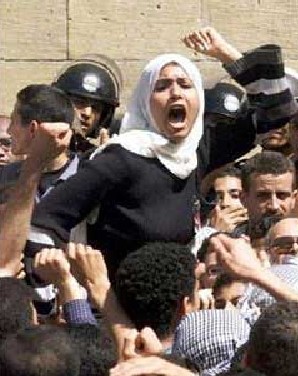 Despite the politically repressive policies of the dictatorial Mubarak regime during the 1990s, at the beginning of the 21st-century people in Egypt continued to organize and fight for the democratization of Egyptian society.

According to Hossam El-Hamalawy’s 2007 MERIP article, “Comrades and Brothers,” a new left of younger Egyptian activists “whose two main pillars are the Revolutionary Socialist Organization and a growing left-leaning human rights community” which had “different attitudes toward Islamism than those held by the previous `communist waves,'” developed in Egypt during the late 1990s and early 21st century.

An organization of younger secular left trotskyite Egyptian activists, the Revolutionary Socialist Organization, had been formed in April 1995, at which time it put forth the slogan, “Sometimes with the Islamists, never with the state’ in the literature it distributed on university campuses and elsewhere” in Egypt, according to the same 2007 MERIP article.

Although the Revolutionary Socialist students at Cairo and Ayn Shams University “confronted the Muslim Brothers on issues such as freedom of expression and the rights of women and Coptic Christians,” their broadsides on campus also “regularly carried denunciations of military tribunals’ sentences handed down to Muslim Brothers,” according to Hossam El-Hamalawy’s 2007 MERIP article.

And by 1999, “the Muslim Brotherhood students at Cairo University allowed the Revolutionary Socialist students to speak at rallies held on campus against the U.S. airstrikes on Iraq,” according to the same article..

By 2000 the Revolutionary Socialists had recruited around 200 secular left activists as members; and during the second Palestinian intifada of the early 21st century on the Israeli-occupied West Bank, “their ranks…swelled thanks to their role in the Egyptian movement of solidarity with the Palestinians, at a time when the Muslim Brothers largely abstained from street action” and “Cairo and several provinces witnessed their largest and most boisterous demonstrations since the 1977 uprising following…Sadat’s attempt to remove state subsidies for bread and other staples,” according to Hossam El-Hamalawy’s 2007 MERIP article.

But “in early April 2002, precisely following the outbreak of the leftist-led, pro-Palestinian riots at Cairo University, members of the Muslim Brothers began turning out for events organized by the Egyptian Popular Committee for the Solidarity with the Palestinian intifada,” and “on April 5, 2002, a group of young Muslim Brothers published an open letter to Supreme Guide Mustafa Mashhour in the London-based daily al-Hayat…demanding more involvement in the Palestinian solidarity movement,” according to the same article.

Revolutionary Socialist members were then subsequently approached by Muslim Brothers representatives who suggested that “Islamists collaborate with the left in the pro-intifada and anti-war movements.”

By early 2003 “the left-leaning Palestine solidarity committee” in Egypt had “evolved into an anti-war movement, convening small street actions, which exploded into running clashes with the police in downtown Cairo on March 19 and 20, 2003,” after the Bush Administration launched its war for regime change in Iraq in 2003, according to the 2007 MERIP article. And by the end of 2004, Egypt’s anti-war movement had evolved into an anti-Mubarak movement.

This new anti-Mubarak movement was composed of two organizations: Kifaya (the Egyptian Movement for Change) and the Popular Campaign for Change, “which was more Marxist in composition, and included the Revolutionary Socialists, left-wing human rights activists and independent leftists,” according to Hossam El-Hamalawy’s 2007 MERIP article.

Subsequently, “after a series of Kifaya demonstrations, a group of Muslim Brotherhood activists…held talks with Revolutionary Socialists and independent leftists, resulting in the launching of the National Alliance for Change in June 2005,” according to the same article.

And this “rapprochement between Islamist and the left continued when students from the Revolutionary Socialists’ Tendency, Muslim Brothers and some independents” at Helwan and Cairo Universities, “formed the Free Student Union (FSU) in November 2005, with the aim of acting as a parallel organization to the government-dominated student unions.”