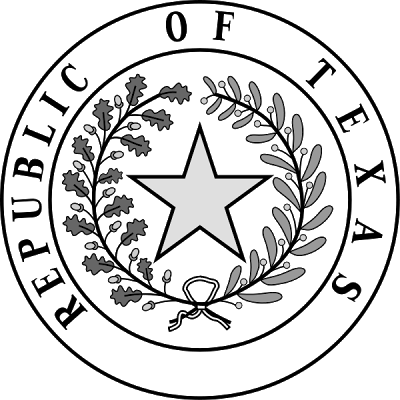 Seal of the Republic of Texas, 1839. Image from Wikimedia Commons.
The hidden history of Texas

[This is Part 4 of Bob Feldman’s Rag Blog series on the hidden history of Texas.]

According to Alwyn Barr’s Black Texans: A History of African Americans in Texas, 1528-1995, “several free blacks and a few slaves served in the Texas Revolution;” and, ironically, some free African-Americans like “Robert Thompson and the Ashworths provided funds and supplies to the Texas cause.”

Yet the new white supremacist Republic of Texas government treated neither free blacks nor enslaved blacks as equals between 1836 and 1845. As black Texans recalled, for example, “under republic laws, free persons of one-eighth Negro blood could not vote, own property, testify in court against whites, or intermarry with them;” and in 1840 the Houston City Council even “denied free Negroes and slaves the right to hold dances without the permission of the mayor” of Houston.

In addition, between 1836 and 1845, no “free person of color” was allowed to live in the Republic of Texas without the permission of Texas’s legislative body.

Given the increased special oppression faced by African-Americans after the Republic of Texas was established, it’s not surprising that “escaped slaves fought with the Cherokees against the Texas army which drove that tribe from East Texas in 1838” (before most Cherokees were soon forced to move out of the Republic of Texas in July 1839 after the Battle of the Neches), according to Black Texans.

Because there were no longer any restrictions placed on the importation of slaves into Texas from the United States after the independent Republic of Texas was established, between 1836 and 1840 the number of African-American slaves residing in Texas increased from 5,000 to 11,323.

According to Black Texans, “about 40 percent of Texas slaves lived along the coast and in the East Texas river valleys where they labored in groups — of from 20 up to 313 primarily field hands — on plantations to produce cotton, corn and a limited amount of sugar in coastal countries below Houston.” And “by 1840 there were 145 slaves among the 850 or so inhabitants” of Austin, Texas, according to David Humphrey’s 1985 book, Austin: An Illustrated History.

The same book also recalled that the Republic of Texas’s “first permanent capitol” in Austin “was constructed in significant part by slaves who were signed on for the job” and “the hiring system provided income for [white Texas] masters who owned more slaves than they had work for.” But as early as the late 1830s, “some of the African-American slaves in Austin resisted their bondage by running away” and “headed for Mexico and the freedom to be gained by crossing the Rio Grande,” according to Austin: An Illustrated History.

It was also in the late 1830s that the first attempt to organize Texas workers into a labor union happened. As F. Ray Marshall’s 1967 book, Labor in the South recalled, “probably the first union organized in Texas was the Texas Typographical Society formed at Houston in 1838.”

In March 1842, Mexican government troops also marched into Texas again, and on Sept. 11, 1842 the Mexican Army actually reestablished Mexican control of San Antonio for a week — until the Republic of Texas’s predominantly Anglo defenders recaptured San Antonio on Sept. 18, 1842.

Two years later a politician named James Polk was elected U.S. President in 1844, after running on a platform which called for the U.S. government to acquire the Republic of Texas. And after Congress invited the Republic of Texas to join the United States as another state, Polk ordered U.S. General Zachary Taylor to lead U.S. troops into position near Texas’s disputed Rio Grande border in June 1845.

The Texas Admission Act was then signed by Polk on Dec. 24, 1845, Mexico’s former territory of Texas officially became part of the United States, and the independent Republic of Texas now ceased to exist.