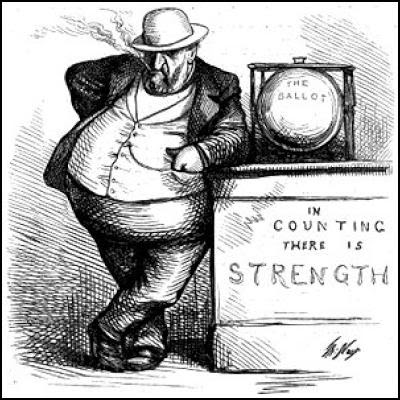 Boss Tweed: “As long as I count the votes, what are you going to do about it?” Cartoon by Thomas Nast /Harper’s Weekly, October 7, 1871. Image from Scoop Independent News.
Will nine GOP governors electronically
flip Romney into the White House?

In tandem with the GOP’s massive nationwide disenfranchisement campaign, they could — in the dead of election night — give Romney a victory in the Electoral College.

Journalist Harvey Wasserman and author Tova Andrea Wang will discuss Voter Suppression in America with Thorne Dreyer on Rag Radio, Friday, October 5, 2012, 2-3 p.m.(CDT), on KOOP 91.7-FM in Austin, and streamed live on the Internet. Rag Radio is rebroadcast on WFTE-FM in Scranton and Mt. Cobb, PA, Sunday mornings at 10 (EDT).

Nine Republican governors have the power to put Mitt Romney in the White House, even if Barack Obama wins the popular vote.

With their secretaries of state, they control the electronic vote count in nine key swing states: Florida, Virginia, Pennsylvania, Ohio, Michigan, Iowa, Arizona, and New Mexico. Wisconsin elections are under the control of the state’s Government Accountability Board, appointed by the governor.

In tandem with the GOP’s massive nationwide disenfranchisement campaign, they could — in the dead of election night — flip their states’ electronic votes to Romney and give him a victory in the Electoral College.

Thankfully, resistance has arisen to the disenfranchisement strategy, which seems designed to deny millions of suspected Democrats the right to vote. The intent to demand photo ID for voting could result in some 10 million Americans being disenfranchised, according to the Brennan Center at New York University. Other methods are being used to strip voter rolls — as in Ohio, where 1.1 million citizens have been purged from registration lists since 2009. This “new Jim Crow” — personified by groups like Houston-based True the Vote — could deny the ballot to a substantial percentage of the electorate in key swing states.

This massive disenfranchisement has evoked a strong reaction from voting rights activists, a number of lawsuits, major internet traffic and front page and editorial coverage in The New York Times.

But there has been no parallel campaign to guarantee those votes are properly counted once cast. Despite serious problems with electronic tabulations in the presidential elections of both 2000 and 2004, electronic voting machines have spread further throughout the country.

The machines can quickly tabulate a winner. But their dark side is simple: there is no way to monitor or double check the final tally. These partisan Republican vote counting companies have written contracts to avoid transparency and open records laws.

American courts have consistently ruled that the hardware and software used in e-voting machines is proprietary. For example, California’s Public Records Act (CPRA) contains a Trade Secret Exemption. The courts in California apply a “balancing test” to determine whether the Trade Secret Exemption applies, but the contracts with voting machine vendors are written in such a way that the court usually has no other choice but to side with the vendors and the state and county election officials who inked the contract. High priced attorneys like Daniel McMillan of the Jones Day firm are often hired to “clarify” the law for the court.

In a filing with the Voting Systems Procedures Panel of the California Secretary of State’s office during the 2004 election, McMillan hammered out a “Stipulated Confidentiality Agreement” that states in part that a public records request by a voting activist “contain[s] confidential proprietary or trade secret information” and thus, is not a public record.

Also that year, McMillan showed up in Georgia on behalf of the infamous Diebold Election Systems company and invoked the Peach State’s Trade Secret Exemption to the open record law. McMillan wrote: “If information constitutes a trade secret under the Georgia Trade Secrets Act, the government agency in custody of the information has a duty to protect the information” from public scrutiny.

McMillan goes on to argue that there’s also a Computer Software Exclusion that, “To the extent that any request is made for Diebold’s computer program or software, such a request would not be a valid request for a public record.” Diebold’s attorney cited the concern that “…it makes it easier to sabotage and hack the system and circumvent security features” if there’s transparency.

That same year in Ohio, Diebold’s secret pollbook system “accidentally” glitched 10,000 voters in the Cleveland area from the registration rolls. During the 2004 election in Toledo, thousands of voters lost their votes on Diebold optiscan machines that were improperly calibrated or had the wrong markers. How the calibration and markers work is a trade secret.

So, even the election boards that buy them cannot access their tabulation codes. The bulk of the major e-voting machine companies are owned by Republicans or by corporations whose roots are difficult to trace. While We Still Have Time by Sheila Parks of the Center for Hand Counted Ballots warns that we enter the 2012 election with no reliable means of guaranteeing that the electronic vote count will be accurate.

In fact, whether they intend to do it or not, the Republican governors of the nine key swing states above have the power to flip the election without significant public recourse. Except for exit polls there is no established way to check how the official electronic vote count might square with the actual intent of the electorate. And there is no legal method by which an electronic vote count can be effectively challenged.

There is unfortunate precedent. In the heat of election night 2000, in Volusia County, Florida, 16,000 electronic votes for Al Gore mysteriously disappeared, and 4,000 were erroneously awarded to George W. Bush, causing an incorrect shift of 20,000 votes. This was later corrected. But the temporary shift gave John Ellis at Fox TV News (Ellis is George W. Bush’s first cousin) an opening to declare that the GOP had won the presidency. NBC, CBS, and ABC followed Fox’s lead and declared Bush the winner based on a computer error. That “glitch,” more than anything else, allowed the Republicans to frame Gore as a “sore loser.”

In Ohio 2004, at 12:20 election night, the initial vote tabulation showed John Kerry handily defeating Bush by more than 4%. This 200,000-plus margin appeared to guarantee Kerry’s ascent to the presidency.

But mysteriously, the Ohio vote count suddenly shifted to Smartech in Chattanooga, Tennessee. With private Republican-connected contractors processing the vote, Bush jumped ahead with a 2% lead, eventually winning with an official margin of more than 118,000 votes. Such a shift of more than 6%, involving more than 300,000 votes, is a virtual statistical impossibility, as documented in our Will the GOP Steal America’s 2012 Election?.

That night, Ohio’s vote count was being compiled in the basement of the old Pioneer Bank building in Chattanooga, Tennessee. The building also housed the servers for the Republican National Committee and thus the e-mail of Bush advisor Karl Rove. Secretary of State Blackwell was co-chair of the Ohio Committee to Re-Elect Bush and Cheney. He met earlier that day in Columbus with George W. Bush and Karl Rove. That night, he sent the state’s chief IT worker home early.

The official Ohio vote count tabulation system was designed by IT specialist Michael Connell, whose computer company New Media was long associated with the Bush family. In 2008 Connell died in a mysterious single-engine plane crash after being subpoenaed to testify in the federal King-Lincoln-Bronzeville voter rights lawsuit (by way of disclosure: Bob is an attorney and Harvey a plaintiff in this lawsuit).

FreePress.org covered the vote shift in depth. The King-Lincoln suit eventually resulted in a federal injunction ordering Ohio’s 88 counties to turn over their ballots and election records.

But 56 of Ohio’s 88 counties violated the injunction and destroyed their election records. Thus no complete recount of Ohio 2004 has ever been done. More than 90,000 “spoiled” ballots, like those in Toledo, went entirely uncounted, and have since been destroyed.

No way was ever found to verify the 2004 electronic vote count. There are no definitive safeguards in place today.

In 2008, swarms of election protection volunteers filled the polling stations in Ohio and other swing states. They guaranteed the right to vote for many thousands of Americans who might otherwise have been denied it.

They had no means of guaranteeing the accuracy of the electronic vote count. But Pennsylvania, Ohio, and Michigan all had Democratic governors at the time. Florida’s governor was the moderate Republican Charlie Crist, not likely to steal an election for a party he would soon leave.

At the time, we advocated banning money from electoral politics, abolishing the Electoral College, universal automatic voter registration for all U.S. citizens, universal hand-counted paper ballots, and a four-day weekend for voting, with polls worked and ballots counted by the nation’s students.

But as Sheila Parks puts it in her new book, which is subtitled The Perils Of Electronic Voting Machines and Democracy’s Solution: Publicly Observed, Secure Hand-Counted Paper Ballots (HCPB) Elections: “In 2010, ultra-right-wing Republican governors were elected in Alabama, Arizona, Florida, Maine, Michigan, New Jersey, Ohio, South Carolina, Texas, and Wisconsin. In several of these states, these governors were not part of a long line of Republican governors. In fact, in some of these states, these governors interrupted a long line of Democratic governors.”

So this year Rick Scott is governor in Florida, Tom Corbett in Pennsylvania, John Kasich in Ohio, Rick Snyder in Michigan, Scott Walker in Wisconsin, and Jan Brewer is in Arizona. All are seen as hard-right Republicans unlikely to agonize over flipping a Barack Obama majority into a victory for Mitt Romney.

That doesn’t mean they would actually do such a thing. But the stark reality is that if they choose to, they can, and there would be no iron-clad way to prove they did.

Another stark reality: hundreds of millions of dollars are being spent to win this election by multi-billionaires Sheldon Adelson, Charles and David Koch, the Chamber of Commerce, and other corporate interests. For them, spending a few extra million to flip a key state’s electoral votes would make perfect sense.

While Obama seems to be moving up in the polls, the huge reservoir of dollars raised to elect Mitt Romney will soon flood this campaign. We might anticipate well-funded media reports of a “surge” for Romney in the last two weeks of the election. Polls could well show a “close race” — for Congress as well as the presidency — in the early hours of election day.

And then those electronic voting machines could be just as easily flipped on election night 2012 as they were in Ohio 2004.

Would this batch of swing state Republicans do that for Romney? We don’t know.

COULD they do it? Absolutely.

Would you be able to find definitive, legally admissable proof that they did it? No.

Would the courts overturn such a tainted victory? Not likely.

What could ultimately be done about it?

In the short term: nothing.

In the long-term, only a bottom-up remaking of how we cast and count ballots can guarantee this nation anything resembling a true democracy. It is, to put it mildly, a reality worth fighting for.