Book Banning in Round Rock : Ta Ta to TTYL 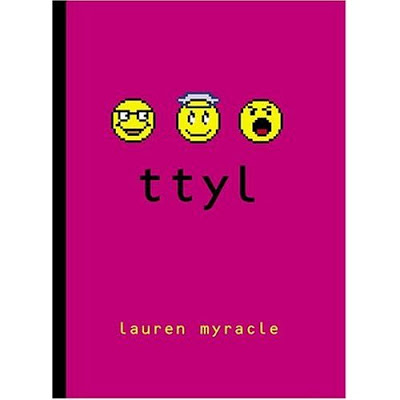 A teen novel that stirred controversy when the parent of a Round Rock student complained that it is obscene was removed from the district’s middle school libraries today.

The novel entitled “TTYL” by Lauren Myracle is a narrative in the format of instant messages exchanged among a group of teenage girls. TTYL is shorthand for “talk to you later.”

Round Rock Superintendent Jesus Chavez, sent a letter to Wes and Sherry Jennings on Tuesday saying he had determined that “while the book may be appropriate for some students, it is not appropriate for all of our students in the middle school and should not be made generally available in a middle school library open to all middle school students.”

“If parents wish their individual students to have access to the book, there are ample alternatives for the book to be made available to students at parent discretion,” the superintendent said in his letter.

Sherry Jennings, mother of a Ridgeview Middle School student, filed a complaint at the beginning of this school year after her daughter checked the novel out of the Ridgeview library.

Jennings said Tuesday, “We are extremely pleased that the superintendent is interested in quality education for our children and that he realizes that maturity-wise they are not ready for these types of books.”

Jennings said she objected not only to vulgar language in the book “but also to the sexual content of the entire book.”

Jennings said she and her husband are satisfied with Chavez’s response and plan no further action. She added that she appreciated the help of parents and others who supported her complaint about TTYL.

“We had 1,600 people sign a petition backing us, and about 10 people were very helpful in supporting us through this situation,” Jennings said.

Jennings was scheduled to appear before the school board to argue her complaint on Thursday after previous meetings with school officials proved unsatisfactory to her. Chavez said in the letter to her and her husband that since the book has been removed, the hearing before school trustees will be cancelled.

In late October, a nine-member committee appointed by Chavez decided by a 5 to 4 vote to keep the book on school library shelves. The committee included central administration officials, parents, teachers, and a high school student council member.

On Oct. 9, a six-member Ridgeview panel concluded the book should remain in the Ridgeview library despite the complaint.

3 Responses to Book Banning in Round Rock : Ta Ta to TTYL