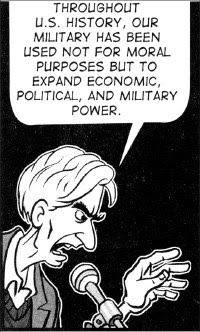 A People’s History of American Empire
By John Pietaro

A People’s History of American Empire brings the visionary writings of Howard Zinn to life. While Zinn has, in the past few decades, been accepted as the dean of left historians, co-author Paul Buhle has been making his own contributions to history, writing, or editing over 30 books that tell the tale of workers, artists, the blacklist, and resistance to it. Recently, Buhle has presented his people’s histories in book-length comic format. Successes with graphic histories of the IWW, SDS, and Emma Goldman led to a desire to do the same with A People’s History of the United States. Buhle took chunks of Zinn’s writings from it and added pieces of his life story, all of which became part of A People’s History of American Empire.

Editor Buhle developed this project with Zinn, labor cartoonist Mike Konopacki, and writer/unionist Dave Wagner. The book’s drawings, photos, and historic prints meld into a strong collaborative effort. The results are jarring. With all of the flair of a classic film, we are transported to a lecture hall bedecked with anti-war banners. The reader becomes witness to a Zinn speech which artfully explains the rise of the United States as an empire. Zinn stands at center stage. His humanity is as apparent as the urgency in his message, as his podium’s top reveals papers, a watch, a bottle of water. We observe from all angles including a birds-eye view.

Zinn’s voice looms large as the story of Wounded Knee unfolds. This 1890 tragedy where Native American families were slaughtered by U.S. Cavalry is illustrated in gory reality—particularly the grainy photograph of a slain chief lying frozen in the snow.

Like its predecessor, this People’s History should be a staple for teachers. The Monroe Doctrine, which sought to “protect American interests,” sounds eerily familiar, though enacted in the 1850s. Quotes from politicians and military leaders throw egg on the face of those who would hide behind a flag pin. “Third World” nations as U.S. pawns, humiliated and silenced native leadership—it’s an old story. The World Wars, Hiroshima, the Cold War, Civil Rights battles, Vietnam, Nixon, the hostage crisis, Reagan, Iran-Contra, Iraq, and George W. Bush as Nero all stink of the greed that created them. At strategic points, we are enlightened with “Zinnformation” frames where parallels are drawn between historic events and today’s injustices. While walking through history, brandish this tool to also reach across generations.

Find A People’s History of American Empire at Amazon.com.