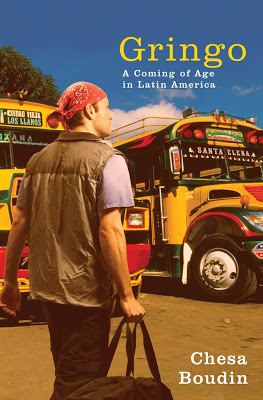 Chesa rarely if ever takes anything or anyone for granted, least of all his own privilege. He looks behind the scenes, asks difficult questions and gets underneath social pretense, hypocrisy and phoniness.

One-word book titles can pack a lot of wallop. Dick Gregory’s autobiography, Nigger, did, and so did Dalton Conley’s Honky, his memoir about growing up as a white boy in a largely black world in New York. Chesa Boudin’s Gringo conveys a lot of force in its one word title, too. The book itself often pulses along with the power of the Amazon, a river that the author explored on one of his many adventurers across Latin America. Yes, that’s an exaggeration, but the book calls for it. Part memoir, part reportage, Gringo offers a close look at life in Guatemala, Chile, Argentina, Brazil, Bolivia, Columbia, Ecuador and Venezuela.

In part, Chesa has followed in the footsteps of Che Guevara who traveled across the continent when he was a medical student, and wrote about his journey in The Motorcycle Diaries, a riveting story that was made into a movie. Since Chesa is a North American –- a “gringo” –- he inevitably sees South America through different, though no less valuable, eyes than Che’s. Like Che, he has the gift of empathy. He’s also a reliable journalist.

Chesa rarely if ever takes anything or anyone for granted, least of all his own privilege. He looks behind the scenes, asks difficult questions and gets underneath social pretense, hypocrisy and phoniness. Of the dangers of dogma, ideology and partisanship he is also well aware, but that awareness does not prevent him from reaching out to people he meets along the way, and getting to know them intimately well. He looks at himself and sees himself clearly as an individual, and also as a representative of the culture of which he is a part, and from which he is also in flight. Sometimes he seems too honest, too transparent and vulnerable. But he doesn’t cover up or dissemble.

The story of his birth in 1980, and his childhood, would make a book in and of itself. He tells the outline of the tale in Chapter Two, “Border Crossings.” His biological parents, Kathy Boudin and David Gilbert, took part in October 1981 in a bungled attempt to rob a Brinks Armored Vehicle carrying $1.6 million. Three people were killed. His parents were arrested and sentenced to 25 and 75 years in prison. Two of their friends, Bill Ayers and Bernardine Dohrn, took him into their family and became his parents. All that personal history he sometimes found difficult to convey to people he met in South America. Others seemed to grasp it immediately and to embrace him all the more readily because of it.

As a North American who lived in Mexico in 1975, along with Abbie Hoffman, who was in flight from the law, I was always conscious of being a “gringo,” and so was Abbie. Perhaps because we both had dark hair, dark eyes and olive complexions no one ever called us “gringos.” But that did not stop us from seeing ourselves that way and, though we tried to escape our identities as “gringos,” it was never easy. Chesa was called a “gringo,” sometimes affectionately, sometimes not. He knows the power of words like “gringo,” “nigger,” “honky” and “Yankee.” Sensitive to language, and to nuances of expression, he pays particular attention to the different ways Spanish is spoken in all the many places he visited, studied and worked. Sometimes he is a tourist; at other times he is a traveler, and on still other occasions, he is a later-day Beat voyager.

Jack Kerouac and Allen Ginsberg would recognize him instantly with his beard and backpack at the back of the bus. They would beckon him to join the Beat brotherhood of adventurers who wanted to get away from the American colossus, and to live side-by-side, in Mexico and in Morocco, with the “fellaheen,” as Kerouac always called them, by which he meant the lost, the lonely, and the dispossessed men, women and children of humanity who are everywhere in our midst. “Gringo” and “fellaheen”: they are world’s apart, and yet they are ever so close. Chesa Boudin brings them close together in his new and wonderful book about life on the road in this, our 21st century. 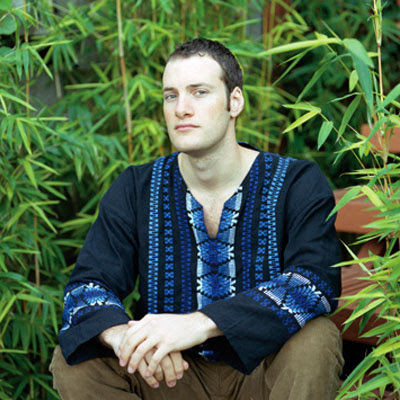 Chesa Boudin, author of Gringo: A Coming of Age in Latin America.
Dancing Into the World:
An Interview with Chesa Boudin

JR: With the name “Chesa,” I assume that it derives somehow from Che Guevara.

CB: Actually, Chesa comes from the Swahili verb Ku-Chesa that means to dance or to play. I was born feet first and my dad said it looked like I came dancing into the world.

JR: You have two dads and two moms, don’t you? How has that been to have two sets of parents?

CB: To their great credit it has mostly been double the love, double the support. Obviously there are aspects that are difficult but those are mostly related to the nature of maintaining relationships from the distance incarceration creates, not the reality of having two sets of parents.

JR: Your grandfather Leonard Boudin was a lawyer –- for the Cuban government, for a time. You’re in your second semester at Yale Law School. What’s next?

CB: I am not exactly sure, but maybe something to do with international human rights law. I’m also interested in labor and immigration.

JR: In your book Gringo in which you describe your travels from Guatemala to Ecuador, you say you have traveled to more than 80 countries.

CB: It’s up to more than 90 countries now, ever since I traveled from Istanbul to Shanghai by land from March to July 2008. I went from one side of Asia to another and I saw a lot of commonalities between countries that I had thought of as being totally cut off from each other. That was eye opening.

JR: You speak English and Spanish and what other languages?

CB: Portuguese, and I pick up other languages, too, when I travel.

JR: When I was growing up they called people like you “internationalists” or “world citizens.”

CB: Yes, I know those terms. Labels are complicated, and identity is so multidimensional. I suppose I see myself as a kind of travel expert.

I prefer land travel, and I like adventures on the road.

JR: What do you take with you when you travel?

CB: In 1999 when I went on my first solo trip out of the USA I had a cheap camera, a Walkman and sunglasses. I traveled with the idea that if I lost anything on the way I wouldn’t be upset. Recently I went with a friend who had a laptop, and that came in handy.

CB: I don’t. I write book reviews for Truth Dig and articles for The Nation.

JR: In Venezuela you worked for Hugo Chavez’s government. Are you now, or have you ever been a Chavista?

CB: I have criticisms of the Chavez government that the Chavistas don’t welcome. There is a lot of corruption in Venezuela and a lot of crime in the streets. The government has not made genuine progress in those two areas, and recently Chavez devoted a lot of time and energy to reforming the Constitution so he could stay in office longer, legally. I thought they should have spent more time developing new leadership.

JR: If Che Guevara were alive today how do you think he’d feel?

CB: He’d be excited about the possibilities for change all over Latin America. There has been a shift away from following the dictates of Washington D.C. and toward more independent leadership.

JR: Ought we to give Che himself credit for some of these positive changes?

CB: He’s an inspiration all over Latin America. In Bolivia people still talk about him. He did make strategic errors in Bolivia that led to his death.

JR: Would he be a guerrilla today?

CB: Well he’d be pretty old and it would be hard to survive in the jungle, though he was a tough fellow.

JR: Would he be an elder statesman and involved in a Latin American government?

CB: Democracy is being reinvented in Bolivia, Venezuela and elsewhere. Ecuador isn’t as far along in its own process but it’s coming along. All over the continent there is more grass roots participation in political movements than there has been for a very long time. Che gets some of the credit for that.

JR: Can you see a time when there might be guerrilla movements again?

CB: Right now there is no need for guerilla movements. If the masses of people are able to be included in the political process there will be less likelihood of guerrilla violence in the future.

CB: He is taking steps in the right direction. He just relaxed travel restrictions to Cuba, and that’s a good thing. That would have been unthinkable under Bush. But of course, the hard-line leftists in Latin America think he represents the imperialist state.

JR: Is the American Empire in crisis now?

CB: The financial meltdown is a sign of the crisis. And the shift in power in Latin America is another sign. Those things are evidence, I would say, that U.S imperialism is stressed. But at the same time I would have to say that it is an amazingly resilient system. The American Empire is not likely to collapse in your lifetime and perhaps not in mine either.

JR: What should we be doing here?

CB: Exerting leverage to create a political space so that the U.S. does the right thing in Latin America.

JR: Is there something I haven’t asked you that you’d like to say?

CB: I want to say that my book, Gringo, is political, and that it’s also personal: an adventure story. It’s about travel. I urge everyone out there to see the world for themselves and not watch it on TV. Go out and see and relate and experience the world. That’s what I try to do anyway.

JR: Sounds to me like you have been living up to the name Chesa; you’ve been dancing all around the world.

Find Gringo: A Coming of Age in Latin America by Chesa Boudin on Amazon.com.