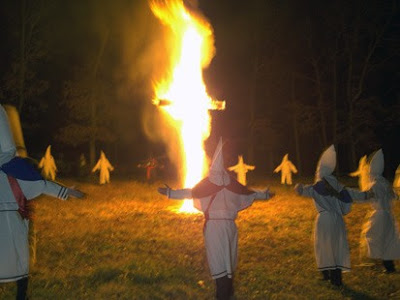 Klan cross burning. Could the fire next time be sooner than we think?

Homeland Security has issued an alarming report — alarming, at least, to those who haven’t been paying attention — that warns of further substantial growth in already resurgent right wing radicalism.

In light of the widespread reports of blatant racism, hate and calls to violence during Wednesday’s consistently mean-spirited “tea parties,” around the country, this warning should be taken very seriously.

Incidentally, this report has stirred up wide-eyed protest from Conservative quarters.

The Department of Homeland Security is warning law enforcement officials about a rise in “rightwing extremist activity,” saying the economic recession, the election of America’s first black president and the return of a few disgruntled war veterans could swell the ranks of white-power militias.

A footnote attached to the report by the Homeland Security Office of Intelligence and Analysis defines “rightwing extremism in the United States” as including not just racist or hate groups, but also groups that reject federal authority in favor of state or local authority.

“It may include groups and individuals that are dedicated to a single-issue, such as opposition to abortion or immigration,” the warning says.

The White House has distanced itself from the analysis. When asked for comment on its contents, White House spokesman Nick Shapiro said, “The President is focused not on politics but rather taking the steps necessary to protect all Americans from the threat of violence and terrorism regardless of its origins. He also believes those who serve represent the best of this country, and he will continue to ensure that our veterans receive the respect and benefits they have earned.”

The nine-page document was sent to police and sheriff’s departments across the United States on April 7 under the headline, “Rightwing Extremism: Current Economic and Political Climate Fueling Resurgence in Radicalization and Recruitment.”

It says the federal government “will be working with its state and local partners over the next several months” to gather information on “rightwing extremist activity in the United States.”

The joint federal-state activities will have “a particular emphasis” on the causes of “rightwing extremist radicalization.”

Homeland Security spokeswoman Sara Kuban said the report is one in an ongoing series of assessments by the department to “facilitate a greater understanding of the phenomenon of violent radicalization in the U.S.”

Go here to see the report in .pdf form.