BOOKS / Jonah Raskin on ‘The Bomb’ : Howard Zinn Speaks From the Dead 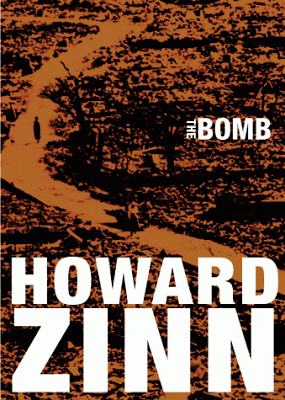 The Bomb:
Howard Zinn’s last call
To rebel against war

In his lifetime, Howard Zinn wrote and edited nearly two dozen books, and altered radically the way Americans view their own history with his best selling A Peoples’s History of the United States: 1492-Present. He was compassionate, dynamic, and an unrelenting seeker after justice, and when he died in January 2010, he was mourned by friends and family, students and activists, fellow historians and makers of history like himself.

Zinn seemed to do it all: think, act, organize, and agitate for more than half a century. A G.I., he was also a professor and an adviser to the Student Nonviolent Coordinating Committee (SNCC), as well as a critic of the Vietnam War.

In The Bomb, a new book forthcoming from City Lights, he tells the little-known story of his own experience as a bomber in the U. S. Air Force and his role in dropping bombs on Germany during World War II. Zinn also explains that he initially applauded the dropping of atomic bombs on Hiroshima and Nagasaki.

“So I wouldn’t be going to the Pacific, and might soon be coming home for good,” he thought when he saw a headline that read “Atom Bomb Dropped on Hiroshima.” Part history, part memoir, part sermon, The Bomb is meant to wake up citizens, to rouse them to reject “the abstractions of duty and obedience” and to refuse to heed the call of war.

It’s as though Zinn speaks from the dead one last time — to plead for individual responsibility. Perhaps in writing the book, which he finished just before his own death, he also laid to rest ghosts in his own life. The publication of the book coincides with the 65th anniversary of the U.S. bombing of Hiroshima and Nagasaki.

There are two parts to The Bomb. One of them has to do with Zinn’s own experiences bombing — and destroying — the French town of Royen in April 1945 three weeks before the end of the war in Europe, that resulted in the deaths of more than one thousand people. Zinn was a bombardier with the 490th Bomb Group and flying in a B-17 with the crew. “I remember distinctly seeing, from our great height, the bombs explode in the town, flaring like matches stuck in fog,” he writes. “I was completely unaware of the human chaos below.”

Twenty-one years later, Zinn returned to Royen to do research about the destruction of the seaside French town. And in 2010, 65 years later he was still haunted by the bombing, and his own role as a bombardier. What Zinn learned from his research was that in the bombing of Royan, napalm or “liquid fire” was used for the first time. He concludes that it was “an unnecessary military operation” and that Royan was bombed to fulfill “pride, military ambition, glory and honor.”

He also argues that the bombing of Hiroshima and Nagasaki were unnecessary to win the war against the Japanese. He presents evidence to show that the war was already won, and that the argument that the bombs saved hundreds of thousands of American lives was misleading at best.

For Zinn, the bombings of Hiroshima and Nagasaki were acts of terrorism, which he defines as “the indiscriminate use of violence against human beings for some political purpose.” The Japanese cities were bombed, he says, because the United States wanted to “show the world — especially the Soviet Union — its atomic weaponry.”

Zinn has collected an array of powerful quotations from U.S. presidents and generals that explode like bombshells in the pages of this book. “This is the greatest thing in history,” Truman boasted of the A bomb. General Curtis LeMay said during World War II, “There is no such thing as an innocent civilian.” During the Vietnam War, and speaking of the Vietnamese he said, “We will bomb them back to the Stone Age.”

Zinn has also included stories from Americans who were involved in the bombings of Japan, either directly or indirectly. Father George Zabelka, the chaplain to the crews that dropped the bombs on Hiroshima and Nagasaki, said, years later, “I never preached a single sermon against killing civilians…I was brainwashed.”

The Bomb is Zinn’s last confession. It’s his last sermon, and an account of the ways that he too was brainwashed during World War II. It’s a horrific story that he tells. He brings out the little known fact that American prisoners in Japan also died in the bombing of Hiroshima. A Japanese doctor saw their bodies a day later and said, “They had no faces! Their eyes, noses, and mouths had been burned away, and it looked like their ears had melted.”

The City Lights editor for this book, Greg Ruggiero, says that Zinn “loved small acts of rebellion.” The Bomb is his final act of rebellion. Zinn observes in The Bomb that, “rebellion is a rare phenomenon.” But he doesn’t leave it at that. He urges citizens “to interfere” both with the war machine and the “odd perversion of the natural that we call society” and to save human lives.

[Jonah Raskin is a professor at Sonoma State University and the author of The Mythology of Imperialism and Field Days.]

1 Response to BOOKS / Jonah Raskin on ‘The Bomb’ : Howard Zinn Speaks From the Dead