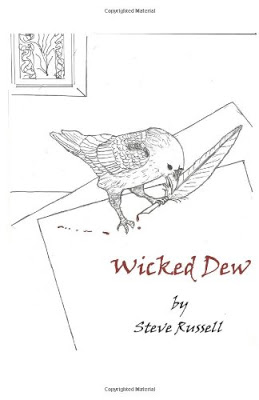 I’ve known Steve Russell since sometime in 1968 when he started showing up at The Rag office, a tall, gangly, very young Vietnam-era vet going to UT Austin on the GI Bill. Although Steve is incredibly bright and witty, and I’ve always enjoyed his prose contributions to The Rag and now The Rag Blog, I was nervous about reviewing his first book of poetry, Wicked Dew.

Steve is a Native American writer, and all of the previously published works in this collection have appeared in the Native press, where he is a regular contributor of weighty essays as well as occasional poetry. The book in fact won the 2008 Poetry First Book Award of the Native Writers Circle of the Americas (NWCA), and would have been published as part of the award; unfortunately, NWCA lost publication funding and the book is only now seeing the light of day.

I worried I might not be the right person to review poems that would obviously, just from these facts, be deeply rooted in Steve’s experience as a Native American. My mostly Scotch-Irish parentage undeniably has Native ancestors as well, but in my generation, and even in my folks’, as Russell writes in “Blood Quantum,” the “thin red line” of Native genes became gray oblivion.

My unfamiliarity with contemporary Native American literature (these days, honestly, with literature in general!) added to my concern. Would this blue-eyed daughter of “the flood of European blood” really get it?

I needn’t have worried, and neither should other poetry lovers. While a deeper knowledge of Native American literature would no doubt add to the grasp and enjoyment of these 37 poems, most transcend ethnic or tribal viewpoints, offering windows into the transformation of a poor “halfbreed” Oklahoma dropout into a multifaceted human rights activist and whole human being, rooted in and proud of his heritage.

“Heritage” for Steve is, I think, not just who someone’s ancestors were or what they did, but what a person makes of it. He writes his own history, and defines his own family, too. 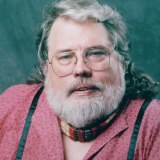 Here are no paeans to Native purity or essential nobility. Only the lovely “Haiku for Walela” hearkens back before the European flood hit the Western hemisphere. One rather cynical poem, “Teach Me,” begins, “Teach me, White Father, so I may understand. I understand slavery…” Slavery — although not of the lifelong variety — was commonly practiced among Native tribes long before there was any European contact. Of these critical looks at Native political correctness, the most powerful is “How to Succeed as an Indian Poet”:

Don’t say ‘hunger.’
Write of the plump red strawberries
grown by Cherokees
in the Cookson Hills,
rather than rodents fried in lard,
garnished with herbs from the bar ditch,
government commodities on the side…
In “Probably Wolf Clan,” “Indistinguishable Color,” “Blood Quantum,” and other poems, Russell mourns the ongoing loss of Native identity and weighs his own. The question of who is “red” enough to be a “real Indian” has parallels in other discussions: is Barack Obama a “real black man?” What does it mean to be “Hispanic” or “Latino?” And for goodness sake, what in the world is “white?” “When I’m Old” begins:
And when I am very old
will the drums outrun my feet?
Will the sweetgrass be just another smoke, and the sage a burning weed?
Does White Buffalo Calf Woman return for the civilized Indians?
A few selections distill the “wicked dew” of the title and cover illustration, inking the perfidy of European America in its true colors of bitterness and gall. “Bison Bones” excoriates oblivious conquerors who do not even know what they desecrate:
Were Dallas Texans born with neckties on
to be served in deep carpet
by smiling brown faces
where dishes disappear silently
and condiments come in tiny sealed jars
to dine on bison bones?
In other poems, Russell celebrates Native cultural values. “Disruption, Spring 1997,” based on news accounts of an Albuquerque school girl not allowed to graduate wearing a traditional shawl by her grandmother, tells of family pride in the girl’s achievement. Poems for two of Steve’s (non-simultaneous) wives and one titled “Lust” are lit from within by wise acceptance of what-it-is. Another, “Cherokee Love,” begins:
There is no love in Cherokee.
No falling in or falling out,
no marry now or live in doubt,
no changing weather love in Cherokee…
Some selections are rooted in Steve’s activism as part of Austin’s late 1960s-early 1970s anti-war movement. “Jailpoem 2,” from 1970, was clearly written following angry protests of the U.S. invasion of Cambodia and massacres of students at Kent State and Jackson State. Steve became a leader in the Austin chapter of Vietnam Veterans Against the War. 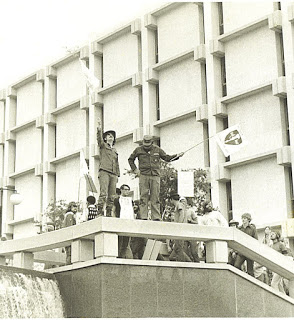 Steve Russell, front with VVAW flag, participates in a demonstration by Vietnam Veterans Against the War on the University of Texas Campus at Austin in the late Sixties. Photo from Mariann Wizard’s files.
“At the Vietnam Veterans Memorial” alternates flashbacks of a Southeast Asian village, a horse cavalry massacre in an Arapaho village, and tears for the fallen soldiers memorialized on the Wall. “Seeing Off the Troop Train” contrasts his youthful desire for heroic action with his grandmother’s wisdom and his own fears as a father:
Twenty-eight years later, my son is a volunteer soldier.
Nobody elected Bush or his crew of 20th century retreads.
Granma is not here to say ‘We got no business over there!’
But I hear her anyway.
Not everything is equally successful. “Not Juan Valdez,” a clever idea, is marred by Spanish spelling errors and the misplacement of Colombia’s iconic coffee grower to the Mexican state of Chiapas. Not Juan Valdez, indeed; this one confuses the reader and thus loses points.

A few poems with long, complex lines push against the borders of the printed page, seeming to demand spoken performance and perhaps hand drum punctuation, but add to the depth of the collection overall.

Wicked Dew charts a vision of optimism, traditional values, and endurance in selections such as “Indian Lawyer’s Creed” and “A Matter of Faith.” “To My Grandfather,” the initial poem in the collection, is perhaps the most revealing of these:

I told him I wanted to be like Mickey Mantle,
who escaped the poverty of rural Oklahoma,
and appeared to own New York,
a grand place located near Oz…

I left Oklahoma
and as the years accumulate
Oklahoma almost leaves me.
The road home is distant and dusty and even more unlikely
than the road here…

I have seen New York.
And Oz.
And College…

And although I still cannot tie a necktie, Grampa,
I have taken your name…

and I want you to know
I am still playing batter.
Retired from a first career as an Austin and then Travis County, Texas, trial judge, and a second as a professor of criminal justice in San Antonio and later at Indiana University, and with a book of essays also just out (Ceremonies of Innocence: Essays from the Indian Wars, 2012, Dog Iron Press), Steve Russell bats close to a thousand with this collection of verse.