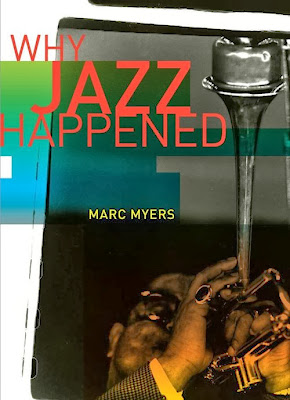 ‘Jazz, man, that’s where I’m at’:
Chronicling the history of America’s music

Myers provides the reader with a deep, rich, and broad perspective on the confluence of jazz and U.S. history in the decades following World War Two.

After a very brief introduction, Walt Myers begins his history of jazz music with the bebop era. Charlie Parker’s saxophone floats in the background as he sets the background for a unique look at the economic, cultural, and even political circumstances of the last 70 or so years of jazz in the United States.

Truman Capote once called the writing of Jack Kerouac “typing, not writing.” A similar mindset met the advent of bebop in the 1940s. This snobbery came from a misunderstanding of the improvisation Beat writing and bebop insisted on. Within a decade, however, bebop had replaced the Big Band swing sound as the dominant force in the music.

Why Jazz Happened details this transformation. There are a multitude of details between the covers of this book. These details require a quality writer to arrange them and make a readable story. Myers performs that task nobly. In doing so, he provides the reader with a deep, rich, and broad perspective on the confluence of jazz and U.S. history in the decades following World War Two.

It may be difficult for anyone who first began listening to music on the radio in the 1960s to believe that jazz was at one time a popular and bestselling musical form. Indeed, concerts by swing band masters like Benny Goodman and shows by masters of the solo instrument like Charlie Parker were the mid-twentieth century equivalent to today’s hip-hop and rock artists. When the phonograph became affordable and the vinyl record common, the popularity of the form grew even greater.

Myers relates the intriguing story of the relationships between jazz artists, producers, electronics corporations, and the recording trade. He tosses into that mix the struggles of composers and performers in gaining compensation for their works and the growth of the musicians’ union. In his telling, the reader gains an understanding of the nature of art in an economy rapidly becoming corporatized, with the accompanying contradiction of simultaneous compartmentalization and centralization monopoly capitalism demands.

Advances in technology did more than enhance accessibility to the music and increase sales. It also changed the music itself. Instead of short solos made for a three minute song — a virtual necessity on the shellac 78 RPM discs in existence at the beginning of reproducible music — the advent of the 33⅓ RPM LP enabled producers to lay down extended solos.

Given the nature of bebop, which is defined by long solos by individual band members, the LP provided thousands more jazz listeners with an opportunity to hear their favorite ensembles and soloists. This popularized the music yet also removed its avant-garde allure. Now, anyone with a record player had the potential to be hip.

The downside to the development of vinyl records for jazz music and musicians, especially the shorter playing 45 RPM variety, was that record companies began to record other genres of music that were less established in the industry. This was done in part because many of these artists were less aware of the economic possibilities of the format and therefore easier to exploit.

Indeed, one could reasonably argue that it was the 45 RPM record that popularized both rhythm and blues and rock and roll. Both genres depended on a catchy hook and the songs usually ran less than three minutes each. As anyone who grew up listening to 45s knows, this format was perfect for those little round pieces of plastic with big holes in the middle.

In today’s world of Mp3s, downloading, ITunes, and Bittorrent, the pages Myers devotes to discussing artists’ attempts to gain control over the rights to their work takes on added interest. The story of musicians fighting to make money from other artists performing their works is a long one. It is also one that seems to contain more victories for the corporations that control music publishing and recording than victories for the artists.

The creation of the American Society of Composers, Authors and Publishers (ASCAP) in 1914 was the beginning of an organized attempt to distribute the royalties from such performances. Its enhancement in the 1930s and 1940s created a stalemate between the industry and the Musicians Union that was resolved when one record company acceded to the union’s demands, thereby forcing the other corporations involved to do the same or rsik losing their stable of artists to another company.

The incorporation of the Recording Industry Association of America (RIAA) in 1952 added another layer of accountability to the process, albeit one that took a slightly more industry-favorable position than either ASCAP or the union.

Never lost in the story’s telling by Myers are the changes in the music. He chronicles the history of postwar jazz from its bebop and swing roots to the smooth sounds of West Coast jazz to hard bop and into the fusion sounds of the late 1960s and 1970s. In between, he tells the story of avant-garde jazz and its modern music influences from returning GI musicians studying atonal composition and modern classical in university music departments on the GI Bill.

He also discusses the changes wrought by rock music’s British invasion and Berry Gordy’s softer R&B that became known as soul music. The cultural revolution of the 1960s, whether it was the fury and fight for justice boiling up in Black America or the psychedelic brew being mixed in the counterculture of America’s youth, influenced the direction jazz would take, as well.

Myers touches on them all to create a detailed, well-researched and readable history of the essential musical form of the United States.

Why Jazz Happened is a book for anyone interested in jazz music. This history penned by Marc Myers places jazz within the cultural, technological, and economic currents of the period covered. The writing is fluid and accessible. Myers provides a complex story of a cultural phenomenon where the context is more than incidental.

Not only will readers understand jazz music on a deeper level after reading this book, they will also better understand the history of the United States after World War Two.