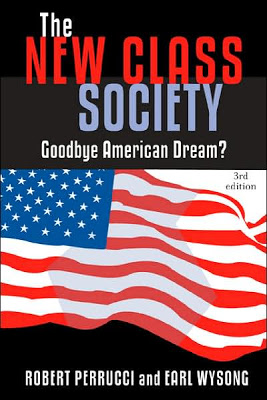 I am using a text by Robert Perrucci and Earl Wysong called New Class Society: Goodbye American Dream? (Rowman and Littlefield, 2008) in a course called “The Politics of Capital and Labor.” The authors review and synthesize a variety of definitions of class from political theory and sociology.

Their answer to the question of what is class draws upon Marxian notions of relations of production, Max Weber’s ideas about persons in various organizational positions, and the more conventional view of class as relating to the distribution of income, wealth, and power.

Using data reflecting their synthetic definition of class, the authors conclude that the portrait of a U.S. class system consisting of a small ruling class, a large “middle class,” and a small percentage of economically and politically marginalized people is no longer an accurate way to describe society. The class system of the days of relative prosperity from the 1940s until the late 1960s, which looked like a diamond with a broad middle, has become like a class system looking like a “double diamond.”

In this new class society, the first diamond, the top one, consists of the “privileged class” composed of a “super-class,” “credentialed class managers,” and “professionals.” All together these representatives of privilege constitute about 20 percent of the population. All the others constitute a “new working class,” some living in relative comfort but most engaged in wage labor, modest self-employment, or part-time work. This is the second diamond representing 80 percent of the population.

Students in my course have been debating some of the formulations but certain elements of the text have been uniformly accepted by them. First, everyone seems to accept the double-diamond metaphor as a way of conceptualizing the distribution of wealth, income, and power.

Those in the top diamond representing privilege are relatively assured that their sources of income and wealth are permanent. Their sustenance and family stability are assured while the other 80 percent, the model suggests, live economically marginal existences and in conditions of precariousness.

My students raise no objections about what Perrucci and Wysong regard as broadly accepted features of this new class system.

First, since the 1970s, there has been increasing class polarization. Gaps in distributions of wealth and income have grown. Real wages of workers have stagnated since the 1970s. In addition, workplace benefits have declined, including pensions. Permanent jobs have been replaced by contingent labor. The percentage of unionization of the work force has declined by two-thirds.

The authors cite a recent study that estimates that only one-fourth of jobs today are “good jobs,” paying at least $16 an hour. And, on the other hand, the share of income and wealth accumulated by the top one percent or 10 percent or 20 percent, the entire privileged class, has risen. The rich have gotten richer while the poor poorer.

Second, since the 1980s, workers and their families have experienced downward mobility, that is their social and economic position has declined. This has occurred because stable, well paying jobs have disappeared due to outsourcing, capital flight, and deindustrialization. By any number of measures, the “American Dream” of helping one’s children to move up the status ladder has been reversed.

Third, the increasing accumulation of wealth and power through tax cuts, deregulation of financialization, and declining government support for public services have encouraged the privileged to embark on class secession.

Increasingly, the authors suggest, the privileged class withdraws its support for public institutions as it funds its own private schools, libraries, recreational facilities, and additional social services. The rich build gated communities, electrify their fences, hire private guards to protect themselves, and create private institutions to replace public ones.

The authors refer to Robert Reich’s “secession of the successful” which they say “combines traditional forms of physical and social separation and increasing numbers of privately provided services with the ideology of neoliberalism, an idea system of free market fundamentalism that encourages and legitimates hostility to public institutions.” They conclude that “class secession today involves both a separatist social identity and a conscious secessionistic mentality.”

The findings reported in The New Class Society about class in America are profound. Long-term trends in the United States since the 1970s have led to growing wealth and power at one pole and increasing immiseration at the other pole. The idea of a broad middle class is further away from reality than ever.

For the vast majority of Americans economic security is declining. And, most important, the privileged class, which has built its wealth and power on the growing immiseration of the new working class, is physically, financially, and ideologically seceding from the system that historically claimed to provide at least some institutional support for enrichment of the citizenry at large.

The authors also present data to show how the brutality of the new class society particularly impacts on people of color, women, immigrants, and other traditionally marginalized people.

While the task of my course is to study the underlying fundamental features of American society, particularly those bearing on political economy, the implications of this analysis for practical political work seem obvious.

First, progressives need to “make class analysis relevant to our organizing.” This includes educating ourselves and those we work with about the ways in which society is divided into classes based upon how people are related to the workplace, the status and power of workers in different organizational positions, the distribution of wealth and income in society and the history of class in America.

Our educational work must show how class relates to race, gender and the environment. In the end we must construct a compelling vision for the abolition of our class divided society.

Second, progressives must articulate in every political setting those experiences of class that vast majorities of the people share.

Years ago Harry Braverman, in Labor and Monopoly Capital demonstrated that work was being transformed by the capitalist system; that patterns of control of the minds and actions of workers were being increasingly controlled by a deepening division of labor, and that the work process, whether white collar or blue collar, service or manufacturing, was being homogenized. He and others called this process of work transformation, “proletarianization.”

This historic development argues for a political strategy that prioritizes education about the growing commonality of work experience of those in the bottom 80 percent of the work force.

Third, progressives must articulate programs of education and action that seek to deepen understanding of barriers to solidarity resulting from race, gender, and even political ideology. Progressives must be more mindful of the different experiences of class in America, such as the historic role of slavery and immigrant labor, super-exploitation of African Americans and women, and ethnic discrimination.

The articulation of the different experiences of class through race and gender should be used to broaden understanding of how those differences were used to increase class exploitation of all those in the majority.

Fourth, progressives should began to analyze the ways in which many of the new right wing “tea party” activists share a common experience of class. Education and advocacy must more clearly be based upon an understanding of the common interests privileged class Republicans and Democrats share and the reality of interests shared by the new working class majority.

In the end there is no substitute for building what activists used to call “class consciousness.” The realities of class exploitation, as Perrucci and Wysong suggest, seem more obvious than ever. They just need to become a central element of our political discourse.