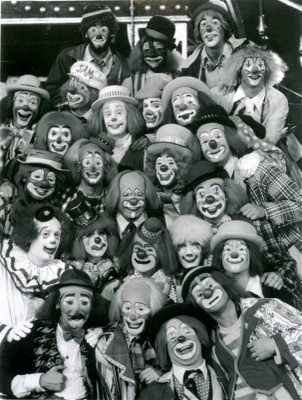 The Secure Border Fence Act passed in 2006, but the Department of Homeland Security only just realized that the homeland has an international water treaty with Mexico that prohibits the building of fences in the Rio Grande Valley’s floodplain.

DHS’ solution? A movable fence, of course. Can’t wait to see which private company gets the fat contract to move the fence before major flooding events. The more I read, the more I expect a Volkswagen to pull up with 17 clowns and Michael Chertoff crammed inside. Would anyone be surprised?

DHS is supposed to start building the border wall on top of existing levees — themselves long overdue for repairs — during the heart of this summer’s hurricane season. After the disaster in New Orleans, it boggles the mind that Hidalgo County officials have to fly to D.C. and beg for federal funding to repair their federal levees before a major flooding disaster occurs.

DHS has also proposed movable fencing along Arizona’s San Pedro River. Since the Congressional Research Office estimated $49 billion for 700 miles of border fence, then it’s reasonable to expect that movable fencing will cost taxpayers even more. Plus, the government will need to pay someone to move the fencing when disaster looms. Sounds like whoever gets the contract will also deserve hazard pay — add that to the nation’s already-bloated border security costs.

Wouldn’t it have made more sense, and cost U.S. taxpayers a lot less money, if DHS had simply consulted with border residents and border officials first? If they had asked (or listened to) groups like the Texas Border Coalition? Chertoff might have learned that eliminating salt cedar and Carrizo cane from the Rio Grande, expanding the river channel, adding more Border Patrol agents and employing virtual-fence technology (provided it works) might actually secure the border better. And how about comprehensive immigration reform?

Then again, maybe not. Where are the no-bid contracts in that?