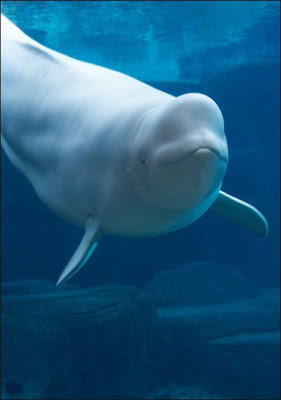 A Beluga whale swims underwater in the Arctic region. What happens to the Beluga population reflects the effects global warming on the Arctic ecosystem, says Vsevolod Belkovich, a professor at the Russian Academy of Science who is leading a study on the whales. Photo from Getty Images.
Whale Playground Sheds Light on Melting Arctic
By Conor Humphries / July 24, 2008

A young whale pokes its melon-shaped head into the cool morning air near this remote island, a sign its herd is thriving despite mounting threats in Russia’s melting Arctic.

Cameras and microphones capture the whale’s every move as scientists use the species’ only shore-side breeding ground to see how they are coping as fleets of oil tankers replace melting ice in their traditional feeding grounds.

“Belugas are a bellwether species…what happens to them reflects the effects of pollution and global warming on the whole ecosystem,” said Vsevolod Belkovich, a professor at the Russian Academy of Science who is leading the study.

Scientists have recorded a small drop in the whale population that they attribute in part to human activity in Arctic regions. “As global warming continues, the threats are going to grow dramatically,” Belkovich said.

Since monitoring began scores of whales have traveled hundreds of miles each year to this White Sea sandbank to mate, frolic and train their young.

Distinctive markings on the whales’ backs allow the researchers to track the population from year to year, monitoring their health, longevity and interactions with rival herds.

“It’s the only place in the world they come so close to the shore,” said Vladimir Baranov, a senior researcher with Moscow’s Institute of Oceanology, who films the Belugas close up underwater in their natural setting.

“They can play here because there is no danger,” said Olga Kirilova, a fellow researcher. “But in the winter they go north and face intensive shipping, the tankers and their pollution.”

With the melting of ice sheets in the Arctic, the Russian government has set the development of rich oil and gas reserves in the region as a priority, including fields in the Barents Sea where many of the Belugas spend the winter.

The volume of oil transported through the Barents Sea — part of the Arctic Ocean — has soared in less than decade from almost zero to 10 million tons, according to a study by the Norwegian funded Barents Secretariat.

Within a decade it could hit 150 million tons, the study said.

While the noise of the tankers is recognized as a major problem for the whales, who use sound to navigate, the biggest danger is the threat of a spill that could take years to clear.

It took the White Sea ecosystem over five years to overcome the effects of a small spill in 2003, Belkovich said.

A five percent fall in the White Sea Beluga population registered in recent years suggests the development is beginning to have an effect. But researchers fear much worse is to come.

The International Fund for Animal Welfare (IFAW), which is financing the research, cites the example of the Harp seal, which like the Beluga migrates between the White Sea and the Barents Sea.

Global warming and increased ship traffic in the White Sea have together robbed the Harp seal of the ice sheets where pups are born, causing a collapse in its population from 300,000 in 2003 to just over 100,000 in 2008, IFAW said.

While the Belugas are less dependent on ice, they are very sensitive to any pollution that the oil industry brings, said researcher Vera Krasnova.

“In the Saint Lawrence River in Canada, pollution has been catastrophic for the Belugas,” she said. “The same could happen here.”