BORRRRING : Republicans Just Can’t Get it Up for Convention 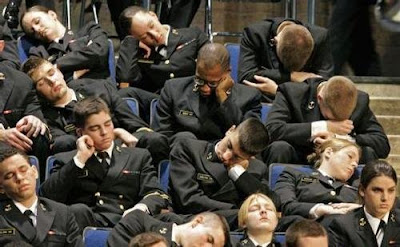 Enthusiasm gap: All the excitement’s in Denver
By Richard T. Cullen / August 11, 2008

While excitement is building for a Democratic Party convention capped by Barack Obama’s historic acceptance speech before a sold-out, 75,000-seat football stadium, the GOP convention the following week is shaping up to be a considerably more staid affair, marked by the conspicuous absence of many of the usual convention attendees.

Republicans aren’t exactly planning to avoid the convention in droves. But compared to past conventions, lawmakers, lobbyists and candidates aren’t beating a path to St. Paul either.

Of the 12 Republicans running in competitive Senate races — five of whom are incumbents — only three have said they will be attending the convention. Six are definite no-shows, and three are on the fence.

“Nobody likes a funeral,” said a Senate Republican press secretary who spoke on the condition of anonymity, citing “the overall climate of general malaise about the party” as the reason for hesitance on the part of Republicans.

On the House side, according to a report in The Hill, during a July 31 conference call National Republican Campaign Committee Chairman Tom Cole of Oklahoma discouraged congressional hopefuls from attending, saying that doing so would potentially be a “waste of time.”

At least a handful of Republican incumbents, ranging from vulnerable incumbents such as Jon C. Porter and Dean Heller, both of Nevada, to safe veteran members such as Jim Sensenbrenner Jr. of Wisconsin and Sue Myrick of North Carolina, have also decided to stay home this year.

“While the congressman believes spending time with the delegates and the party faithful is productive, he is focused on campaigning in his district and ensuring that we keep Nevada red,” said Matt Leffingwell, Porter’s press secretary.

The political environment is just one explanation behind the absence of convention fever. Many GOP lobbyists also have decided the convention isn’t worth the trip — despite the seemingly limitless networking and schmoozing opportunities — in part because of logistics and location.

In 2004, D.C.-based conventioneers could zip in and out of New York City by train. The 2000 convention in Philadelphia was an even shorter ride.

St. Paul, by contrast, requires a flight halfway across the country from Washington — and, of course, the maddening hassle of air travel. The convention dates aren’t great either because opening day falls on Labor Day, which for parents marks the beginning of the school year.

That’s asking a lot of attendees, some of whom question whether, as a destination, the Twin Cities will be worth the aggravation.

“I would definitely say that people aren’t as excited about going to Minneapolis as they were about going to New York City,” said Matthew Keelen, president of the Keelen Group, a D.C.-based lobbying firm. “Minneapolis is a nice city, but it doesn’t quite have the environment and reputation of a New York City, and I think 2004 was a unique convention and a lot of it had to do with where it was,” he said.

“Overall, Republicans have an intensity problem,” added a top Republican lobbyist who requested anonymity. “I have a lot of friends that are just not going that have gone in years past.”

One Republican lobbyist interviewed by Politico said that of all the Republicans in his firm, only half were attending this year’s convention.

The lack of enthusiasm has been a source of frustration for venue owners close to the convention hall at the Xcel Center. Some of them were struggling until recently to meet their reservation expectations .

“We certainly weren’t alone, a lot of venues hadn’t heard anything and were kind of wondering what might of happened,” said David Miller, general manager of the St. Paul Hotel.

Republicans aren’t the only ones who appear less than passionate about their national convention. TV One, a new cable network aimed at African-American viewers, plans to cover the Democratic convention but not the GOP’s.

Rock the Vote, a nonpartisan group that strives to promote youth involvement in the political process, has an elaborate “Ballot Bash” fundraiser scheduled in Denver, which features, according the group’s website, “a live concert featuring exclusive performances and collaborations by marquee artists” in addition to an after-party of “world class DJ’s VIPS and celebrity guests.”

But for the GOP convention, Rock the Vote has more modest aspirations, featuring a “Premier Women’s Event: Political Chicks A Go Go,” sponsored by Lifetime television network and Right Now! with no notable music acts or VIPs.

“As of right now there’s not an equal amount [of events] but we’re working to get it that way,” said Rock the Vote spokeswoman Stephanie Young, who cited “space issues” as part of the reason for the disparity.

Regardless, the Republican National Committee says the level of excitement will be parallel to that of past conventions.

“We’re confident that we’re going to have a great national convention with enthusiastic participation from Republicans nationwide who are working hard every day to elect John McCain in November,” said Amber Wilkerson, an RNC spokeswoman.

Several of the Republicans interviewed contended that the goal isn’t necessarily to compete with the Democratic convention.

“We’re not having a rock concert at a stadium, but yet Republicans are looking at good polling data right now, they’re looking at a candidate who’s getting his sea legs right now,” said Edward Kutler, a Republican lobbyist for Clark and Weinstock. “I really think there is growing enthusiasm about what John McCain is doing and saying.”