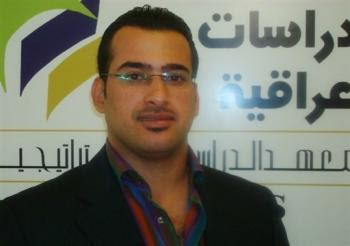 Muntazer al-Zaidi risks a miminum of two years in prison for insulting a visiting head of state. Photo by AFP.

Brother says Bush shoe-thrower in hospital after beating: ‘He has been taken to Ibn Sina hospital because he has a broken arm and ribs and is also suffering injuries to his eye and leg.’

BAGHDAD — The Iraqi journalist who hurled shoes at US President George W. Bush is in hospital after being beaten up by security guards, his brother charged on Tuesday, as judicial authorities launched a probe into the incident that grabbed headlines around the world.

“He has been taken to Ibn Sina hospital because he has a broken arm and ribs and is also suffering injuries to his eye and leg,” Durgham al-Zaidi said of his brother Muntazer.

The 29-year-old Muntazer al-Zaidi became an instant star in the Arab world when he threw his shoes at Bush on Sunday during the US leader’s farewell visit to the country invaded by American forces in 2003.

Zaidi, a journalist for private Iraqi television channel Al-Baghdadia, was swiftly overpowered by Iraqi security forces after his action, regarded as the supreme mark of disrespect in the Muslim world.

His brother charged that Zaidi had been beaten by Iraqi security guards but was unable to say whether Muntazer had sustained the injuries while being overpowered during Sunday’s protest or while in custody.

He said he had been told that his brother was initially held by Iraqi forces in the Green Zone where the US embassy and most government offices are housed. The Ibn Sina hospital, which is run by American military medical services, is also inside the zone.

An AFP journalist said blood was visible on the ground as he was led away into custody on Sunday although it was unclear if it was his.

“Muntazer al-Zaidi has been transferred to the judicial authorities who have opened an investigation. But it is too soon to say who was behind this act,” General Qassem Atta, spokesman for a Baghdad security plan, told AFP.

Bush, who was on a swansong visit to the battleground that came to dominate his eight-year presidency, ducked when the shoes were thrown and later made light of the incident.

Zaidi’s action won him widespread plaudits in the Arab world where Bush’s policies have drawn broad hostility, although Iraqi reaction was mixed.

In parliament, Baha al-Araji, an MP with the Shiite movement headed by radical anti-American cleric Moqtada al-Sadr, demanded an inquiry into the “brutality” of the security guards.

But Sami al-Askari, a Shiite lawmaker close to Prime Minsiter Nuri al-Maliki, lashed out at Zaidi for what he branded a “shameful act which sullies the reputation of the media.”

An Iraqi lawyer said Zaidi risks a minimum of two years in prison if he is successfully prosecuted for insulting a visiting head of state.

In Gaza, around 20 Palestinian gunmen from the Popular Resistance Committees, a hardline militant group behind a spate of rocket attacks on Israel in recent weeks, staged a demonstration in support of Zaidi.

Wearing fatigues and brandishing Kalashnikov assault rifles, they stamped on photographs of the US president and held banners in support of the journalist.

The pro-government Al-Sabah expressed concern about the potential impact on press freedom of what it called Zaidi’s “abnormal individual behaviour.”

But the independent Al-Dustur hailed the journalist as the “only Iraqi whose patriotic feelings made him express his opinion in this way.”

“It is not a declaration by the Iraqi media only, but for all Iraqis who have suffered over the years and we demand that he not be handed over to US forces,” the paper said.

Lebanese television channel NTV, known for its opposition to Washington, went as far as offering a job to the journalist, saying he would be paid “from the moment the first shoe was thrown”.

“Pelting the American president with shoes was the best way for expressing what Iraqis and Arabs feel toward Bush,” wrote the editor of Egypt’s government owned Al-Gomhuria newspaper.