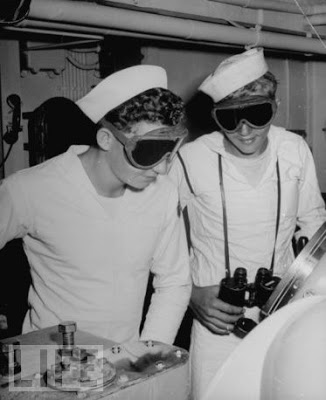 Sailers in 1946 are shown wearing goggles to shield their eyes from an atomic blast. Dr. Phil Trapp told about how such goggles were expected to protect his World War II Marine flotilla from the effects of a third atomic bomb to be dropped on the beach just ahead of them. Dumb luck saved them. Photo by Bob Landry / Life Magazine.
(And a whole row of ‘had’s…)
Luck, and dumb luck

DURHAM, Arkansas — I ran across a note that had been lost for some time and I want to share its content. The note has nothing to do with politics, war, or anything but English grammar. It is a sentence that contains 11 “had”s in a row, and it is perfectly correct.

When George visited us years ago, Nancy mentioned several things so I would notice them. When her father was sitting in a chair with his head nodding, he wasn’t asleep, he was thinking. He would take out a small notebook from his pocket and write in it. I was told not to ask what he was writing because I wouldn’t understand it. It was to himself. When he would later communicate, you would understand, like WordNet 2.1. You can find it with your computer and download it. It’s free and very useful.

There have been another two disasters and a near disaster recently affecting our country. The oil blowout in the Gulf of Mexico, Nashville under water, and a car bomb in Times Square. We watched CNN for news on these disasters.

Actually, I rather think the real disaster in the bomb scene was the character who built the “bomb.” Faisal Shahzad, a naturalized American, had it all worked out. He had placed a vehicle where an explosion would have caused destruction of property and many casualties. His explosives were amateurish at best. But he had transportation to JFK International Airport.

There was an announcement by some government agency representative extolling the various groups involved and how alert they were. Homeland Security had all of the bus stations at the Port Authority covered, but at JFK, Shahzad got through security. That pretty much put the wraps on those characters as the heroes in this made-for-TV drama in which, just as the villain is about to escape, somebody notices that he is on a plane. I can hear the dramatic music build, until the plane is called back to the gate. I suppose it was TSA who went on board and trundled Mr. Shahzad off to be interrogated.

Then the story changed. It seems he only got through security once and hadn’t been on the plane after all. The plane was called back because there were “suspected accomplices” on board. I suppose they looked Middle Eastern, which is racial profiling and only permitted in Arizona.

As I have continued watching and listening to the news I have come to a conclusion. It seems that all of the agencies involved were working together. That’s good. But it’s not so much that they were smarter than the bomber, as that they were very lucky. This guy was just plain dumb.

Luck reminded me of something a friend of ours wrote and I dug it out of one of the many piles of papers around the house. Dr. Phil Trapp is Emeritus Professor of Psychology from the University of Arkansas. He wrote a letter to the Northwest Arkansas Times in 2007 in which he gave some examples of “dumb luck.”

In World War II he commanded a flotilla of landing craft destined to invade Japan. They were to invade right after a third Atomic Bomb was “dropped on the beach just ahead of” them. They were to wear goggles to protect them from the “brilliant light” of the bomb. Nobody back then knew about radiation fallout. Fortunately Japan surrendered before the invasion.

Another example he gives of “dumb luck” is the chlorine compound in aerosols and car air conditioners being discontinued before the ozone layer was completely destroyed. Professor Trapp also commanded Marine landing craft at Red Beach on Iwo Jima Island. He survived. And that was really luck.

We can’t count on luck, but we can remember (if our attention spans aren’t too short) the words of the man who alerted police to the suspicious SUV in Times Square. He was a street vendor and disabled Vietnam War veteran who sold T-shirts. When asked what he had to say about the event, he replied, “If you see something, say something.” He saw something different and said something for sure. He told a police officer and thus the comedy began. In the classical sense, comedies all have happy endings. This one did. And a clown for the central character.