BushCo: Keeping Up the Secrecy and Corruption

As Chris Brown, blogging on Political Base, points out, “Paulson and the Bush administration clearly want to mask previous illegal activity and prevent any oversight and accountability. But we’ve seen this type of secrecy and corruption from the Bush administration before. Goldman fared well during Paulson’s tenure as CEO. He also reaped a hefty compensation package at Goldman. In 2005, Paulson received $38 Million in compensation.” Seems pretty clear that there is a conflict of interest here, but BushCo forges ahead, ensuring their pockets are well-lined while the rest of us are hung out to dry. 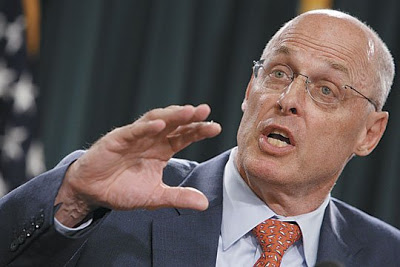 WASHINGTON — Making the rounds on the Sunday morning talk shows, Treasury Secretary Henry Paulson repeatedly said today’s financial problems were long in the making. He should know. He was part of the Gold Rush that has brought the global financial system to the brink of collapse.

Paulson presided over one of the most profitable runs on Wall Street as chairman and chief executive officer of investment banking titan Goldman Sachs & Co. from 1999 until President Bush nominated him on May 30, 2006 to take over the Treasury Department.

Back then, Bush saw Paulson’s Wall Street experience as a plus. “Hank will follow in the footsteps of Alexander Hamilton and other distinguished Treasury secretaries who used their talents and wisdom to strengthen our financial markets and expand the reach of the American Dream,” Bush said at the time.

But with Paulson now seeking virtually unfettered authority to administer the largest bailout of the financial industry in U.S. history, many are wondering whether Paulson also doesn’t come with enormous potential conflicts of interest.

That was one reason Democrats on Sunday expressed reluctance to approve the administration’s draft legislation that would leave to Paulson virtually all authority over the proposed $700 billion bailout. The legislation would allow him to decide which securities to buy, from whom to buy them, and which outside companies and people to hire to help him do so.

“If we grant the Treasury broad authority to address the immediate crisis, we must insist on independent accountability and oversight,” said Democratic presidential candidate Sen. Barrack Obama. “Given the breach of trust we have seen and the magnitude of the taxpayer money involved, there can be no blank check.”

In recent days, there’ve been few outward expressions of distrust of Paulson in particular. In fact, many said his long reign on Wall Street make him uniquely qualified to deal with today’s problems.

“Hank is the right guy,” New York Mayor Michael Bloomberg, who made his millions providing information to Wall Street traders, told NBC’s Meet the Press. “If I had to have one person at the helm today I would pick Hank Paulson.”

But the conflicts are also visible. Paulson has surrounded himself with former Goldman executives as he tries to navigate the domino-like collapse of several parts of the global financial market. And others have gone off to lead companies that could be among those that receive a bailout.

In late July, Paulson tapped Ken Wilson, one of Goldman’s most senior executives, to join him as an adviser on what to about problems in the U.S. and global banking sector.

Paulson’s former assistant secretary, Robert Steel, left in July to become head of Wachovia, the Charlotte-based bank that has hundreds of millions of troubled mortgage loans on its books.

“The Treasury’s ability to, without oversight, determine (that) a financial institution (is) an agent of the government seems like it could be used to serve several purposes, including limiting the potential liabilities of an institution or its executives,” he wrote in a note to investors late Sunday.

“This seems to invite a risk of collusion between sellers and buyers to the detriment of the taxpayer,” he wrote.

At a minimum, there’s irony in Paulson being in charge of so large a bailout.

In the last annual report at Goldman that Paulson signed off on in November 2005, a year in which he received $38 million in compensation, investors were clearly told that the federal government wouldn’t be there to save them from bad investments.

“Goldman Sachs, as a participant in the securities and commodities and futures and options industries, is subject to extensive regulation in the United States and elsewhere,” the report said.

But those regulations are designed to protect the interests of clients in the market, it said. “They are not … charged with protecting the interest of Goldman Sachs shareholders or creditors,” it said.

That’s a different tune from the one Paulson was singing Sunday.

“Last week there were times when the capital markets or credit markets were frozen,” Paulson said on NBC’s Meet the press. “American companies weren’t able to raise financing. That has very serious consequences. So what we need to do right now is stabilize the markets, and this is for the, for the benefit of the taxpayers we’re doing this, the American public. Then, once we get behind this and get this stabilized, there’s a lot we can talk about in terms of reform.”

What Paulson didn’t say is that the excesses that led to the frozen credit markets couldn’t have happened without Wall Street. Lenders weakened their standards because loans were sold to investment banks, which didn’t much care about the loan quality since they then pooled the loans with thousands of other loans and sold them as bonds to investors. If the whole thing collapsed, it would be the investors who lost out.

Those bonds, called mortgage-backed securities, are precisely the bad assets taxpayers will now be buying back from Paulson’s colleagues on Wall Street.

During Paulson’s tenure, Goldman was not as big a player in issuing mortgage bonds as two other investment banks that have gone under this year, Bear Stearns and Lehman Brothers.

But the 2005 annual report shows that Goldman was still a significant player. Its trading division, which included the mortgage bonds and complex financial instruments called derivatives, reported pre-tax earnings of more than $6.2 billion, up sharply from $3.5 billion in 2003.

The report also shows that Goldman benefited greatly from the wave that is now being deemed a wave of excess.

In 2002, Paulson received $12.1 million in compensation, including a $6.3 million bonus — an improvement over the previous three years when Wall Street accounting scandals unsettled investment banks, including a $1.5 billion settlement Goldman and other banks paid for issuing overly bullish research reports that promoted deals the banks themselves were involved in.

After Paulson left Goldman and mortgage bonds began losing money, the investment bank erased those losses and then some by betting against the very products it had sold, Fortune magazine reported last year.

This entry was posted in RagBlog and tagged Bank Bailouts, Banking, Economic Collapse. Bookmark the permalink.

1 Response to BushCo: Keeping Up the Secrecy and Corruption