This post requires some explanation. We used to live in Redmond, Washington, which is famous for a bastion of corporate Amerika named Microsoft. This has nothing to do with Bustopher except for the fact that he would’ve been termed one of the Microsoft rabbits because that’s where he lived before coming to live with us. Prior by some months to when the great rabbit roundup began, Bustopher moved to our neighbourhood, which was just a couple of miles from the main Microsoft campus. So as all of Bustopher’s sisters, brothers, cousins, aunts and uncles were being unceremoniously caught and hauled away to Sultan to a rabbit concentration camp, Bustopher lounged contentedly in the Grasslawn Park neighbourhood of Redmond, quietly munching grass and dandelions, and other delicious bulbs and flowering plants that we had generously festooned our yards with, all for his benefit of course.

He lived there happily until the end of his days, which someone said came under the wheels of an environmentally insidious gasoline combustion vehicle. I don’t know about that as I didn’t see it, and I certainly hope it isn’t true. Nevertheless, Bustopher befriended us, probably because I gave him pistachios all the time. And he even occasionally let me ruffle his ears, but he always winced a little. He weighed in around 20 pounds – he was a hearty rabbit. And he brooked no nonsense from the cats in the neighbourhood, charging them gallantly and growling until they backed away and left him to his snoozing. Just the sort of pet I’d always wanted – there to say hi, but never to be pesky. And rabbits are exceptionally appealing and gentle little animals. Richard Jehn 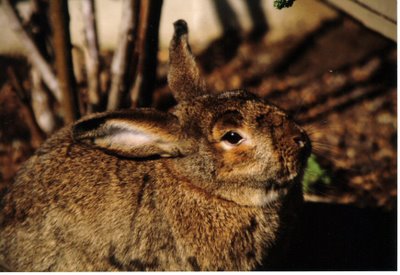