Crassnerd Checks In From the Near Future

New man to sit in Maliki’s chair when the music stops? 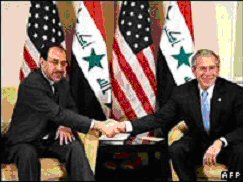 In an apparently unprecedented public show of cynicism for a sitting US president – and some say, of bad taste – George Bush appeared on last Thursday to slander and to crudely dismiss current Iraqi Prime Minister Nouri Maliki, calling him in Spanish a “pendejo” who was “already gone yesterday”, apparently meaning gone from the political scene, said a journalist today who covered the November 30 meeting.

“Este pendejo is ya se fue ayer,” said Bush, in a comment picked up by New York Times reporter’s boom extension microphone. Bush apparently believed reporters had not yet set up their gear, and that none spoke Spanish, said one reporter also at the meeting.

Asked by veteran Washington-beat journalist Robert Martinez, who speaks Spanish, about the comment, Bush said his comment had not been meant to be overheard and was “all in fun between I and the Prime Minister.” Bush did not respond when asked if Maliki spoke Spanish.

Martinez said on Tuesday that “the word pendejo has no literal translation into English.” But many people along the border “think it means a pubic hair, a kind of a sweaty pubic hair,” said Martinez. “It’s like a pubic hair with something still on it from sex, but dried,” he said. “It’s not a compliment,” he added.

Martinez said he was shocked at the time, but thought the comment had no real significance until Monday, when he also covered a meeting between rising-star Iraqi Shia leader Abdel Aziz al-Hakim and Bush.

“It was so heavily scripted, that I honestly have never seen anything like it, even with Bush,” said Martinez, who said Bush had a Teleprompter several feet away from which he appeared to try to read with some difficulty.

First, Bush praised the Shia leader, whose militia until last year fought and killed US soldiers before he joined the Iraqi government more recently.

“I’m proud of the courage of the Iraqi people, but we’re not satisfied with the pace of progress in Iraq,” said Bush, with a smiling Mr. Hakim sitting next to him. 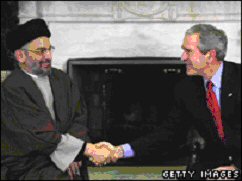 “I would like American troops to remain in the
country,” said Shia leader Abdel Aziz al-Hakim.

Then, Mr. Hakim, apparently also reading from the Teleprompter in halting English, said, “Iraqis should resolve problems by themselves, but I would like American troops to remain in the country,” said Martinez.

The sequence of statements – Bush saying he is not satisfied with progress in Iraq, and Hakim saying he wanted US troops to stay in Iraq – made Martinez think of the earlier meeting in which Bush apparently belittled the unaware Maliki, said Martinez.

“Then you throw in the ‘leaked’ memo the other day, saying Maliki can’t cut the mustard, and it all makes sense,” said Martinez, who has covered the Bush presidency since 2000. “It’s like they’re looking for a ‘new fool by the Whirlpool’ in Iraq, he noted.

A memo from White House security advisor Stephen Hadley became public last week was apparently what Martinez was referring to. In it, Hadley questioned whether PM Maliki fully understood or could control events in Baghdad, and by extension, the rest of Iraq.

Martinez said his biggest shock, which caused him to go public with a story that he says could end his White House access, came when Bush left the meeting with Hakim. Bush, apparently leaving attached to his suit lapel the cordless microphone that had picked up his earlier comment, was met by Vice-President Cheney immediately outside the meeting room, and was heard to speak disparagingly of Hakim as well.

“Dick, I don’t know if either of those two [Iraqi leaders] you found could [defecate] and breathe at the same time,” Bush was heard to say to Cheney.

The Vice-President’s reply was equally shocking. “I could give a [care],” said Cheney. “The troops stay, the ones that live for a while get fed. They get fed, Halliburton gets paid. HAL gets paid, I get paid,” said Cheney. “Six more months and HAL will be out of the hole and my HAL options will be worth something. Now go work out, or better yet, practice reading,” Cheney was heard to say as the two parted.

Services were planned on Thursday for Martinez, whom Homeland Security officials, speaking on condition of anonymity said had died suddenly late Monday night in Guantanamo Bay, Cuba, after apparently mistaking a small amount of polonium 210 for a recreational drug he is believed to have bought soon after what would be his last meeting with White House security officials seeking to clear up questions about whether Martinez was “authorized to make or release the Hakim and Maliki meeting recordings.”

The official said the memorial service might have to proceed “before the actual body is actually returned,” since custodial officers “apparently had lost track of it for now.” “Now there’s no habeas corpus, some of the guys aren’t that careful any more with the bodies,” said the source. “If there are any bodies,” he added.