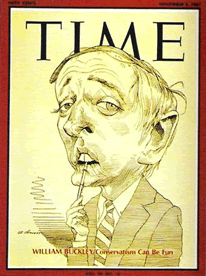 William F. Buckley was a smart man, that’s for sure.

He could throw around more ten-dollar words than his beloved Catholic Church has sinners (even excluding the priesthood). He knew all the right places to ski and the proper wines to drink while listening to this concerto or appreciating that symphony. A product of privilege right down to the French boarding schools he attended, Buckley was as sophisticated, erudite and insightful as they come.

Except on the subject of politics, that is — which just happened to be his life’s great work.

And aren’t we lucky for it?

I mean, what can you say about a guy who wrote “General Franco is an authentic national hero” at the same time he found Dwight Eisenhower too liberal to endorse for president? What are we to make of a lover of democracy who called whites in the American South “the advanced race,” entitled to prevail politically even if they were numerically inferior, and who even left the door open to using violence toward that end?

Heck, for that matter, what can be said of someone so culturally perceptive that he could write, “The Beatles are not merely awful. They are so unbelievably horrible, so appallingly unmusical, so dogmatically insensitive to the magic of the art, that they qualify as crowned heads of anti-music.” (Was it the “We’re more popular than Jesus” quote that rattled you Bill, or were you just jealous about all the screaming chicks?)

What can we say about a guy this spectacularly wrong? Probably he got it best himself when he noted, “I profoundly believe it takes a lot of practice to become a moral slob.” As it turned out, he got a lot of practice.

Buckley is often credited with being the father of modern conservatism (pardon the oxymoron) in America. It is said that before he founded the National Review in 1955, there was essentially no such movement in the country. It is said (no less than by Reagan himself), that the line is drawn directly from Buckley to Goldwater to Reagan. (For some completely inexplicable reason, conservatives usually leave off Gingrich and Bush the Younger from that genealogy.)

Buckley was an astute observer of the human condition, despite keeping, shall we say, a certain polite distance from most of the poor humans who happen to find themselves stuck in that sometimes challenging condition. He was once asked by NPR’s Terry Gross whether being raised in European boarding schools and being a member of Yale’s notoriously elitist Skull and Bones Society hadn’t left Buckley a trifle, um, out of touch with real people (the hoi polloi, that is, as they’re referred to at the Club)? Au contraire!, he skillfully parried. Buckley did a lot of reading and therefore understood people quite well!

So well, indeed, that he came out in support of segregation during the era when the civil rights movement was the most important, the most consuming political question of the day. So who do you think history will judge to have gotten this question right, eh? — Martin Luther King Jr. or Bill Buckley? One could say that Buckley’s position was just about the most spectacular example ever recorded of the missing of a historical train. There was Ol’ Bill (who actually didn’t even have the excuse then of being old), standing on the (whites only) platform, watching the Morality Express go whooshing by.

But then, wasn’t missing just such trains precisely the point of conservatism?

Buckley certainly thought so. In the essay with which he launched the National Review, he committed it and the conservative movement to the project of “stand[ing] athwart history, yelling Stop.”

Yep, that’s actually a bona fide quote from the man himself. If that sounds a bit anachronistic as the grand rallying cry for a modern political movement, you’re — ahem — still not getting it, I’m afraid. The thwarting and reversal of progress is precisely the point of conservatism.

So Buckley launched a movement to yell “Stop!” and they all did, and they were grandly successful, as a matter of fact. For three decades, conservatives have ruled America and stopped progressive change in its tracks. Moreover, they’ve worked assiduously to undo those achievements that so many of us took for granted as the very markers of civilization itself.

Sometimes they have only wanted to unravel a couple of decades worth of history, as when they oppose civil rights, women’s rights or environmentalism. Sometimes it is more on the order of a century, as when they seek to dismantle social safety net programs like Social Security and Medicare. Sometimes their handiwork goes back several centuries, as when they find First Amendment ideas such as separation of church and state to be troublesome, or when they object to that whole pesky checks-and-balances thing. But sometimes it is the work of an entire millennium they wish to unravel, as they rip up the inconvenient notions of democracy itself, expressed as far back as the Magna Carta.

So, how ’bout it folks? Anybody here excited to return our society to the gleaming days of the 12th century? Watch where you step in the street! I mean, um, the latrine. Well, what’s the difference, anyhow? And monarchy is really not so bad after all, you know — once you get used to it. It only has a bad name because it gets treated so unfairly by the liberal press. You know, like George W. Bush.

From Bob Simmons / The Rag Blog