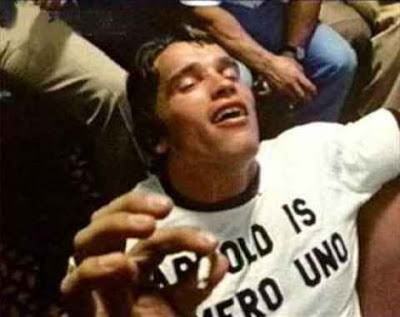 California Governor Arnold Schwarzenegger ‘is known to have extensive first-hand knowledge about the many uses’ of marijuana, is shown taking a break following a workout in the film ‘Pumping Iron.’
California should pay its people in pot

The state could grow its own leafy payroll. Some marijuana will be immediately available from the confiscated stashes that have traditionally been consumed by arresting officers.

California’s state finances have gone to pot, and that’s what it should use to pay its employees.

Right now the state is issuing IOUs to those who work for it. Sacramento says they are worth the paper they’re printed on, but most Californians know that’s true only if they are used to roll joints.

The state’s key available assets are in its farms and fields… and in its prisons and legal system.

Medical marijuana is legal in California. Estimates put last year’s traffic in prescription-approved pot at around a billion dollars. If the state were properly organized to tax that and non-medical marijuana — whose dollar volume is many times greater — it might actually have enough money to pay its employees.

By legalizing marijuana, California could immediately free tens of thousands of prisoners at a savings of tens of millions of dollars. Those quick savings could be a down payment on the salaries of its employees (and cover the unemployment benefits that will be due prison builders and guards who will be laid off).

But they, in turn, could go to work GROWING marijuana. With its huge agricultural resources, California could immediately become the world hub of the legal marijuana trade. (Mendocino and other counties are already vying for this title).

It could also pay its employees if not in dollars, then in pot. Here’s how:

Once the legislature decides to legalize marijuana, the state could go into the business of growing its own. (The offices of the Department of Agriculture are not that far from the Bureau of Prisons.)

Various California cities, including Oakland, are already raising pot to keep prices down for the legal medical trade. So official expertise is readily available. Like the current and previous two Presidents of the United States, the current Governor of California is known to have extensive first-hand knowledge about the many uses of this precious weed.

Thus the state could grow its own leafy payroll. Some marijuana will be immediately available from the confiscated stashes that have traditionally been consumed by arresting officers.

But there will obviously be a gap between the moment of legalization and the moment the first officially grown buds are ready to pick.

So while California waits, it can issue marijuana futures as pay instead of IOUs. The futures would include a special dispensation to sell the existing stashes many of the state employees may already be holding (of course, no state employee would break the law, so these will all be MEDICAL stashes).

Being the first state to legalize, California pot would skyrocket in value. Once the actual buds arrive from the government, state employees would be free to sell their redeemed futures in other states, which will then face a dilemma.

In these hard times, the tourist dollars from those “Okies in reverse” fanning out with their pot to sell will be hard to turn down. So will the potential tax revenues. So the other 49 states will be forced to choose between seeing those hard-earned pot proceeds headed to the Pacific in the pockets of previously impoverished California state employees — or legalizing it, taxing it, freeing their own prisoners, and growing it at home.

Tom Joad will have returned to roost, driving the ghost of a Volkwagen bus.

A dozen states have already legalized medical marijuana, Many are having state budgetary problems of their own.

But California is the only one now issuing IOUs to state employees. Its topography, resident expertise and gubernatorial brain cell history make it an ideal candidate for what is bound to come, sooner or later. Why not now?