Call Your Senator About the Global Poverty Act 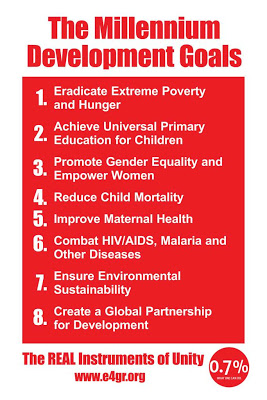 The Global Poverty Act: The Most Important Bill You’ve Never Heard Of
by Caroline Schley

Hopefully you’ve heard of the Global Poverty Act. If not, here’s 30 seconds worth of sounding enlightened at the water cooler: The Global Poverty Act, written by Congressman Adam Smith [D-Wash], would require the President “to develop and implement a comprehensive strategy to further the United States foreign policy objective of promoting the reduction of global poverty, the elimination of extreme global poverty, and the achievement of the Millennium Development Goal of reducing by one-half the proportion of people worldwide, between 1990 and 2015, who live on less than $1 per day.” This would be an important step towards ensuring that the United Nations community addresses the eight Millennium Development Goals before the 2015 deadline. The Millennium Development Goals are, in short, a United Nations plan to ensure that cruel and severe global poverty and injustice are addressed in the international community. Besides poverty they address issues such as infant mortality, AIDS, education, and the environment.

I can hear you asking yourself, “So, what’s the problem? These all sound like very nice ideas.” The House of Representatives thought so, too. They passed the bill last year with an overwhelming bipartisan majority.

Now the bill is in the Senate and Barack Obama is one of the point people spearheading the effort to collect support. Barack Obama … sound the bells for all possible attempts at negative publicity from the Republican camp before November. Conservative publications are blasting the Global Poverty Act left and right (mostly right), claiming it will allocate $845 billion worth of additional foreign aid spending from the United States. While we are having a recession! And an oil crisis!

Here is the thing that has been overlooked in all the hysteria: The Global Poverty Act does not allocate any spending. None, whatsoever, at all. The bill emphasizes cooperation from all United Nations countries, as well as international businesses and NGOs. It calls for better organization of international relief efforts and associations already in place and a review of trade policy and debt relief policy. The bill calls for a US strategy to combat global poverty. It calls for the President to form a plan that includes specific and measurable goals and benchmarks. But the Global Poverty Act does not mandate additional foreign aid commitment.

An official strategy to eliminate global poverty would be beneficial to the United States in several ways. First, as stated by the US National Security Strategy in 2002, “[A] world where some live in comfort and plenty, while half of the human race lives on less than $2 per day, is neither just nor stable. Including all of the world’s poor in an expanding circle of development and opportunity is a moral imperative and one of the top priorities of US international policy.” Conditions of extreme poverty create conditions of social and political unrest. It is imperative to our homeland security and to our international peacekeeping efforts that we combat this problem. Second, the eradication of extreme poverty would create a more favorable global economy. It would create new consumer markets for US goods. Forty-three of the top 50 current consumer nations of American agricultural products were once recipients of United States foreign assistance. We are creating economic markets for our own country.

The United States has made considerable advances so far to combat poverty, a list that includes impressive measures such as the Millennium Challenge Act, the African Growth and Opportunity Act and participation in a G-8 pledge of increased aid funding to Africa. The Global Poverty Act would build off of these impressive efforts and create a model for other UN countries to follow in coming through with their pledge to eradicate global poverty. It is important for the US to be a leader in this fight.

[Ed. note: The Wild Sky Wilderness bill overcame a hold by Sen. Coburn a few months ago through parliamentary maneuvers by Congressional Democrats. They can do the same to move the Global Poverty Act–if they’re motivated to act.]

This entry was posted in RagBlog and tagged Foreign Policy, Global Economy, Poverty. Bookmark the permalink.